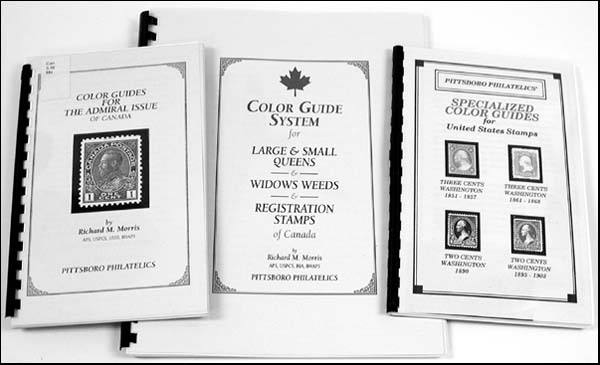 One of the basic ways that collectors identify stamps is by their colors or hues.

The names by which stamp colors are known, how to identify them and how to differentiate among similar shades of some colors are perennial sources of confusion for many stamp collectors.Yet correct identification of a given stamp's color and shade can be a major challenge for stamp collectors.

Articles in the hobby press well back into the last century have titles such as "The Problem of Color Names," "The Color Problem" (three different articles, from 1939, 1953 and 1990), "Color Me Confused," "This Puzzling Subject of Color," "Identifying Color Shades Is Tricky Business" and the sadly dubbed "Eternal Colour Problem."

Several difficulties are at work here. One is that names for stamp colors, as given in the standard catalogs, are not always easy to understand.

Other problems relate to the nuances of color perception (how the human eye perceives a particular stamp's color, individually or in comparison with stamps of supposedly identical or similar hues) and color reproduction (accurately rendering color in printing), and the light used to view a stamp.

Color naming is an issue that required some sort of resolution prior to the publication of the first stamp catalog. I doubt that anyone now living knows the rationale for many of the choices.

Not surprisingly, catalog publishers today continue to use whatever names were decided by their predecessors, even though some names may be confusing. Trying to change to new color names would likely result in catalog color chaos.

A stamp collector beginning in the hobby today will open a stamp catalog and see color names that he may see nowhere else in daily life, the color called "lake," for example. It is not blue or green or brown, as various large bodies of water can be, but a purplish shade of red. The name comes from an Arabic word for purplish-red dye.

Some lake-colored U.S. stamps in catalog listings are in series with other stamps with the color names carmine, scarlet, carmine rose and rose carmine.

Stamp catalogs do have some stamps simply called red, but there are also pink, carmine lake, red violet, magenta, rose and rose red.

Why does it matter? Color identification is an important concern for anyone engaged in the serious pursuit of stamps.

As a result, a very common collector question is, "Where can I find a guide to stamp colors?"

There are several general color guides on the market, including one published by Stanley Gibbons, the British stamp and stamp catalog firm. The Gibbons guide uses 200 Stanley Gibbons color names

Scott Publishing Co. does not publish a color guide keyed to its catalog. Scott publisher Stuart J. Morrissey said in a 1990 article that there were no plans to do so because it is simply not possible to produce an accurate color guide true to the exact colors of the stamps.

That rationale was reiterated in a Linn's Question Corner in the March 11, 1996, issue. The article stated that Scott declines to issue a color guide because of "the general criticism of guides" such as the Gibbons guide and the Michel guide, namely, a lack of common descriptive color names among the various catalogs and lack of consistency between colors of the same name in different time periods.

In 2000, Amos Hobby Publishing, the parent company of both Scott and Linn's, began offering three specialized color guides that contain color chips made by the Munsell firm for its Munsell color system.

The guides are the creation of collector Richard M. Morris, with help from many specialist collectors. Morris published his first guide in 1995.

These guides are based on chips that are coated, not printed. The chips are cut from larger sheets that are carefully made by Munsell under exacting conditions.

The 1996 Linn's Question Corner also said, "the unaided human eye can detect as many as 10 million colors under optimum conditions." This comment addresses another facet of color in general and color guides in particular.

Light is one small part of the electromagnetic spectrum. Other parts include x-rays and radio waves. What we call light is the portion of the spectrum to which the human eye is sensitive.

Colors are perceptions of light, and they vary from one person to another. The green you see is not exactly the same green that your stamp pal sees.

Some years back a letter to the editor in Linn's related how the writer and his daughter had argued for years over the colors of the stamps in their collections.

After the writer had cataract surgery, among the many visual treats he enjoyed were his stamps, which had amazingly changed and become the colors his daughter had been saying they were.

Color perception differences, congenital or acquired, are fairly widespread. Some sources estimate that as many as one in 12 males may have reduced color perception capabilities. Color problems are less common, but not unknown, among females.

The colors of most newly printed stamps are not permanent. The chemicals in the inks degrade over time. Acid in the papers spur deterioration. Light, heat and humidity can affect the speed of the breakdown or oxidation.

The ink of some orange stamps is notorious for leaching sulfur and turning brown or black. Many collectors believe that they have found a rare color error, when it's really just a stamp showing its age.

Stamps that change color as a result of aging or environmental factors are called color changelings.

Leave a book open long enough under a lamp or, worse, sunlight, and the inks become pale shades of their former selves. Your stamps and other paper collectibles would suffer the same fate.

Stanley Gibbons Inc., the New York subsidiary of the British firm, decades ago published the booklet U.S. Envelope Guide for Stamp Collectors. This guide used swatches clipped from actual envelopes to illustrate more than 40 different kinds and colors of papers used in the printing of U.S. stamped envelopes.

One copy shows much less aging than the other, but both the paper and the envelope paper samples have changed color since the 1930s. Some of the envelope samples are dried out and are shades away from their original colors.

The more badly aged APRL copy shows dramatic change. Most of the samples are very faded in comparison both with those in the better copy and with the original envelope colors. The paper the book is printed on is brittle and yellowed.

This copy may have been left open on a desk, perhaps near a window or other light source.

In any event, as a color guide to U.S. envelopes, this book is useless.

x-rays, spectrophotometers and other devices.

A scholarly but less obscure study of color was published by R. H. White in 1979, Color in Philately, available on loan from the APRL. It criticized the subjective color names used in stamp catalogs and suggested the use of the Munsell color system, which is used in industry.

But even White reverted to color names in his next work, Encyclopedia of the Colors of United States Postage Stamps (1981 and following years).

So what's a stamp collector to do? If no two stamps have aged exactly alike, and no printed guides are permanently accurate, and no two people see the same, how can color questions be answered?

Guides based on swatches, such as the Morris guides for specific stamp issues, are the best one can do, other than having a large reference collection of worldwide stamps.

For potentially valuable stamps, the usual method is to send the item to be expertized. In expertizing, the stamp is examined by acknowledged experts who may render an opinion on the identification and condition of the stamp.

Sometimes even experts cannot make a determination, in which case they will decline to render an opinion.

And how do the experts decide? They trust their eyes, but they also have other tools.

Experts look at many stamps over long periods of time. Not surprisingly, the more stamps you see, the better trained your eyes become at seeing differences and similarities.

You don't have to limit your observations to the stamps that you own. You can train your eye by viewing exhibits, by examining dealer stocks, by looking at sales books and at your friends' collections, and by reading books and studying printed examples of stamps.

One aspect of an expert being an expert, however, is access to a reference collection: examples of actual stamps and often many examples of the same stamp.

A reference collection need not contain only top-quality stamps. A torn or creased stamp that would be expensive if it were not damaged works fine as a basis of reference.

The editors of the Scott catalogs have a basic reference collection to use for color descriptions for new listings.

The American Philatelic Expertizing Service has a huge collection of forgeries and genuine worldwide stamps to use for comparison.

A September 1986 Scientific American article titled "The Colors of Things," by Philippe Brou and colleagues, postulated that perceived colors depend on "a comparison of the light from an object and its surroundings."

The role of light in relation to viewing color is vital. A short piece in the American Philatelist in October 1917 mentioned that a standardizing instrument called a "colorimeter" was being used at the Bureau of Engraving and Printing to measure "the exact hue and intensity of every printing ink."

The writer went on to say, "Of course, the real value of a color can be judged only by daylight," and the colorimeter accordingly was used with an instrument that produced artificial daylight, "a 500-candlepower tungsten lamp with a peculiar blue-glass screen that yields an illumination absolutely colorless, like daylight."

Somehow, between 1917 and the present, this important point about stamp color viewing as affected by light became lost. Perhaps it is because we became so accustomed to living our lives in artificial lighting provided by either incandescent or fluorescent lights.

So called full-spectrum lighting has become more common in recent years, with media reports about how it can relieve the symptoms of a malady known as seasonal affective disorder, a depressive problem related to the lack of sunlight.

Many sufferers feel better after spending some time each day in the glow of a full-spectrum light, which mimics broad daylight.

Like the tungsten lamp used at the BEP in 1917, full-spectrum lights cast a cold, blue light that is very different from the warm glow of incandescent and fluorescent lamps.

The first readily available full-spectrum lights were manufactured under the trade name Ott-Lites.

These are still available, but many of the major lighting companies also have their own full-spectrum bulbs.

A full-spectrum light fixture is a must in any stamp den. It can vastly improve your ability to deal with color questions and will simply increase your visual enjoyment of your collection.