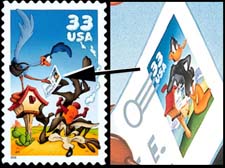 Postal authorities worldwide have long recognized that stamp collectors are among their best customers. To show their appreciation, the postal agencies often celebrate stamps and stamp collecting through images or text on postage stamps, postal stationery, pictorial postmarks and more. After all, it isn't often that someone pays good money for a service that they don't plan to use. When you think about it, that's what happens when you buy a mint postage stamp and put it into your collection.

If you purchase and save the pane of 15 Celebrate the Century stamps shown in this issue of Linn's, that's 15 first-class letters that the United States Postal Service doesn't have to deliver, even though it was paid in full for the service.

Some postal authorities go overboard when they cater directly to their stamp-collecting customers — by manufacturing and selling too many different stamps. That's the number one complaint of collectors who voluntarily quit the stamp hobby: it's too expensive to keep up with the many varieties that are being issued.

Who remains when these new-issue collectors quit? Mostly collectors who specialize in postal history or classic stamps, collectors who often have little or no interest in the latest topical issues on the market.

Let's get back to the topic at hand, though: the ways that stamps and stamp collecting are frequently commemorated by postal authorities. Sometimes this commemoration seems accidental, as with the recent 33¢ Wile E. Coyote & Road Runner stamp from the United States. As described in an article that appeared on page 1 of the April 17 Linn's, the cartoon bird Road Runner is shown in the stamp holding mail addressed to his nemesis, Wile E. Coyote, who lies prone in the dust below. The envelope in the design is franked with the 33¢ Daffy Duck stamp issued in 1999.

The Road Runner stamp is shown at left in Figure 1. At right is a closer look at the mail the bird is holding.

More often than not, when a postal bureau features a picture of a stamp on one of its modern issues, it is promoting stamp collecting or a special stamp hobby event. Many countries celebrate annual stamp collecting days and issue special stamps to mark the day. Often these stamps show other stamps. One example is the 1972 Stamp Day stamp from Germany-Berlin, Scott 9N334. It shows sheets of stamps as they run through a printing press.

Figure 2 pictures a 30¢ postage stamp from Australia issued in 1984 (Scott 925), one of several issues from that country marking the 1984 Ausipex stamp exhibition. The main design element of the stamp is the 1913 1¢ red Kangaroo stamp, Australia Scott 2.

In 1986, Australian postal authorities honored another stamp exhibition by picturing two classic stamps of the South Australia colony on a stamped envelope issued July 30, 1986, shown here in Figure 3. The 33¢ imprinted stamp pictures the 2-shilling carmine stamp of 1867 (Scott 53). The cachet (pronounced "ka-SHAY") is the large design on the left side of the envelope. It shows the 6-penny blue-green stamp of 1904 (Scott 137). The inscription below the cachet reminds one and all to attend the international show called Stampex 86 in Adelaide.

The last United States issue to specifically mention an upcoming stamp show was released April 10, 2000. The five new 33¢ Edwin Powell Hubble stamps show deep space images, not classic stamps, and there is no mention of the show on the stamps themselves. However, a message is printed in small type on both sides of the stamp pane's margin paper, encouraging visitors to World Stamp Expo 2000, July 7-16, in Anaheim, Calif. More information about the Hubble stamps and the stamp show inscription is published in this issue of Linn's on page 12 (in print).

Besides the Looney Tunes stamps previously mentioned, the last U.S. stamp to prominently feature another stamp in the design was one of the four stamps in the 1993 National Postal Museum issue. The 29¢ Miner's Letter stamp (Scott 2782) pictures four classic U.S. stamps in one design.

Some machine cancels are also designed to promote the stamp hobby, in the United States and in other countries around the world. Figure 4 shows a 1966 machine cancel from Switzerland with the message "Sammelt SCHWEIZER Briefmarken," which translates as "Collect Swiss stamps." As part of the slogan cancel, a fictitious stamp design is shown, with the inscription "HELVETIA" (the name for Switzerland that appears on Swiss stamps) and the image of a post horn.

There are many different ways that one can enjoy collecting stamp-on-stamp issues or other philatelic material specifically related to the stamp hobby. One collector group in the United States focuses on the stamp-on-stamp topic.

If you have access to the Internet's World Wide Web, you can visit the SOSCC home page at http://ourworld.compuserve.com/homepages/soscu/soscchp.htm for additional information.

The Refresher Course column in Linn's issue of Jan. 31, 2000, concerned the ever-increasing worldwide popularity of variable-denomination stamps. These machine-vended stamps can be purchased in post office lobbies or similar public places. The customer selects the postage value needed, and the machine imprints the denomination on the stamp and dispenses it to the customer.

Some of these stamps are quite plain and might be mistaken for simple postage meter labels. Others are very decorative, often printed in full color, with a remarkable variety of pictorial designs.

Many collectors save entire covers (mailed envelopes or similar items) that are franked with variable-denomination stamps. Others have tried to soak the stamps free of envelope paper, but soaking can, in some instances, be disastrous.

Linn's reader John F. Heiss wrote to share his experience with Spanish variable-denomination stamps that he received on envelope clippings from a friend. "I collect postally used stamps, removing them by soaking in water," Heiss wrote.

"I found that these [variable-denomination] stamps lost their colors before the stamps floated free of the paper (which they did not do). Enclosed is an unsoaked stamp for your comparison."

The designs of the two stamps Heiss sent are nearly identical, though some of the imprinted information differs. Soaking in water seems to have dissolved much of the ink of the stamp's design but did nothing to loosen the stamp adhesive.

In the photo shown here, the stamp at top is the soaking victim, still holding tight to the envelope paper on which it arrived. The postally used unsoaked stamp is at bottom.

Heiss suggests that his Spanish stamps are best collected on cover, or at least on paper.

Collectors who feel compelled to soak should be aware that there is a greater risk that variable-denomination stamps will suffer damage from a simple soaking than the average adhesive postage stamp. Although a bath in water usually works fine for soaking postally used postage stamps, it's a good idea to keep variable-denomination stamps high and dry.