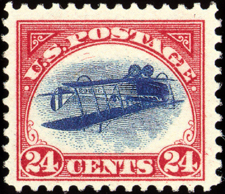 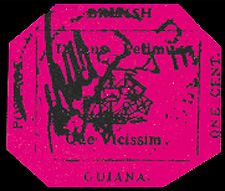 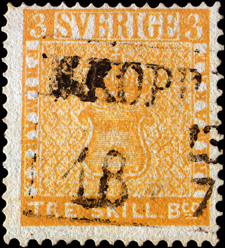 Figure 3. The Three Skilling Yellow, a rare color error of the first stamp from Sweden. 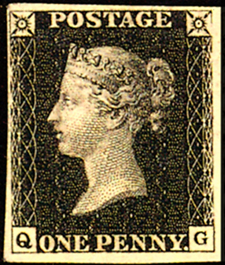 Figure 1. The 1840 Penny Black from Great Britain.
Previous
Next

The real celebrities of the stamp hobby have always been the postage stamps themselves, from the very first issue of 1840 to the greatest rarities of all time.

While some stamps are so common they seem to turn up in every collection and mixture, others are much harder to find. These rarities have achieved a reputation that places them foremost among the true gems of philately.

Some of the shining stars of the stamp world are incredibly rare, and there are instances where only one known example of a given stamp has ever been verified. Other famous stamps are a little more plentiful but still draw the attention of collectors because of their place in the history of the stamp hobby.

Following are the biographies of six well-known stamps from five different countries. The stamps described here have all been known for many years by special nicknames that many collectors recognize immediately.

Let's begin with the first adhesive postage stamp issued by any country in the world, honoring a young queen shortly after she ascended her country's throne at the tender age of 19.

The Penny Black is known primarily for being the first adhesive stamp created and sold by any national government for the prepayment of postage. It was issued by Great Britain May 1, 1840, following a campaign by Rowland Hill to make mail services available to all by simplifying Britain's complicated system of charging for the delivery of mail.

The design of the stamp reproduces a portrait of Britain's Queen Victoria, who was ruler of England when the new postal reforms were put into effect.

A delicate engraved pattern makes up the background of the design, and a small alphabet letter appears in each of the two lower corners. These letters tell the position of the stamp in the full sheet of 240 stamps (20 horizontal rows of 12 stamps each).

The letter in the left corner indicates the horizontal row, and the letter in the right corner gives the exact position in that row, with A indicating the first row or position, B the second and so on. For example, a stamp with the letters B and C in the left and right lower corners, respectively, show that the stamp comes from the second horizontal row (B) and was the third stamp in the row (C). The Penny Black shown in Figure 1 is marked with the letters Q and G, so it came from the 17th horizontal row (Q), seventh position (G).

The Penny Black is not a rare stamp, but it is rather expensive. An unused stamp is valued in the 2001 Scott Standard Postage Stamp Catalogue at $3,000, and a used one is valued at $180.

While the Penny Black is a costly stamp, it pales in comparison to the values for the first two issues of Mauritius.

A 1993 auction by David Feldman of the Hiroyuki Kanai collection of Mauritius resulted in numerous record-setting prices, including the sale of one unused example of each of the first two Mauritius issues. The 1d orange stamp sold for $1,072,260, and the 2d blue sold for $1,148,850. Both amounts include the 15 percent buyer's premium.

Only one example of the 1d stamp is known in unused condition, while three unused 2d stamps are known.

Mauritius is a small island in the Indian Ocean encompassing about 720 square miles. It is more than 500 miles east of a much larger island, Madagascar, which is located off the southeast coast of the African continent.

The first two Mauritius stamps were also the first stamps authorized by any British colonial government.

A local engraver named Joseph O. Barnard prepared the two designs, which, like the Penny Black, show the image of Queen Victoria.

One peculiarity of the two stamps is that they are inscribed with the words "POST OFFICE" along the left edge of the design. Later issues of nearly identical design were marked "POST PAID" instead.

These 1848 Post Paid issues (Scott 3-6) are also somewhat rare, but not nearly to the extent that the Post Office issues are. Only 500 each of the Mauritius Post Office stamps were printed, and most have been lost forever.

A few rare covers bearing one or both of the stamps also survive, and they command enormous sums when they are sold.

The only known cover bearing one each of the two Mauritius Post Office stamps sold at the 1993 Feldman auction for $3,829,500, the highest price ever paid for a single philatelic item.

Some stamps are cherished because they are rare. Others are distinguished by the fact that they are errors that show some major mistake in production.

However, as the name of the stamp implies, the Three-Skilling Yellow is a shade of yellow that is close to orange. And there is only one example known.

It is thought by some that the Three-Skilling Yellow error may have been created when a cliche (the printing element showing a single stamp subject) of the 3sk value was inadvertently used during the printing of the yellow-orange 8sk stamp of the same issue.

The unique Three-Skilling Yellow error was discovered in 1885 by a youngster in Stockholm named Georg Backman, who sold it for 7 krone a few months later.

In the intervening years the Three-Skilling Yellow has been owned by many wealthy collectors. During the 1990s the stamp was auctioned twice by the David Feldman auction firm, but according to reports, the winning bidders in both sales did not pay in full for the stamp, and in 1998 it reportedly was finally sold privately to an anonymous collector.

The stamp is currently listed in the Scott catalog without a value, but it is certainly one of the most valuable stamps of all time.

East of Venezuela, on the northern coast of South America, is a small country that is now called Guyana. In 1856 it was British Guiana, a colony well-known among stamp collectors because of its notorious Penny Magenta stamp.

Printed by typeset in black ink on magenta (red) paper, the example shown in Figure 4 is believed to be the only one in existence. Despite its rarity, the stamp is not much to look at. It is cut into an octagonal shape and is marked with a very heavy cancel.

For the past 10 years or so, a stamp owned by a German opera singer named Peter Winter has been put forward as a possible second Penny Magenta, but the stamp was declared an altered example of a damaged 4¢ magenta following expert examination by the Royal Philatelic Society of London.

The story of the genuine Penny Magenta, retold by senior editor Rob Haeseler in the July 3, 2000, issue of Linn's,is in itself remarkable.

A 12-year-old boy named Vernon Vaughan found the Penny Magenta in Demerara, the capital of British Guiana, in 1873. He sold it to stamp collector N.R. McKinnon for six shillings, or about $1.50.

Over the years the stamp has been owned by some of philately's greatest collectors, including Count Philippe Ferrari and Arthur Hind. In 1980 the stamp was consigned to the Robert A. Siegel firm of New York, who auctioned it for $935,000 to chemical-fortune heir John E. duPont.

In 1997, duPont was convicted of murdering a wrestler he was sponsoring. The only known British Guiana Penny Magenta remains locked in a bank vault in Philadelphia, Pa.

The Inverted Jenny is not the scarcest United States stamp, and it's also not the most valuable, but more people can tell you about the stamp with "the upside-down airplane" than about any other U.S. stamp rarity.

On May 14, 1918, a 29-year-old stamp collector named William T. Robey went to a Washington, D.C., post office to buy some of the new 24¢ airmail stamps that had just been placed on sale. The stamps were the first airmail issue of the United States, and Robey purchased a full pane of 100, a pretty expensive purchase at $24.

When he looked at his stamps, however, Robey realized his money was very well spent, for all 100 stamps were printed with the blue airplane in the center flying upside down within the carmine red frame.

The printing mistake is called an invert. The red and blue parts of the design were printed in separate passes through the press, and when the sheet containing Robey's stamps was inserted to receive the image of the airplane, it was inserted upside down, causing the error.

Robey hurriedly left the post office with his prize. Word of the discovery circulated quickly, but no other Jenny inverts were ever found. The stamps were sold within a week to an eccentric millionaire, Col. E.H.R. Green for $20,000. Robey received $15,000 from the dealer who brokered the sale.

Col. Green eventually broke the pane up into single stamps and blocks, retaining some of the stamps but selling many to interested collectors. Singles and blocks of the inverted Jenny have been bought and sold with some regularity over the years, and the values have, of course, increased substantially since the days when Col. Green was selling individual stamps for $250.

Because of its condition and centering, the stamp illustrated here in Figure 5 is among the finest examples of the inverted Jenny known. It was sold May 13 by Siegel Auction Galleries of New York for $155,000.

Many other stamps are incredible rarities, including some with values far greater than those of the inverted Jenny or the Penny Black.

The six stamps described here, however, are almost certainly the most famous issues cherished by stamp collectors. Some of these legendary stamps can be viewed from time to time at major stamp shows and exhibitions around the world.

The stories of these celebrated stamps and many others are told in the Linn's five-book series Philatelic Gems by Donna O'Keefe.

For ordering information check the Linn's Bookstore, or contact your favorite dealer in philatelic literature.