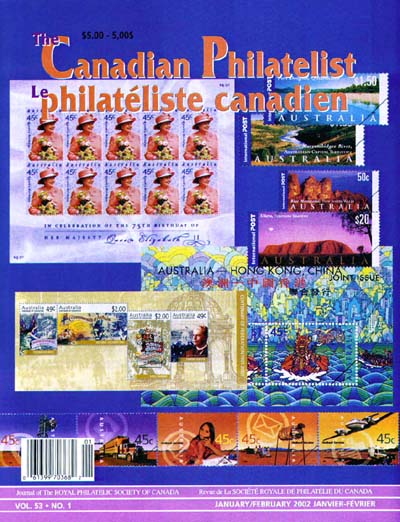 The Royal Philatelic Society of Canada publishes the Canadian Philatelist six times a year. Click on image to enlarge. 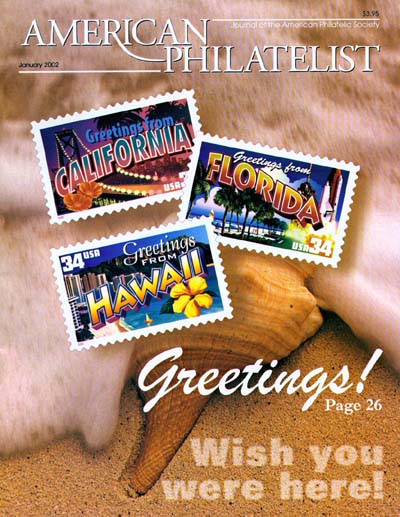 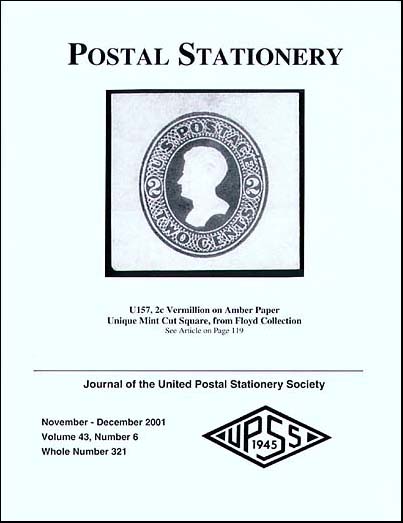 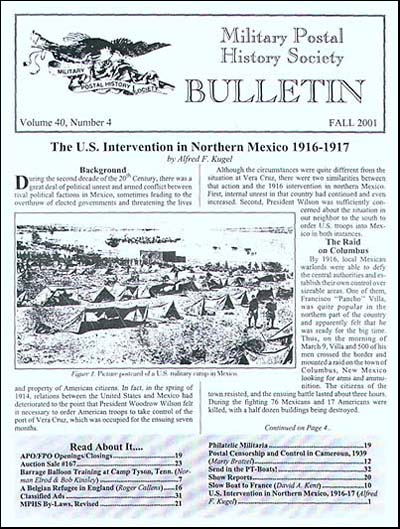 The Military Postal History Society publishes a quarterly bulletin. The society auction is a popular feature of the journal. Click on image to enlarge. 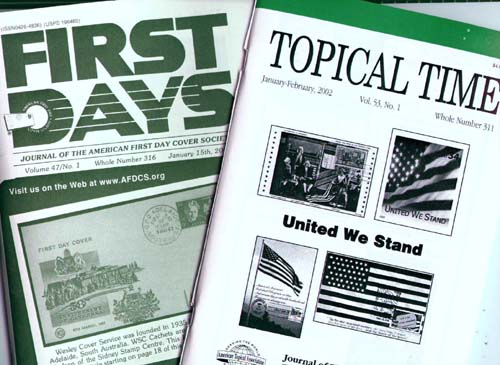 The American First Day Cover Society issues First Days eight times a year, and Topical Time is a magazine produced six times a year by the American Topical Association. Click on image to enlarge.
Previous
Next

Stamp collecting is generally looked upon as a solitary hobby, and stamp collectors are presumed to be introverts. Yet most cities and towns of moderate size have stamp clubs where collectors can gather to socialize, swap and share their knowledge and love of the hobby.

If you have never been to a stamp club meeting, you might not know what you are missing. You might also be intimidated about walking into a room full of strangers. Just remember that everyone was once a stranger, and you are only a stranger once.

All stamp clubs are different, but most share similarities. There is usually a business meeting followed by a program of some sort. The program might be a guest speaker, a slide presentation, an auction, a how-to clinic, a swap session or other type of information or entertainment. Some clubs even provide refreshments.

Some larger clubs provide even more enticements to maintain their membership. For example, the Indiana Stamp Club of Indianapolis sets up a small dealers' bourse before its meetings where club members can shop and sell. This club also conducts a clothesline exhibit, a question clinic, a mini-auction and a stamp hunt at each of its meetings. Attending a meeting of the Indiana Stamp Club is a real treat. Contact the club at Box 40792, Indianapolis, IN 46240 or visit its web site at http://indianastampclub.org.

The Worthington Stamp Club, 395 Broadmeadows Blvd., No. 211, Columbus, OH 43214, gives stamp bucks to its members. If a member attends a meeting, serves as an officer, gives a program or contributes to the club in any number of ways, he earns stamp bucks that may be used at club auctions to purchase stamps, covers or other collecting goodies.

The Oregon Stamp Society, Box 18165, Portland, OR 97218-0165, owns its own meetinghouse, a former fire station. Within its walls is an impressive philatelic library. Visit its web site at www.oregonstampsociety.org.

At all of these clubs, and at hundreds more across the country, you will find friendly, helpful folks who love the hobby and want to share it with you.

Joining one or more specialist societies is another good way to learn more about your hobby and to meet like-minded people who share your specific interests. There are societies for almost every imaginable philatelic specialty. These groups offer a variety of services. The most important, arguably, is their journals or newsletters. Careful reading of the specialist society journals is the best way to become an informed, knowledgeable collector.

It is impossible to mention all specialists' societies in this article, and this representative sampling will barely scratch the surface of those available to Linn'sreaders:

The American Topical Association, Box 50820, Albuquerque, NM 87181-0820 (web site at http://home.prcn.org/~pauld/ata/). The six-times-a-year journal Topical Time,shown in Figure 1, is one of the perks of the $20 ATA membership fee. The ATA publishes handbooks and very useful checklists on a huge number of popular topicals. The ATA also hosts its own annual stamp show, National Topical Stamp Show.

The International Society of Worldwide Stamp Collectors, Box 150407, Lufkin, TX 75915-0407. Worldwide collectors will find much to love about the ISWSC. The dues are surprisingly low at only $12 per year. Members receive the journal the Circuit (six issues per year) sales circuits, swap circuits, auctions, stamp identification services, and support for young collectors. It is a very friendly organization, and its mentor service is especially useful for beginning collectors.

The Postal History Society, Box 61774, Virginia Beach, VA 23466-1774. Annual dues are $30 for the PHS, which publishes Postal History Journal three times a year. This journal is the essential periodical for those interested in worldwide postal history. The PHS has an annual meeting in conjunction with stamp shows throughout the country.

The United Postal Stationery Society, Box 1792, Norfolk, VA 23501-1792 (web site: www.upss.org). Very modest $18 dues go a long way with the UPSS. Members receive the informative and nicely produced journal Postal Stationery (six times per year), shown in Figure 3, discounts on a surprising array of handbooks and publications, and the opportunity to meet other collectors at two annual conventions held throughout the country at stamp shows you might be attending.

United States Stamp Society, Box 6634, Katy, TX 77491-6634 (web site at www.usstamps.org/). The USSS was formerly known as the Bureau Issues Association. USSS dues are $25 and include a monthly journal, the Specialist,devoted to all aspects of U.S. philately. The USSS publishes handbooks and holds annual conventions. If you are a U.S. stamp collector, you should be a member.

The Universal Ship Cancellation Society, 747 Shard Court, Fremont, CA 94539 (web site: www.uscs.org) is dedicated to the study and collection of postmarks and covers from all maritime services. It publishes the U.S.C.S. Log monthly. In addition to the monthly journal, $20 annual membership dues include a copy of the USCS Handbook and access to study units, local chapters, sales circuits, a ships photo library, postcard sales, an heirs and estate service, and an annual convention and regional meetings.

The Germany Philatelic Society, Box 779, Arnold, MD 21012 (web site www.gps.nu) is affiliate No. 48 of the American Philatelic Society. It publishes the German Postal Specialist monthly. The GPS has 13 study groups for areas ranging from early Empire stamps to the Weimar Republic inflation period to the German Democratic Republic. Membership is $22 annually plus a $2.50 first year administration fee.

The International Society for Japanese Philately, Box 1283, Haddonfield, NJ 08033 (web site: www.isjp.org) publishes Japanese Philately six times a year. The ISJP is devoted to all areas of Japanese philately. In addition to its journal, it also publishes monographs too long for inclusion in the journal, and it offers an expertization service for its members. Membership is $12 a year.

The Ethiopian Philatelic Society, 5710 S.E. Garnet Way, Milwaukie, OR 97267 (web site: http://home.attbi.com/~fbheiser/ethiopia5.htm) is APS affiliate No. 145. The EPS publishes Menelik's Journal on a quarterly basis. Annual dues of $7.50 bring a subscription to the journal and access to the library and mail sales.

Two organizations that cannot be considered specialist societies are worthy of note.

The first is the American Philatelic Society, Box 8000, State College, PA 16803-8000 (web site at www.stamps.org). The services available to its members are almost too numerous to list here. The $25 annual membership includes the colorful monthly magazine American Philatelist, shown in Figure 4, and brings a number of perks: discounts on APS publications and expertizing services, sales circuits, youth programs, educational programs, access to buy and sell at its Internet sales division, slide programs, use of the magnificent American Philatelic Research Library and the annual Stampshow and APS winter shows.

The northern counterpart of the APS is the Royal Philatelic Society of Canada, Box 929, Station "Q", Toronto, ON, Canada M4T 2P1 (web site at www.rpsc.org). Dues for the RPSC are $30 U.S. and include the six-times-a-year Canadian Philatelist, shown in Figure 5. The RPSC also has sales circuits, slide programs, and other services. Its web site is especially useful for the library of informative articles it contains.

A list of clubs and societies can also be found on Linn's web site.

Joining a local stamp club and one or two specialist societies will pay big dividends with knowledge gained and new friends made.