Do secrets hide in your collection of stamps and covers? 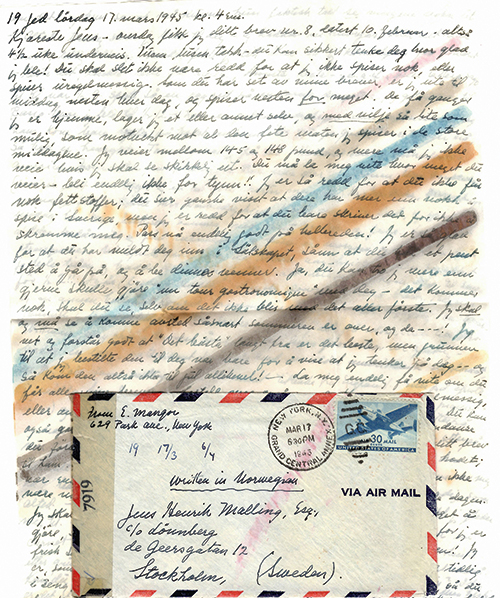 This letter sent from New York to Stockholm in March 1945 was treated with chemicals in order to test for invisible writing. 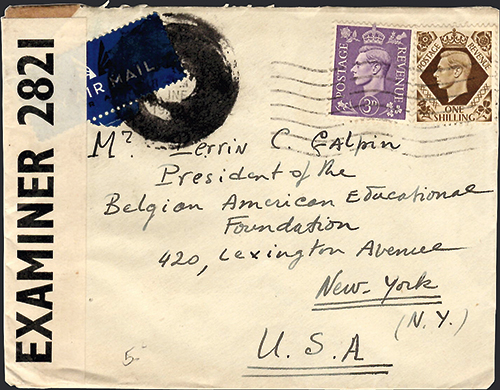 Mailed from England during World War II, this cover was censored to render the postal marking unreadable, concealing the place of origin.

Some of Great Britain’s asterisk time codes in postmarks had minutes as well as the hour of mailing. This Cheltenham postmark can be decoded to indicate a mailing time of 7:15 p.m. The postmark is shown enlarged at right. 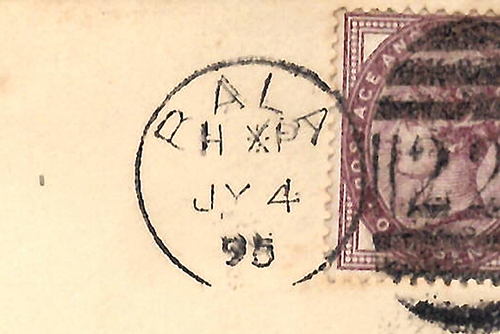 Asterisk time codes using letters and numbers were added to British postmarks beginning in 1894, noting the mailing time. This marking from Wales was applied at 8 p.m., July 4, 1895.
Previous
Next

Stamps, envelopes, and letters contained within the envelopes sometimes hold secrets. Finding those secrets and investigating them can turn a stamp collector into a stamp sleuth.

The secret is a special element in the postmark called an "asterisk time code."The canceled stamp shown here in the first illustration hides a secret perpetrated by the British Post Office beginning in 1894, in an effort to better track the speed with which mail was handled during Victorian times.

The postmark is from Bala, Wales, on July 4, 1895. Just below "BALA" in the postmark are the letters H and P separated by an asterisk. The letter H, the eighth letter of the alphabet, represents 8 o'clock, and the letter P stands for P.M. So this asterisk time code identifies the letter as being postmarked at 8 p.m. on July 4, 1895.

In asterisk time codes, the hour is always indicated by letters A through M (J is not used): A equals 1, B equals 2, and so on, right through M being 12.

On some other postmarks, minutes were added.

The next illustration shows a cover sent from Cheltenham on Aug. 22, 1894. The asterisk time code in these postal markings is "GC*P." Using the hour code, G equals 7 o'clock. The minutes, however, work in five-minute increments, in which A equals 5, B equals 10, and so on right through 55 for L (again, J is not used).

This means that the C in the Cheltenham postmark is for 15, and the entire asterisk time code of "GC*P" translates to 7:15 p.m.

It was a clever idea, but on Dec. 4, 1894, the British Post Office decided it was easier and better to clearly state the numerical hour and minutes within the postmark, and the asterisk time codes gradually faded out of use.

During wartime, mail is frequently scrutinized by censors who look for content that could be beneficial to the enemy should letters fall into the wrong hands. Sometimes censors have cut out phrases or entire paragraphs of information within a letter, or used heavy black ink to obliterate the offending lines.

In World War II, Great Britain was suffering tremendous military and civilian losses, and went to great lengths to try to protect its nation and citizens.

The cover shown here with censor tape from "Examiner 2821" was sent to New York from somewhere in Great Britain during WWII. The postmark was obliterated by the censor using black ink in an effort to keep the point of origin secret.

Although this gesture might seem peculiar to us now, it was considered routine at the time. The practice was intended to prevent an enemy from tracing an intercepted missive back to a specific place in Great Britain.

Secret messages could be delivered in ordinary mail by using one of the age-old methods of invisible writing, which could be applied to the backs of stamps, the interior of an envelope or within the content of an unremarkable-looking letter.

Invisible ink was easily made from milk, starch, citrus juices and other common household items.

Censors would flag suspicious mail, and those letters would be sent to a lab where special chemicals and other tests were applied to check for invisible writing.

The fourth illustration shows an envelope and letter written in the Norwegian language, sent from New York to Stockholm in March 1945. The stripes of color visible on the letter and the envelope are the result of chemicals used to test for the presence of invisible writing.

Other mysterious elements in our hobby include secret marks on United States stamps produced by banknote companies, secret postmarks, secret drop box addresses for clandestine operations such as the Manhattan Project, and even hidden images within the design of some stamps.

A closer look at your stamps and covers may reveal secrets lurking within your collection.