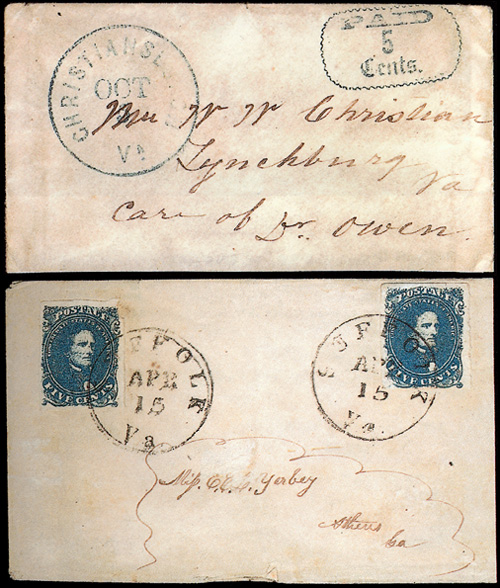 Two covers from the Confederate States of America, one franked with a provisional "PAID" marking (top) and the other with two 5¢ blue Jefferson Davis postage stamps. 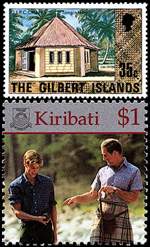 A before-and-after glimpse of the stamps of Kiribati: the stamp at top was issued when the country's name was the Gilbert Islands. The name was changed in 1979. 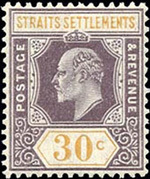 The 30¢ King Edward VII definitive of 1909 from Straits Settlements, Scott 120. The final stamps from the former British colony were issued in 1948.
Previous
Next

What is a dead country? Any area that has ceased existence and no longer produces postage stamps is looked upon by collectors as a dead country. One example of the hundreds of dead countries is Straits Settlements. A former British colony, the Straits Settlements were actually a number of smaller widely scattered areas on the west side of the Malay Peninsula, including Singapore, Panang, and a place with the unusual name of Dindings.There are literally hundreds of interesting geographic areas that stamp collectors refer to as dead countries. While the name may imply a collecting area that isn't active, the truth of the matter is that dead countries are often rich with possibilities. They can provide some very satisfying stamp collecting opportunities.

The first Straits Settlements stamps in 1867 were surcharged stamps of India: that is, Indian stamps were overprinted with new values, and in this case, the image of a crown. Later stamps were produced with the printed name of the colony, as on the 1909 30¢ issue shown in Figure 1, Scott 120. Straits Settlements actually lasted a long time, but it began to dissolve as the world's boundaries changed following the end of World War II.

Singapore became a separate colony in 1946. It produced its own stamps in 1948 and continues to do so today. The remaining areas joined the Federation of Malaya, which itself became part of Malaysia in 1963.

Singapore, Panang, Dindings and the other areas live on, therefore, as independent entities, or regions or cities of other countries. Now they simply use stamps with other inscriptions.

The Straits Settlements are dead, you might say, but interest in collecting them certainly isn't. Linn's online marketplace zillionsofstamps.com currently presents more than 900 listings of Straits Settlements stamps, including the unused stamp shown in Figure 1. The prices range from a dollar or less for many stamps more than 100 years old, to hundreds of dollars for scarcer single stamps and sets.

One great appeal of a dead country is that there is no racing to keep up with new stamp issues. The stamps of dead countries generally have clear-cut starting and ending points, determined not by a collector's whim, but by the events of history that launched the stamp collecting entity and eventually brought about its demise.

Collecting a dead country usually means you won't have to face an onslaught of new stamps, but that's not always the case. Sometimes dead countries are resurrected.

As an example, the Baltic countries swallowed up by the Soviet Union in 1940 — Estonia, Latvia and Lithuania — all began issuing stamps again 50 years later, after declaring their independence in 1990 as the Soviet Union was breaking apart. Collectors can choose to save the stamps of these nations from before they lost their independence, after they regained it, or both.

Every dead country has an interesting story to tell, from the way it began to the way it all ended. The reforms in Eastern Europe in the late 1980s resulted in a few newly dead countries: East Germany and Berlin, both now using the stamps of Germany; and Czechoslovakia, which separated into two nations, the Czech Republic and Slovakia.

Even though the configuration of the Czech Republic is much different than it once was, its stamps continue to be listed under the heading Czechoslovakia in the ScottStandard Postage Stamp Catalogue. But the stamps now read "Ceska Republika" instead of "Ceskoslovensko." Slovakia ("Slovensko"), considered a dead country since 1945, resumed its stamp-issuing status in 1993.

Other European dead countries have remained so for more than a century and undoubtedly they always will. The Scott catalog lists Hamburg, Hanover and several other regions under the heading German States. Many of these areas never issued stamps after the 1860s, when they became part of Germany or Prussia.

There are times when the name of a country will undergo a permanent and significant change, usually under historic circumstances, such as the installation of new government or a declaration of independence.

Usually the new country is separately listed in the stamp catalogs. That's what happened in 1979 when the British protectorate of the Gilbert Islands northeast of Australia became the independent republic of Kiribati (pronounced "KYR-ih-bahs").

Figure 2 shows a 1976 stamp from before the change and a new stamp issued July 24, 2000. Obviously, the new Kiribati stamp, with its image of Britain's Prince Charles and his son Prince William recalls the little island nation's ties with Great Britain.

All kinds of changes have ended stamp-issuing status for many different entities. The listings that follow India in the Scott catalog include a remarkable collection of Convention States of the British Empire and Native Feudatory States, including Faridkot, Jind, Rajpeepla and Poonch.

Stamps from some of these states became obsolete in the 1800s, though others were still issuing stamps into the 1940s. In most cases, the stamps of these various areas were eventually replaced by the stamps of India.

During the 1960s the white rulers of the apartheid South Africa government established what they called bantustans or autonomous homelands for native peoples in various parts of the country.

The South African government declared political independence for these four enclaves — Bophuthatswana, Ciskei, Transkei and Venda — but that declaration was never recognized by any other country. At the same time, South Africa began issuing stamps inscribed with the names of these areas. One stamp from each is shown in Figure 3.

These stamps were not officially recognized by most postal authorities but were generally tolerated on mail. They appear in stamp catalogs with the stamps of South Africa. Political changes in South Africa that led to the end of the apartheid government also resulted in the end of the bantustan system, and stamps for all four areas ceased appearing in 1994.

Even collectors of United States stamps can claim a dead country in the midst of the very active U.S. stamp-issuing history. Can you figure out what it is?

When southern states seceded from the Union in the 1860s, they needed to find forms of postage other than the United States stamps that had been in use for the previous 15 years. Figure 4 shows two covers from this period, part of the Howard P. Green collection of Confederate States covers auctioned April 12, 2000, by Robert A. Siegel Auction Galleries.

At the top is an 1861 provisional postage handstamp from Christiansburg, Va. on a letter addressed to Lynchburg, Va., Below it is a cover bearing two of the 5¢ blue Jefferson Davis stamps from the Confederate States of America, postmarked Suffolk, Va., on a cover to Athens, Ga.

Entire covers such as these are a treat for collectors, for they show precisely how these long-gone entities used the stamps and markings that moved the mails along.

The Confederate States of America may no longer be issuing stamps and provisionals, but there are hundreds of collectors who find this collecting field more exciting and alive than any other around.

You can learn more by contacting the Confederate Stamp Alliance, an affiliate collector's group of the American Philatelic Society. Visit the CSA web site at www.csalliance.org for information, or send an addressed stamped envelope to Ronald V. Teffs, 19450 Yuma St., Castro Valley, CA 94546.

A complete list of dead countries that have issued stamps can be found in Linn's World Stamp Almanac,Millennium edition, an indispensable reference for stamp collectors. The Almanac also includes 120 pages of listings for stamp-issuing entities, both active and inactive, with a capsule history and information about when stamps were issued. Ordering information for Linn's World Stamp Almanac can be found here.