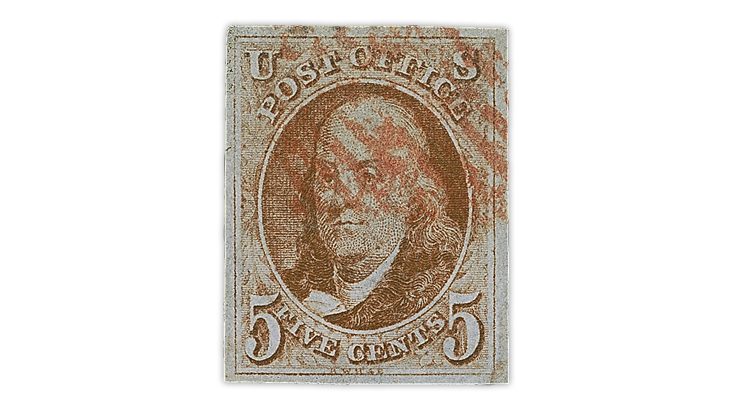 This United States 1847 5¢ Benjamin Franklin printed in the scarce red orange shade is one of more than 1,200 stamps in the David W. Gorham collection of outstanding used U.S. stamps to be sold May 17-20 by Robert A. Siegel Auction Galleries in New York C

Collectors seeking used United States stamps in exceptional condition will have numerous opportunities to fill holes in their albums when Robert A. Siegel Auction Galleries offers the David W. Gorham collection May 17-20 in New York City.

A total of 1,218 lots will be up for bids. Of these, 197 come with graded certificates issued by the Philatelic Foundation or Professional Stamp Experts, according to Siegel. All significant stamp issues of the 19th and early 20th centuries are well represented.

Charles Shreve, director of Siegel International, prepares collectors for what is in store in the introduction to the 312-page catalog for the collection that Gorham painstakingly and methodically assembled over many years. He displayed a keen eye for “stamps that have extraordinary color, cancellations and rare features that go beyond a numerical grade,” Shreve said.

“Just the 1847 Issue stamps alone would rank among the most exciting sales ever held by the Siegel firm,” Trepel said.

“Combined with the extensive showing of classics, inverts, fancy cancellations, multiples and back-of-book rarities, this collection is destined to take its place among the greatest ever formed.”

Numerous choice 1847 5¢ Benjamin Franklin stamps will cross the auction block during the first session on May 17. Among the scarcer offerings is a 5¢ Franklin in the scarce red orange shade (Scott 1c).

Siegel describes the stamp, which has an unobtrusive red grid cancel, as “one of the finest extant.”

Accompanying the stamp is a 1999 expertizing certificate from the Philatelic Foundation.

Siegel lists this 1847 5¢ red orange Franklin at $8,500, the value for a used example of Scott 1c in the Scott Specialized Catalogue of United States Stamps and Covers.

A cautionary note in the Scott U.S. Specialized catalog states: “While it was legal to use Nos. 102-111 as postage, their actual use is generally rare and is mostly confined to dealers using them on registered mail. Examination by recognized expert authorities is recommended.”

“The 10c has the lowest survival rate (after the 90c) of any of the Re-Issues, which is surprising, because after June 1, 1867, the registry fee could be paid by stamps, and the 10c fee was in effect when the 10c 1861 Re-Issue was in circulation,” Siegel said in its description of the stamp in the auction catalog.

Siegel’s census of Scott 106 records just five used examples, of which three are sound and two have minor faults. The stamp in the Siegel sale is considered one of the two finest; the other is the stamp that once resided in the Zoellner and Natalie Grace collections.

Full details of the auction of the Gorham collection of outstanding used U.S. stamps, including a downloadable version of the catalog and online bidding options, are available on the Siegel website.