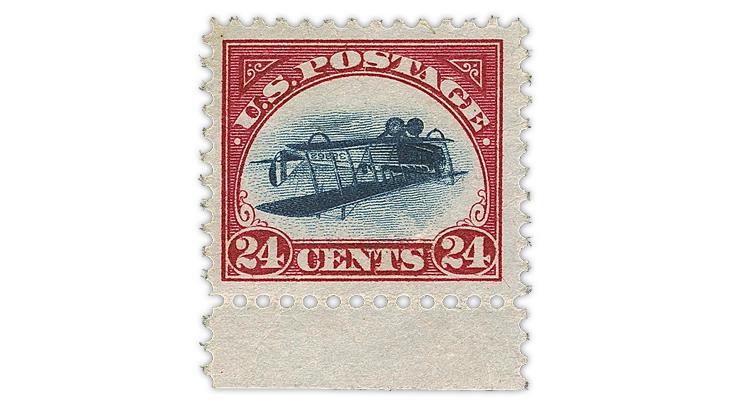 The United States 1918 Jenny Invert from position 94 in the discovery pane of 100 will cross the auction block during Robert A. Siegel Auction Galleries’ June 28 Rarities of the World sale. The stamp has bottom sheet selvage and original gum that was prev 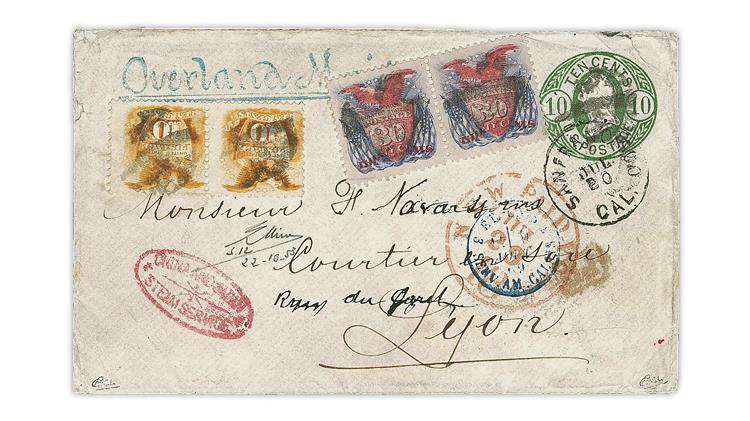 The famed Miro cover, the earliest documented use of the U.S. 1869 Pictorial issue from China or Japan, will be up for bids during the June 29 Siegel auction of part 3 of the Magnolia collection of U.S. mail in China and Japan. Siegel estimates the Miro c
Previous
Next

Robert A. Siegel Auction Galleries in New York City will conduct its annual Rarities of the World sale June 28, followed the next day, June 29, by part 3 of the Magnolia collection of United States mail in China and Japan.

Collectors intent on adding an iconic invert error to their collection will have a golden opportunity during the rarities auction.

The stamp is the famous 1918 24¢ carmine rose and blue airmail error showing the blue Curtiss Jenny biplane upside down within the carmine rose frame (Scott C3a).

Known to collectors far and wide as the Jenny Invert, the unused lightly hinged example in the rarities sale is from position 94 in the discovery pane of 100 purchased by William T. Robey May 14, 1918, at the window of the New York Avenue post office in Washington, D.C.

The well-centered stamp has bottom sheet selvage, original gum and a “94” position number written on the back by Philadelphia stamp dealer Eugene Klein, who purchased the pane from Robey for $15,000.

According to Siegel, the stamp has a tiny surface disturbance in the paper above the ‘S’ of ‘Cents’,” along with a “small indentation on the back at the top of the penciled ‘9’ of the ‘94’ position number.”

Siegel lists the position 94 Jenny Invert at the Scott Specialized Catalogue of United States Stamps and Covers value of $450,000, which is for a sound unused example in the grade of very fine.

Siegel’s first record for the position 94 Jenny Invert is the 1960 auction of the T. Charlton Henry collection by Harmer, Rooke & Co. Erwin Griswold, who served in the Johnson and Nixon administrations as solicitor general of the United States, acquired the stamp in the Harmer, Rooke sale.

The most recent owner was Melvin Getlan. Siegel sold the first part of Getlan’s extensive collection of U.S. machine perforations in a sale held April 5.

A wealth of additional information about the Jenny Invert is available on Siegel’s Inverted Jenny website.

Part 3 of the magnificent Magnolia collection of U.S. mail in China and Japan, consisting of 278 lots, will be offered in two sessions June 29.

Before digging into this philatelic feast, it’s essential to understand the history and importance of what is on the menu.

Potential bidders should take the time to read the catalog introduction, which provides a compact review of the history of the three periods (pre-treaty, interim consulate and post office) that encompass early mail communication between the United States and China and Japan.

Also included are summaries of historical developments in China and Japan that ultimately precipitated the various postal treaties and associated agreements that made the covers in the Magnolia collection possible.

“As will be evident from this catalogue, researching and writing descriptions that accurately convey the significance and rarity of the material takes considerable time and attention to detail,” Siegel said.

The eye-catching 90¢ franking is anchored by an 1861 10¢ yellow green Washington stamped envelope (Scott U40) in combination with pairs of the 1869 10¢ and 30¢ Pictorial stamps (115 and 121, respectively). All four stamps and the 10¢ indicium are canceled by five strikes of a large “X” killer from Yokohama, Japan, where the cover originated before taking its lengthy two-ocean transcontinental journey to Lyon, France.

In fact, the cover’s striking appearance landed it on the cover of the Siegel catalog for the Magnolia sale.

“The Miro cover is desirable for a number of reasons, not least of which is the pair of 30¢ 1869s,” Laurence wrote. “Around 60 30¢ 1869 covers have been documented. Only eight show pairs, none nicer than this one.”

Despite its storied pedigree, the Miro cover was “initially greeted with contempt and derision,” according to Laurence.

“Its importance in worldwide philately was undermined for years by the specter of doubt raised by Stanley B. Ashbrook [in 1953], who grossly misinterpreted the postage rates between Japan and France via the United States,” Siegel said.

“In 2002, with a simple but compelling analysis of the markings and rates, and using new knowledge about the availability of the 1869 Pictorial stamps in Japan, Steven Walske secured a certificate of genuineness from The Philatelic Foundation.”

This 2002 certificate accompanies the Miro cover.

The 2002 Philatelic Foundation certificate was issued 49 years after Ashbrook condemned the Miro cover “without ever having examined it personally,” Laurence wrote.

“The prejudice launched by his hasty and ill-considered fulminations had taken half a century to overcome.”

Separate softcover catalogs have been prepared for the Rarities of the World sale and part 3 of the Magnolia collection. Full details of the auctions, including downloadable versions of the catalogs and online bidding options, are available from Siegel.