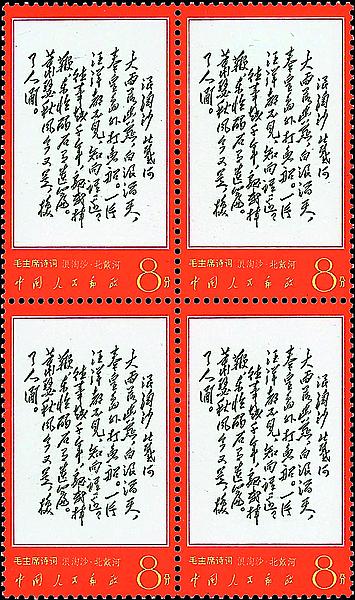 A complete mint set of the 1967-68 People’s Republic of China Poems of Chairman Mao stamps in blocks of four will be offered during the Kelleher & Rogers sale. 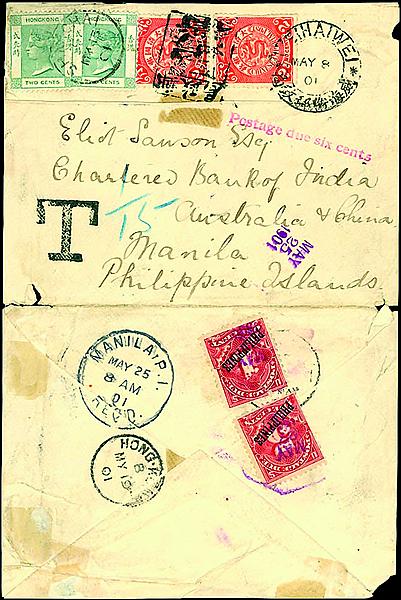 Mailed from Wei Hai Wei, China, to Manila, Philippines, in 1901, this cover includes stamps of China and Hong Kong, Philippines postage due stamps, and a rare square-corner Post Office Wei Hai Wei type II tombstone cancel. It will be offered by Kelleher & Rogers Fine Asian Auctions in the Jan. 9-11 auction in Hong Kong.

One very attractive cover in this sale is described by Kelleher & Rogers as a “tremendous new discovery and unrecorded usage.”

The 1901 triple-franking postage due cover (opened for display) was mailed from Wei Hai Wei in Northeast China to Manila, Philippines, using two of the 2¢ scarlet Coiling Dragon stamps of the Chinese Imperial Post.

These stamps are postmarked with the Wei Hai Wei double-ring cancel dated May 8, 1901, as well as the square-corner “Post Office Wei Hai Wei” type II tombstone cachet, a usage that Kelleher & Rogers notes is believed to be only the second recorded example of this marking.

Two Hong Kong 2¢ Queen Victoria stamps were added and postmarked in Shanghai, and the cover was marked postage due with a bold “T” handstamp, a manuscript “T5” in blue, and a violet “Postage due six cents” handstamp. Upon arrival in Manila, Philippines 1¢ and 5¢ postage dues (the U.S. overprinted stamps) were added. These are tied by a violet May 27 cancel, and the 1¢ stamp is described as “with tears during use.”

The reverse of the cover also shows a May 19 Hong Kong transit marking and a May 25 Manila arrival postmark.

Keep in mind that exchange rates fluctuate daily and could be lower or higher at the time of the sale.

The auction also offers a broad selection of stamps from the People’s Republic of China, including a complete mint set of the 1967-68 Poems of Chairman Mao stamps (Scott 967-980) in blocks of four with original gum, never hinged. This appealing set carries an estimate of HK$100,000 to HK$120,000 and an opening bid of HK$50,000.

The auction lots can be viewed and bids can be placed on the Kelleher & Rogers website at www.kelleherasia.com.