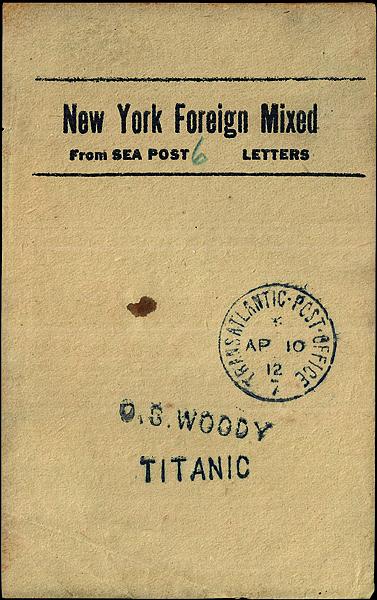 One of an estimated 23 known mail facing slips from the RMS Titanic is set to be auctioned Feb. 28 in London by Argyll Etkin Limited.

The story of the Titanic is well known. On its maiden voyage, the ship departed Southampton, England, destined for New York City. Late at night on April 14, 1912, the ship struck an iceberg and sank in the early morning hours on April 15. The disaster resulted in the deaths of 1,517 of the 2,228 passengers on board.

The mail facing slips used by the three American postal clerks on board the Titanic were placed on mail bundles to indicate their routing.

The mail slip to be auctioned was recovered from the shirt pocket from the body of American mail clerk Oscar Scott Woody.

The slip is marked with the handstamp “O.S. Woody,” a handstamp reading “Titanic,” and a ship postmark for the Titanic dated April 10, 1912. It also carries a header for “New York Foreign Mixed” mail and has a manuscript “6.”

The facing slips were prepared by Woody on April 10 upon the ship’s departure from Southampton.

According to a March 2012 article by Kendall C. Sanford on the subject of Titanic mail facing slips, published on the website www.titaniccovers.com, approximately 23 different facing labels are known from the Titanic.

Among the other Titanic ephemera items in the auction are original 1912 photographs of the ship and ship’s deck, a paper napkin souvenir in memory of those who lost their lives, and a 1917 check given to the Titanic Relief Fund.

For more information about the Titanic mail slip and other items in the Feb. 28 auction, visit the Argyll Etkin Limited website at www.argyll-etkin.com; write to 17 Waterloo Place, London SW1Y 4AR Great Britain; or e-mail philatelists@argyll-etkin.com.

Items from the Feb. 28 auction will be on display at the firm’s office and during the Feb. 19-22 Stampex show in London.