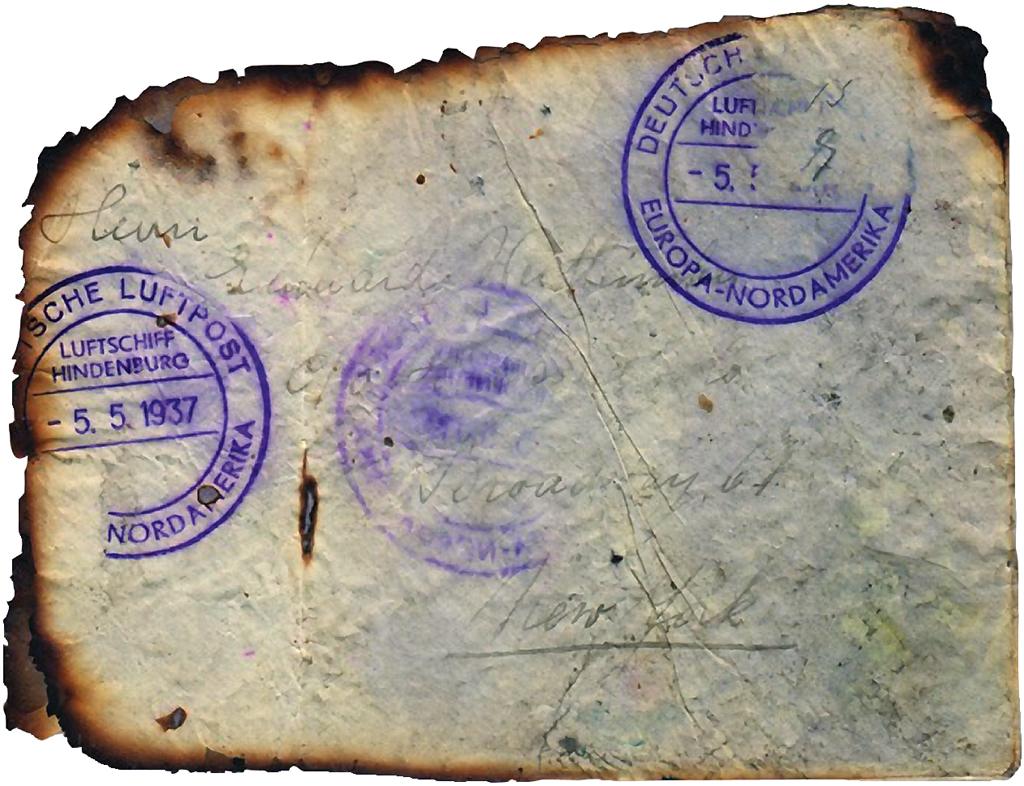 The Daniel F. Kelleher firm of Danbury, Conn., will present a series of auction in early May. A cover from the 1937 Hindenburg airship crash is among the items being offered.

A burned cover from the 1937 crash of the German airship Hindenburg is among the items offered in an upcoming auction by Daniel F. Kelleher Auctions.

The auction titled “‘Fire & Ice’ Zeppelins, Aerophilately and Titanic” will take place May 6 at the firm’s Danbury, Conn., offices. It is one of a series of auctions held by the firm May 5-7.

The crash cover is addressed to a New York City business and is housed in a cellophane wrapper with a Post Office Department seal on the back. It is lacking adhesives but has clearly visible on-board cancels.

The auction description notes that in Dieter Leder’s book LZ-129 Hindenburg Zeppelin Crash Mail, this cover is identified as corresponding to the fourth (post-crash) finding. It is also called “an item of special interest since it was not handled like the other mail dispatched on the flight from Frankfurt to Lakehurst with a New York or United States address. Usually such type of mail should have been prepared by the postmaster on board the airship to be offloaded at Lakehurst, and such items have been recovered after the crash. However this cover was treated differently: Instead of being prepared for offloading, it ended up on the pile of articles to remain onboard for dispatch on the return flight.”

The sale includes a large number of zeppelin and flight covers, with additional Hindenburg and other airship collateral material, plus a broad range of Hindenburg crash items such as fabric and wreckage pieces, letters, photos and more.

The Kelleher auctions taking place during the first week of May are each being presented in their own catalogs.

The offerings include United States revenue stamps from the LeBow and Glendale revenue collections, plus the “Dr.” collection of foldovers on May 5.

The remarkable Ryukyus collection formed by George W. MacLellan Jr. is also being offered May 5.

On May 6 the focus is on Prince Edward Island, Canada and British North America with the Majestic collection.

The Flagship series auction will take place May 7, with United States, British and worldwide stamps and postal history.

For additional information about all Kelleher auctions, visit the Kelleher's website www.kelleherauctions.com.

The sales are taking place at the Kelleher offices, 4 Finance Drive, Danbury, CT 06810.