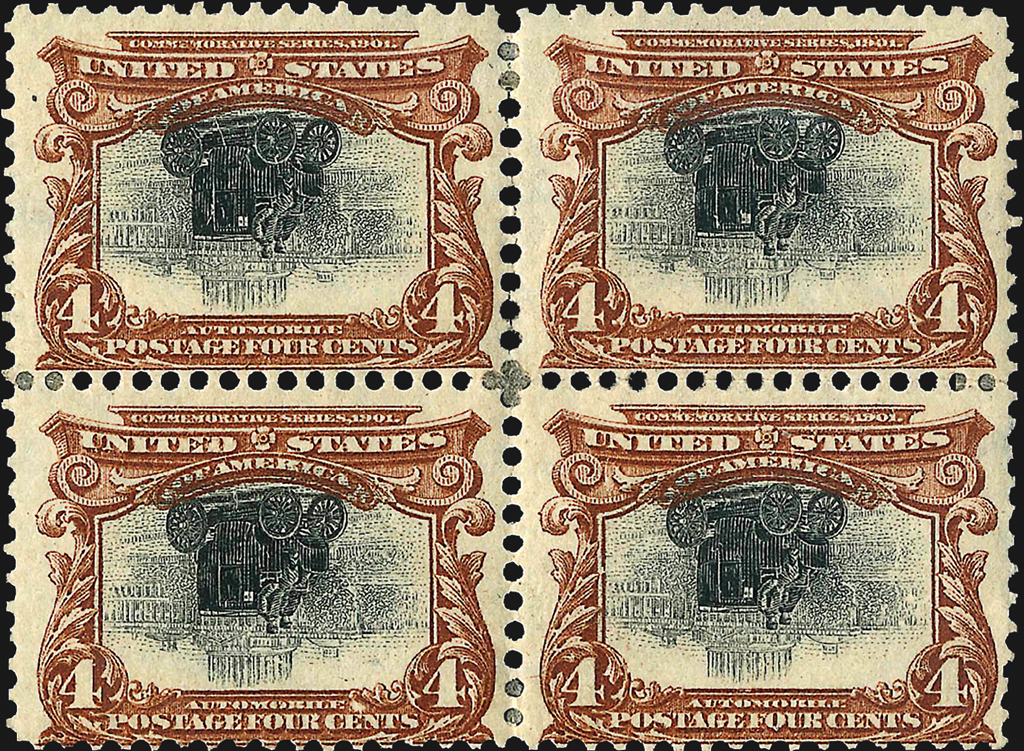 A block of four 1901 4¢ Electric Automobile in Washington stamps with center inverted from the Pan-American Exposition set will be offered during the auction of the Hall collection. 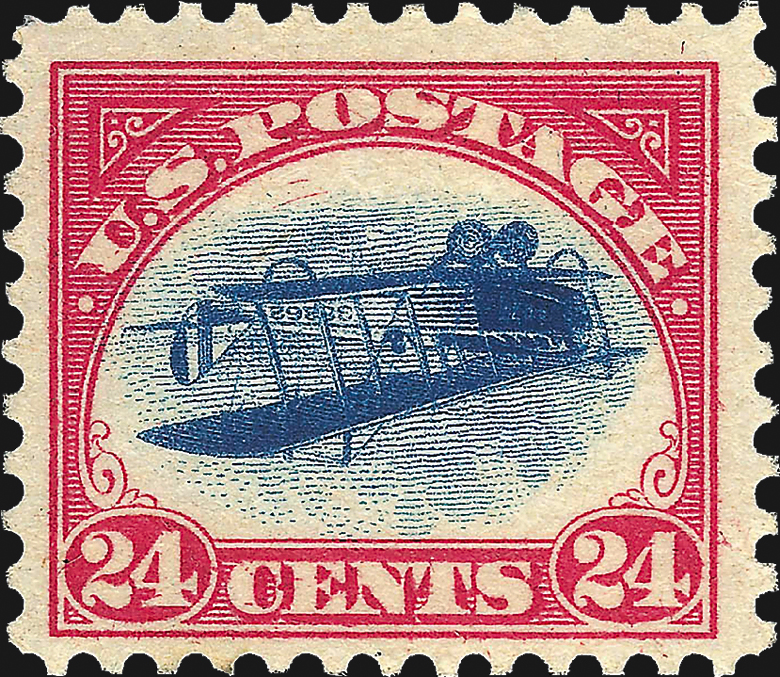 One of the better-centered U.S. 1918 24¢ Inverted Jenny airmail error stamps, this position 69 example from the Hall collection is described as “very fine and choice.” 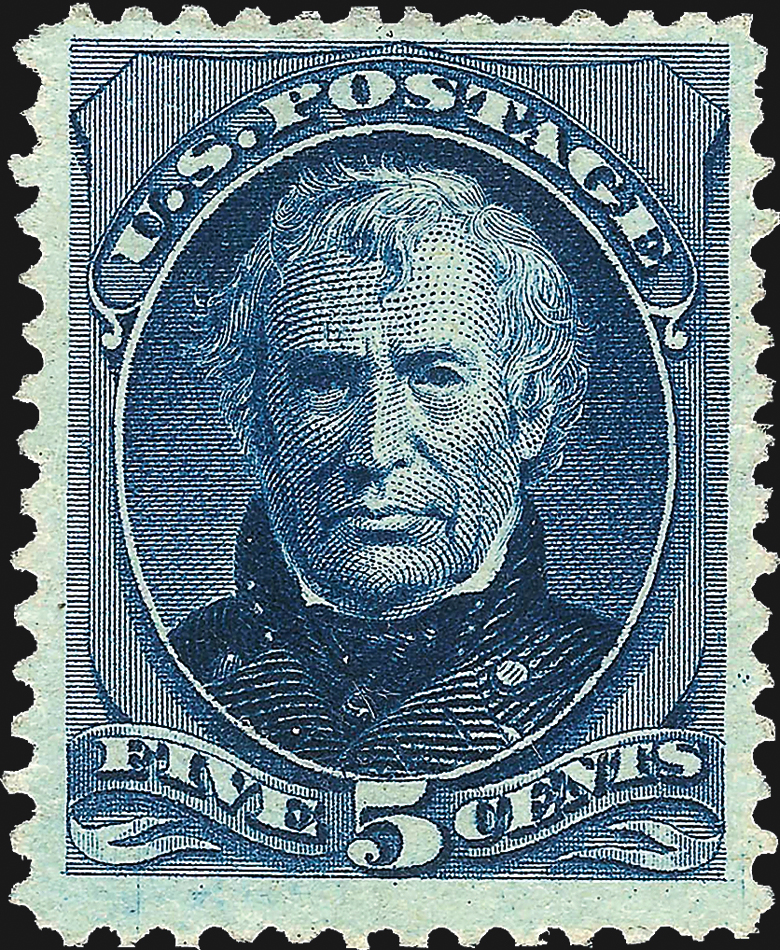 A beautifully centered 1880 5¢ Zachary Taylor special printing, one of just 18 surviving examples, will be offered by Robert A. Siegel Auction Galleries during the April 28-30 sale of the Robert Hall collection of United States stamps. The collection was housed in 20 albums.

In what promises to be a stamp auction comparable to past famous-name sales, Robert A. Siegel Auction Galleries is offering the Robert R. Hall collection of United States stamps April 28-30 in New York.

Though perhaps lacking a few of the greatest rarities, the Hall collection is similar in caliber to that of Alan Whitman, sold in 2009, according to Siegel’s president, Scott R. Trepel.

Hall, who passed away in 2011, never exhibited his stamps, although the impressive sale catalog — a tome running to 370 pages — is testament enough to his achievement. It is available as a free, 43-megabyte download.

Hall’s work was actually three collections in one: mint stamps, used stamps, and blocks and multiples, housed in some 20 albums. The holding is being sold in five sessions over three days, totaling nearly 1,100 lots.

Live online bidding in real time will also be possible at StampAuctionNetwork.com.

Siegel adds a 15 percent buyer’s premium to all lots.

Robert Hall was born in 1926. After his World War II service, he graduated from Kenyon College in Ohio and became a horticulturist, returning to his native California and buying up then-inexpensive land to grow chrysanthemums, carnations and poinsettias.

Over time, as California developed, Hall’s land became worth a fortune. As he neared retirement, he and his sons were able to devote more resources to their shared hobby: building on the stamp collection begun by Hall’s father in the early 20th century.

Although the mint and used stamps and blocks were housed separately in Hall’s collection, the sale intermingles them, grouping stamps by catalog number for the sake of buyers wishing to find things more easily, Trepel said.

Among early U.S. imperforate issues, one highlight is a 5¢ red-brown Jefferson (Scott 12) with large even margins, part original gum and no faults. Described as being generally “the most difficult denomination [of the 1851-56 issue] to obtain with four margins in sound original-gum condition,” it is offered with an estimate, based on its value of $30,000 in the Scott Specialized Catalogue of United States Stamps and Covers.

In many cases throughout the sale, as is standard practice, the Scott catalog value is used as an estimate. For stamps that trade infrequently, factors such as condition and the number of bidders momentarily chasing an item can cause realizations to go substantially above or below those values. That is part of what keeps auctions exciting.

Of the 1857-60 issue, which are essentially the same designs as the previous group but with perforations added, the 5¢ Jefferson in a particular shade known as Indian red (Scott 28A) stands out as an exceptional rarity. Research by Siegel shows just a handful surviving, as this example does, with any amount of original gum, and most of those have sold for six figures in recent years. The estimate is $175,000.

Hall “took an interest in getting things like blocks,” said Trepel in an interview on April 1. He said he felt that some of the blocks and multiples in the sale represent “opportunities.”

Among the so-called first designs and colors of 1861, which were once classified as stamps but are now listed in the Scott catalog as essays or trial color proofs, the 12¢ intense black Washington (formerly Scott 59, now 69-E6e) is known from a mere 16 examples, only half of which retain their gum.  The original-gum single in the Hall sale, which traces its provenance to the illustrious Caspary collection, carries an estimate, despite a faint crease, of $85,000.

Used examples of all three inverted-center errors from the 1869 pictorial series — the 15¢ type II, 24¢ and 30¢ (Scott 119b, 120b, 121b) — appear in the sale. The 30¢ is an exceptionally superb example, being well-centered and sound, one of perhaps three in that condition, according to Siegel.

It has not been professionally graded, but Siegel calls it “at least an XF 90,” which would merit a valuation of $142,500 in the U.S. Specialized by Grade section of the Scott U.S. Specialized catalog.

A handsome block of four of the 1875 re-issue of the 2¢ “Black Jack” Andrew Jackson stamp (Scott 103) is noted as being one of just two blocks known. It carries a $90,000 tag. A foursome of the 4¢ Columbian error of color (Scott 233a), printed in the deep blue of the 1¢ stamp rather than ultramarine, has the same valuation.

An impressive run of special printings of the Banknote issues from 1875-1880 is capped by an 1880 American Bank Note Co. 5¢ Zachary Taylor (Scott 204), beautifully centered and without gum as issued. Of the mere 18 examples to have survived, just a dozen are without faults and only three or four have good centering. The Hall example is one of those. It lists at $290,000.

Collectors of the 1893 Columbian, 1898 Trans-Mississippi and other early commemorative issues will find plenty to salivate over in the Hall sale, including plate blocks of the $1 and $2 Trans-Mississippi (Scott 292-293) estimated at $37,500 and $100,000, respectively.

A vertical pair of the 8¢ Trans-Mississippi, imperforate horizontally (Scott 289a), is estimated at $27,500. It was once part of a strip of four belonging to Ethel McCoy, remembered as the onetime owner of a stolen block of Inverted Jennies.

And speaking of the Inverted Jenny (Scott C3a), there is one of those, too: position 69, one of the better examples from the original sheet of 100 in terms of centering. Siegel describes it as “very fine and choice”, although relative to the generally less-than-stellar centering of most other Inverted Jennies, it might be considered extremely fine by some.

Lightly hinged and still retaining much of its original freshness, this example was last sold in Siegel’s 2000 rarities sale, where it went for $155,000 before the buyer’s premium, which was more than its Scott catalog value at the time. Trepel said he thought a dealer probably bought it on behalf of Hall in that sale.

Twentieth-century issues have a strong showing, especially in coil stamps.

The 1908 4¢ Grant imperforate issue, with privately applied Type III Schermack perforations (Scott 314A), is represented by the only known mint, never-hinged single in existence. One other mint, never-hinged example is part of a pair that appeared in the 2009 Whitman sale. The single in the Hall sale was once part of a strip in the famous Lilly collection, later separated into two pairs and a single. It carries a $200,000 estimate.

A 1908 1¢ Franklin vertical coil, perforated horizontally (Scott 316), was an early government experiment in the new technique of making coils for vending machines, unannounced at the time. Just a dozen pairs are known to survive. It is valued at $240,000.

The scarce 3¢ “Orangeburg” coil (Scott 389), made for use by one mailer in the New York town of that name, is represented by both an unused pair and a used single.

A 10¢ Washington-Franklin coil (Scott 356) strip of three has interesting postmarks from the “Chiyo-Maru” Japanese sea post, having been used to mail a letter aboard a ship leaving San Francisco in 1910. The strip is considered unique.

Back-of-the-book issues include some good-looking early special delivery plate blocks as well as some scarce unused early postage due stamps and a strong run of second issue revenue stamps with inverted centers.

The show-stopper among the blocks is surely a block of four of the 4¢ Electric Automobile in Washington from the 1901 Pan-American Exposition set, with inverted center (Scott 296a). The sale catalog includes an intriguing and well-illustrated four-page history of how the inverts came about and how they reached the public. The block is cataloged at $400,000.

There are items in the Hall sale that will quicken the pulse even of those who don’t have a spare $100,000 or so to drop.

A jumbo-margined, well-centered, neatly canceled example of the 10¢ Columbian (Scott 237) fully merits its description as “phenomenal.”

Unlike many of the other stamps with that well-worn label, most of which carry five- or six-figure estimates, Scott 237 has a modest catalog value, in the grade of very fine, of $9. It will doubtless sell for some phenomenal multiple of that amount.

There are a few oddities scattered throughout the sale, attesting to Trepel’s penchant for scrupulousness in describing stamps.

Trepel said that after his staff had compiled the initial lot descriptions, he spent over a week going through every single item, double-checking its condition and comparing it against the firm’s exhaustive records of past sales. In many cases, he added notes about provenance or even corrected old certificates.

A 3¢ scarlet Washington of the 1861 issue, purported to be Scott 74 and accompanied by a 1970s-era Philatelic Foundation certificate identifying it as such, had its description adjusted to read: “Shaved, perforated and gummed proof created to deceive, apparently it worked.” The estimate is $150 to $200.