A group of gutter blocks from sheets intended to be made into coils also appeared in the Brigham collection’s March sale. The lot realized about $39,000.

The Brigham auction in March also offered a set of three imperforate, unsevered, tete-beche booklet panes, Scott 105c, 1907d and 109b. The latter is shown here. The lot sold for about $43,750. 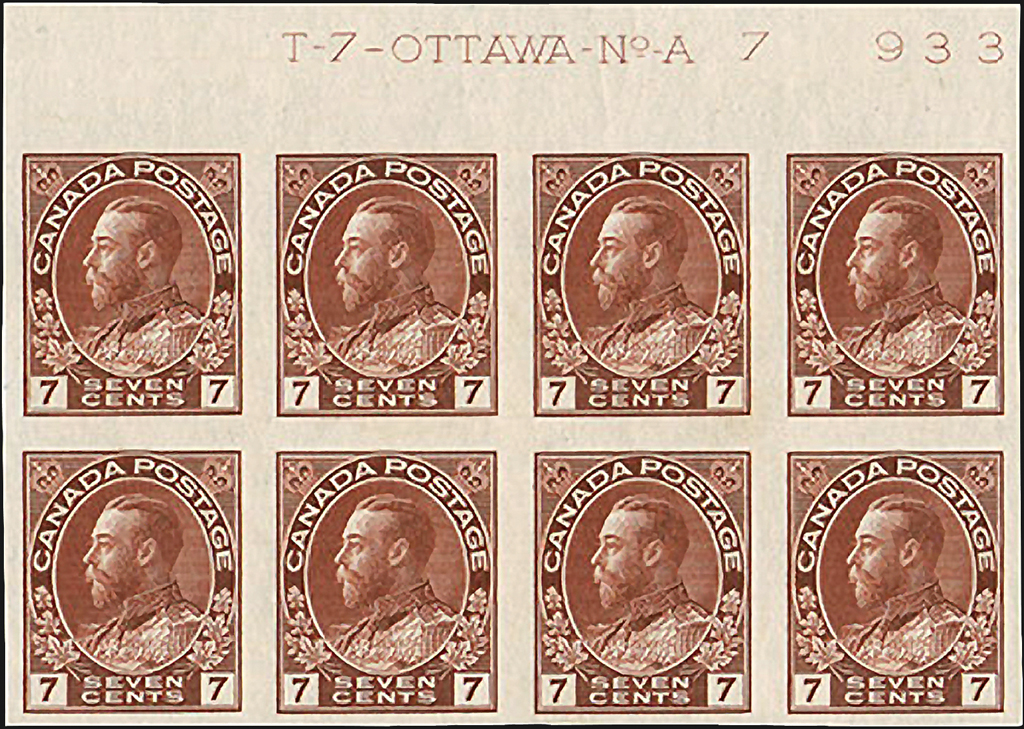 The sale of the Brigham collection of Canada in Toronto in March focused on the Admiral issue. A full set of imperforate blocks of Scott 110a-122a brought about U.S. $120,000. The 7¢ denomination is shown here.

In Toronto on March 6-7, Brigham Auctions continued its multipart sale of the Canada collection belonging to its owner, Ron Brigham.

Earlier portions of the sale covered stamps of the 19th and early 20th centuries, while the latest installment comprised stamps of the King George V "Admiral" issue, the definitive series used from 1911 to 1928 showing the monarch in naval uniform.

Beginning with die proofs and continuing with multiples, plate blocks and varieties, the Admirals collection illustrated one of the main draws of the set for collectors: the great number of printing plates used to produce the stamps.

"The major reason for the multiplicity of plates was the difficulty of finding good steel to prepare the plates as a result of World War I," noted Brigham in the introduction to the sale catalog.

"Because of early wear of the plates, the shortage of paper and its quality during wartime, and the need to replace the German dry inks used in the early printings (1911-1914), the Admiral issue has become the most popular collecting and study area of 20th Century Canadian philately," the catalog continued.

Distinguishing wet and dry printing methods of the Admiral issue further adds to the subject’s complexity.

The top item was a complete set of imperforate top margin imprint blocks of eight, for all the denominations from 4¢ to $1 (Scott 110a-122a).

Lightly hinged only in the top margins, leaving the stamps themselves pristine, the set sold for $149,500 Canadian, or about $120,000 U.S., including the 15 percent buyer's premium that Brigham adds to all lots.

A set of three imperforate, unsevered, tete-beche booklet panes made for a visually striking lot, with the left and right panes head-to-toe in relation to each other.

Equally striking to see was a group of gutter blocks of 12, from sheets intended to be converted to coils of the 1¢, 2¢ and 3¢ stamps, with the unsevered stamps perforated 8 vertically but imperforate between (varieties of Scott 126, 128 and 130). The lot brought about $39,000.

Not every lot was as pricey. A normal imprint block of eight of the 1¢ yellow green, with perforations (Scott 104), inscribed "OTTAWA – No. A152" with all but one stamp never hinged, went for $65.