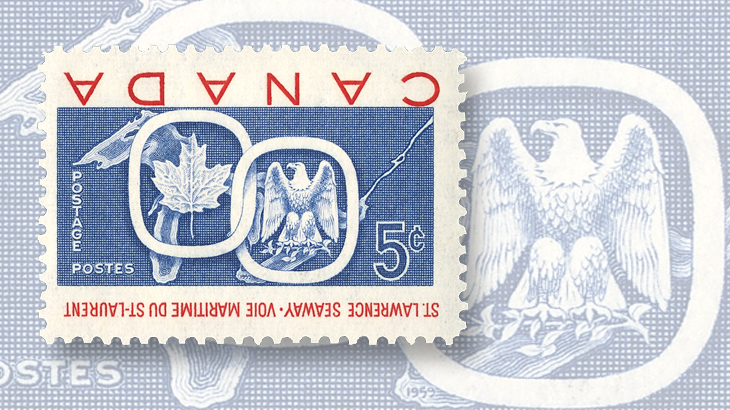 Canada’s famous 1959 5¢ St. Lawrence Seaway commemorative with red inscription inverted. This example and two others will be auctioned Jan. 23 in the next sale of the Brigham collection. 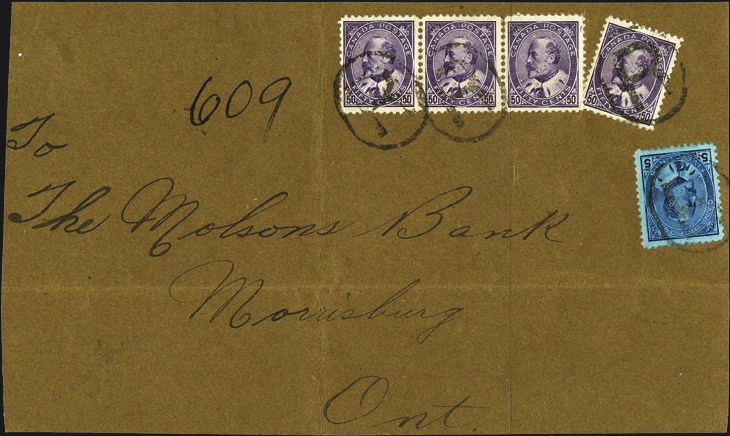 A rare cover franked with examples of Canada’s 1908 50¢ purple King Edward VII stamp; this example, part of a registered money packet, will be offered Jan. 23 by Brigham Auctions. 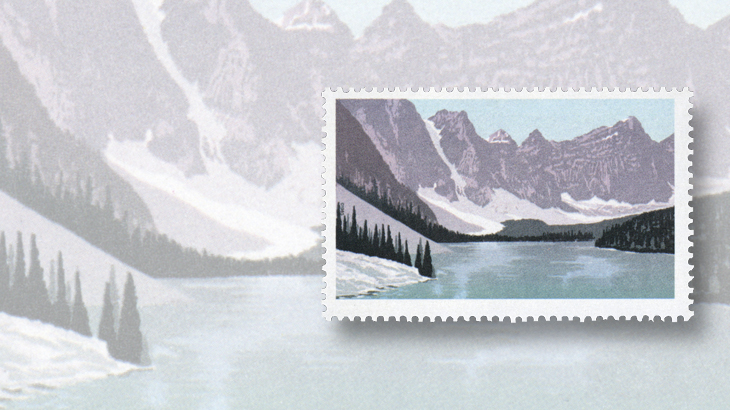 The bluish green inscription-omitted error of Canada’s 1985 $2 Moraine Lake Banff National Park stamp, to be auctioned by Brigham. A block of four of this error also will be offered.
Previous
Next

The next auction of material from the Brigham collection of Canada will take place Jan. 23 outside Toronto at The Brampton Golf Club, 7700 Kennedy Road, in Brampton, Ontario.

Brigham Auctions will offer almost 400 lots of material divided between King Edward VII (with issues from 1903-11) and Queen Elizabeth II (from 1953-95).

As has been the case with most of the previous sessions offering the Brigham material, the Edward VII selections include not only stamps and postal history, but also a considerable number of essays and proofs.

Stamps are represented in just about every possible manner, including imperforates and specimens, plus blocks of four, plate strips and blocks, experimental coils and more.

A rare franking with the 1908 50¢ purple stamp (Scott 95), one of only eight known, according to the auction catalog description, is part of a registered money packet addressed to Molson’s Bank in Morrisburg, Ontario, using the 5¢ blue (91), a single of the 50¢, plus an additional strip of three of the 50¢, all tied by oval “R” cancellations. The stamps pay the parcel post rate for 100 ounces, at 2¢ per ounce, plus a 5¢ registration fee, according to Brigham. The cover is offered with an estimate of $7,500 Canadian (approximately US$5,400).

The Queen Elizabeth II material on offer consists primarily of modern errors and other production varieties, including the well-known 1959 5¢ red and blue St. Lawrence Seaway stamp with inverted red text (Scott 387a), which is represented with three different examples: a single mint never-hinged stamp; a single unused stamp, lightly hinged with attached margin selvage; and a single used stamp with wavy line cancel.

A more recent error, the 1985 $2 Moraine Lake Banff National Park with bluish green inscriptions omitted (Scott 936a), is also offered in three mint never-hinged varieties: a single, another with right margin selvage, and an upper left corner-margin block of four. The Unitrade catalog value for the single stamps is C$1,500 (US$1,080). Unitrade values the block at C$6,500 (US$4,680).

Bids for the Jan. 23 Brigham auction can be placed online through Stamp Auction Network, which has each lot listed and illustrated.