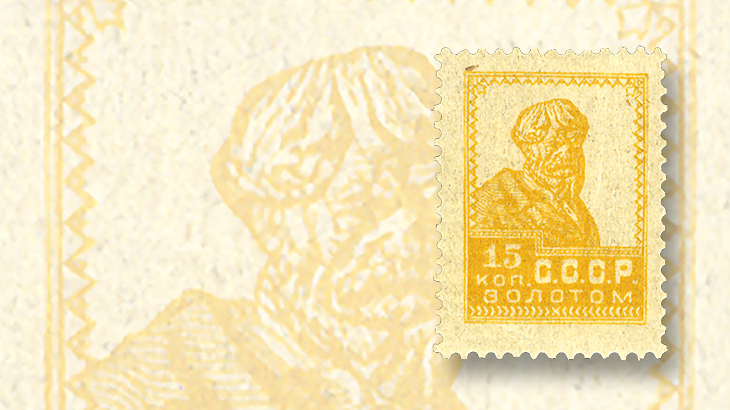 This unused example of Russia’s typographed and perforated 1924 15-kopeck yellow Peasant definitive is offered in the Cherrystone sale. 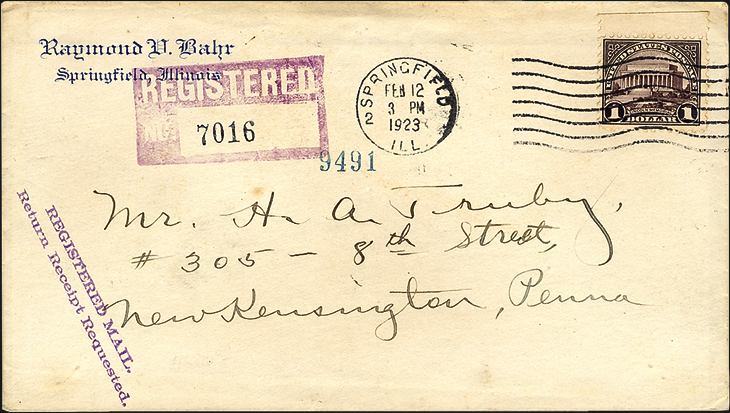 The upcoming Cherrystone auction includes a number of first-day covers from the U.S. Fourth Bureau issue, including this registered FDC of the $1 Lincoln Memorial stamp from Feb. 12, 1923. 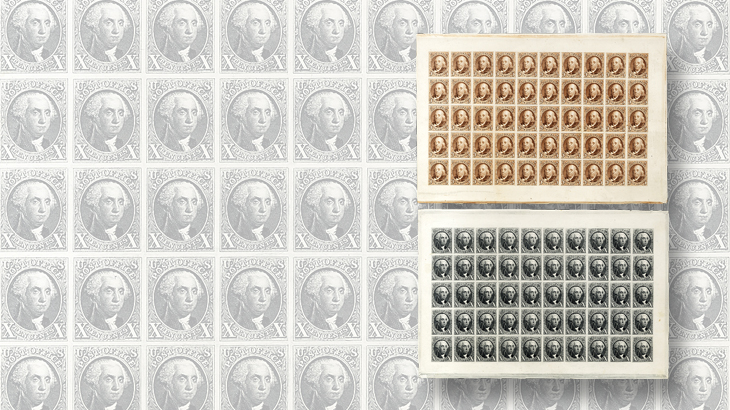 A scarce pair of the United States 5¢ Benjamin Franklin and 10¢ George Washington from the 1875 reproductions in complete plate proof sheets of 50 will be auctioned Jan. 12-13 by Cherrystone Auctioneers. The sale will take place at the firm’s West 57th Street gallery in New York City.
Previous
Next

The sale offers a range of United States and worldwide material comprising 1,483 lots of stamps, covers, collections and more. It opens with classic United States, beginning with unused Providence, R.I., postmaster’s provisionals, the 5¢ (Scott 10X1) followed by the 10¢ (10X2).

This session also includes two plate proof sheets of 50 on card of the 1875 reproductions of the 1847 issue: the 5¢ red brown Benjamin Franklin and the 10¢ black George Washington. Each sheet has large outer margins, and Cherrystone notes that the 5¢ shows plate scratches between positions 31 and 41. The 5¢ also has a minor corner bend, and both have a few “inconsequential” adhesions.

Cherrystone quotes Clarence Brazer (1880-1956), one of the leading researchers in U.S. proofs and essays, as estimating in 1947 that “probably five or six pairs of sheets of 50 plate proofs on cardboard are known.”

The single proofs are listed in the Scott Specialized Catalogue of United States Stamps and Covers as Scott 3P4 (the 5¢) and 4P4 (the 10¢).

The Scott catalog describes these as “official imitations made about 1875 from new dies and plates by order of the Post Office Department.”

The two full panes of 50 are offered by Cherrystone as a single lot with an opening price of $24,000.

There are other proofs and essays offered during this sale, including sets of proofs from the 1869 pictorial issue.

Among the 20th century offerings is a single example of the 1901 1¢ green and black Fast Lake Navigation stamp from the Pan-American Exposition issue with the black steamship vignette inverted (Scott 294a). It is described by Cherrystone as a fine sound example with a 1979 Philatelic Foundation certificate. The Scott value for a very fine unused stamp is $12,500; this example is listed by Cherrystone with an opening price of $5,000.

A number of first-day covers from the U.S. Fourth Bureau issue are offered, including a single franking of the 1923 $1 Lincoln Memorial stamp (Scott 571) on a registered mail cover with return receipt requested.

The cover is addressed to philatelist Harry A. Truby in New Kensington, Pa.; it was mailed from Springfield, Ill., and postmarked there on Feb. 12, 1923, Lincoln’s birthday and the issue date for the $1 stamp.

The envelope shows two registered mail markings on the front and additional departure and arrival postmarks on the reverse. The cover is accompanied by the original registry and signed return receipts, according to the auction catalog description.

The Scott U.S. Specialized catalog assigns a value of $7,500 to an FDC of this issue postmarked in Springfield; this cover is listed by Cherrystone with an opening price of $3,250.

The worldwide material in the Cherrystone auction is particularly strong in British Commonwealth and German area, including Germany World War II occupation issues, plus Italy and colonies, French colonies, Poland and more.

Among the Russia lots is an unused 1924 typographed and perforated 15-kopeck yellow Peasant definitive (Scott 287), a key stamp from the early Soviet era. Cherrystone calls it “a wonderful example of this popular rarity, free of any faults which normally plague this difficult stamp.”

The stamp is lightly hinged and well centered with a couple of natural paper inclusions. It is accompanied by a 1988 Mikulsi certificate stating “very good quality, with full original gum, small traces of the hinge.”

Listed with a $25,000 value in the 2016 Scott Classic Specialized Catalogue of Stamps and Covers, this example is offered by Cherrystone with an opening price of $14,000.