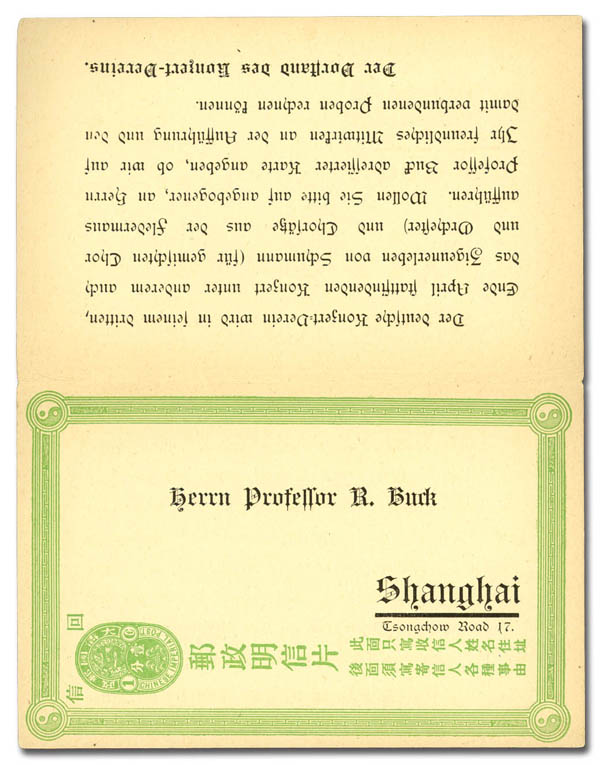 The portion of the reply card to be returned by the recipient was still attached to the other half of the 1911 card in the Kelleher sale, making it a great rarity. 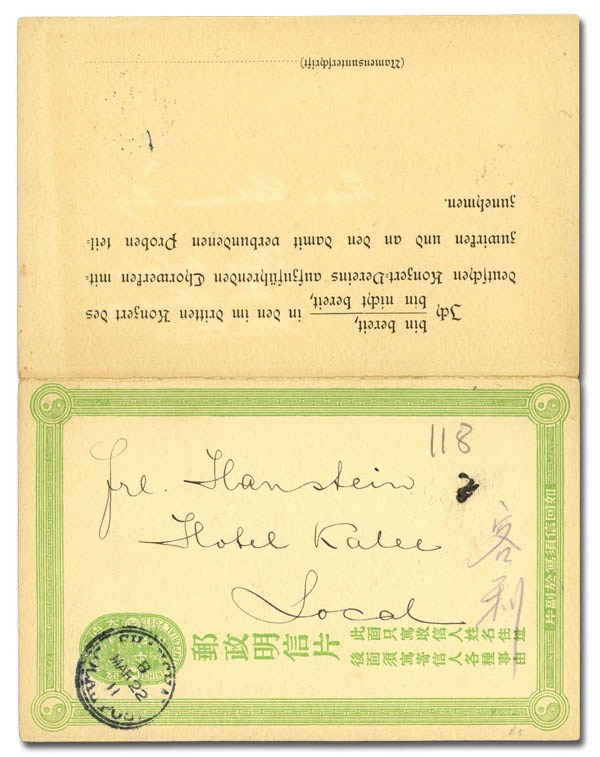 This is the address side of a highly unusual used but intact postal reply card mailed locally in Shanghai in 1911. It fetched $22,200 at the Kelleher & Rogers sale in January. 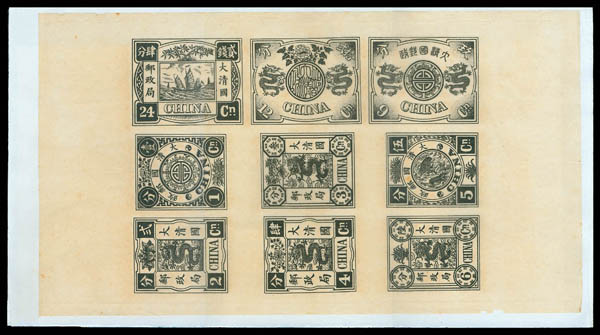 A composite proof of nine 1894 Chinese stamps honoring the dowager empress realized $23,700 in the Kelleher & Rogers auction in Hong Kong in January. 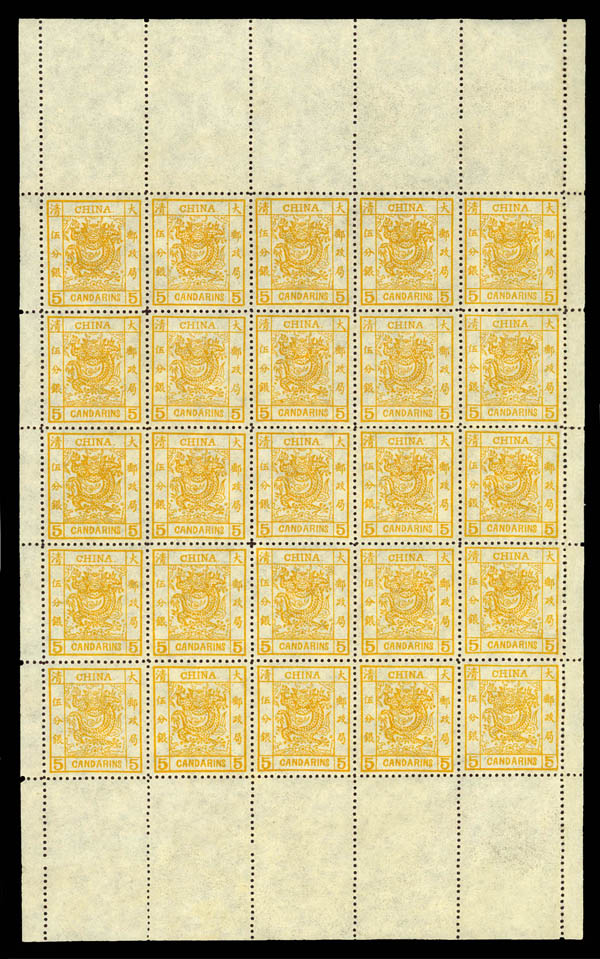 A fine sheet of the 5ca stamp of China’s first issue sold for about $51,800 in the Kelleher-Rogers January auction. 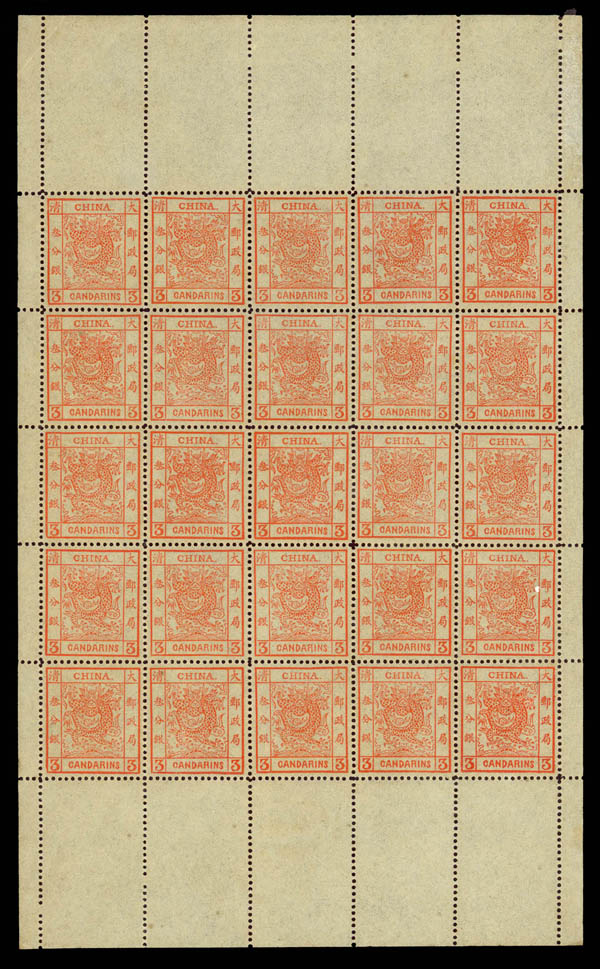 Items from the Lee H. Hill Jr., collection were offered by Kelleher & Rogers in January. This pristine full sheet of the 3-candareen stamp of China's first issue sold for $70,000.

The firm of Kelleher & Rogers held a sale Jan. 9-11 in Hong Kong, of Chinese and Asian stamps and postal history.

Some of the material in the sale was from the collection of Lee H. Hill Jr., widely regarded as one of the foremost authorities on the philately of China.

Hill became friendly after World War II with Ma Ren Chuen, the original author of the popular Ma's Illustrated Catalogue of the Stamps of China. After Ma's death in the 1980s, Hill continued updating and publishing that catalog.

The top item in the sale was a full sheet of the 1878 3-candareen stamp (Scott 2) from China's first issue, printed on thin paper with the stamps set 2½ millimeters to 3¼mm apart. The stamp was reissued in 1882 with the cliches spaced 4½mm apart, and again in 1883, on thicker paper, with the original spacing.

With original never-hinged gum, the sheet of 25 in the Kelleher & Rogers sale was described as being "as fine an example of an 1878 3ca sheet as can be found." It was hammered down for 475,000 Hong Kong dollars, or just over $70,000 in U.S. dollars, with the 15 percent buyer's commission that Kelleher & Rogers adds to most lots. A similarly pristine full sheet of the 5ca stamp of the same issue (Scott 3) was only slightly diminished by having had its right margin expertly reattached. It sold for about $51,800.

The Chinese Customs Post released a set of nine stamps (Scott 16-24) in 1894 honoring the 60th birthday of T'zse Hsi, the dowager empress. R.A. deVillard, a French member of the Customs staff, designed the set and reportedly made 10 composite proofs in black of the nine designs. On six of these proofs, the designs are crossed through with black lines, while on the other four, the designs are not crossed.

The Kelleher sale featured one of the four uncrossed proof sheets, printed on very thin paper and imperforate. It sold for $23,700.

A postal reply card, with preprinted text in German, offered an interesting glimpse into the expatriate lifestyle in Imperial China.

Postal reply cards were first introduced in Germany in the 1870s and allowed the sender of a postcard to prepay a reply, using two postcards attached together as one. The recipient would separate the two cards and mail back the reply half.

Intact reply cards are usually found unused; for a used card to survive intact, its recipient would have had to either neglect the reply or, more rarely, send the attached pair back.

The Chinese Imperial Post began issuing postal cards in 1907, and many of the early users were Europeans living in China. A scarce variety of green 1¢ reply card, with vertical design and folded at right, is listed by the China Stamp Society as PCDRC2A and as 5a in Han's illustrated Catalogue of Imperial & Republic of China Postal Stationery.

Addressed locally in Shanghai in 1911, the card bears a preprinted invitation to a concert of choral and orchestral music put on by the German Concert Society, whose program featured, among other items, the Romantic composer Robert Schumann's Zigeunerleben.

According to the description in the auction catalog, the item represents a uniquely late usage of this type of card. Most of the others were used in 1908 as invitations to a masquerade ball.

Happily for philately, the card's recipient, one Fraulein Hanstein at the Hotel Kalee in Shanghai, didn’t respond to the invitation; history does not record whether she attended anyway. Described as "a great rarity and major exhibition piece," the card sold for $22,200.