Siegel to offer Frajola collection of classics on cover 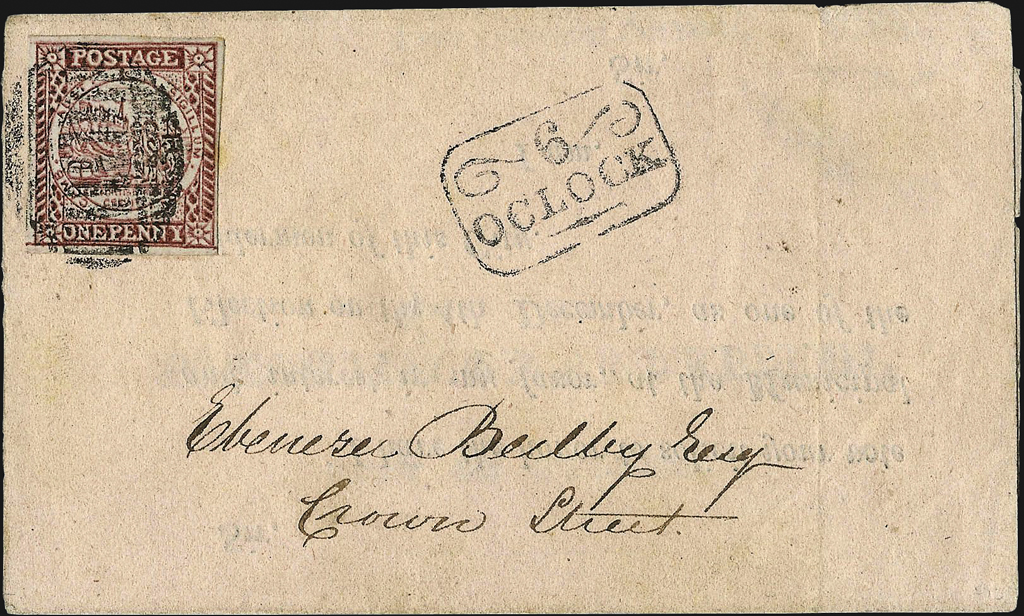 A New South Wales 1-penny “Sydney View” stamp of 1850, in a plate variety with no clouds in the design (Scott 2ck), on a pink printed circular locally addressed with a fancy boxed “6 O’Clock” delivery handstamp in the middle. The cover is estimated to bring $7,500-$10,000. 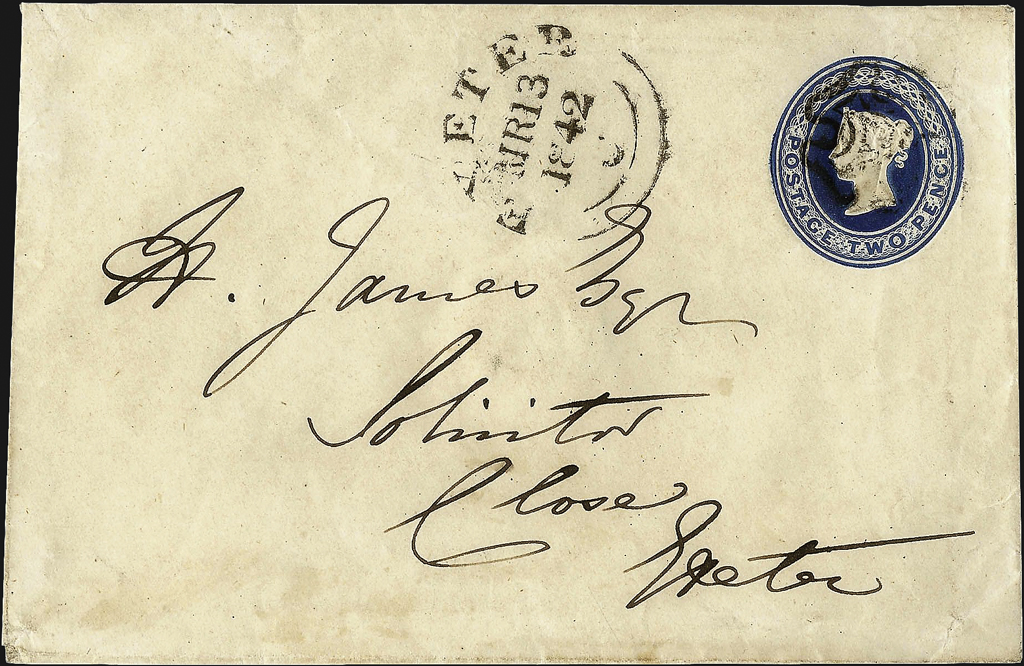 A scarce 2-penny blue embossed envelope of 1841, canceled with a black Maltese cross and circular datestamp of Exeter, England, is estimated at $1,000-$1,500. 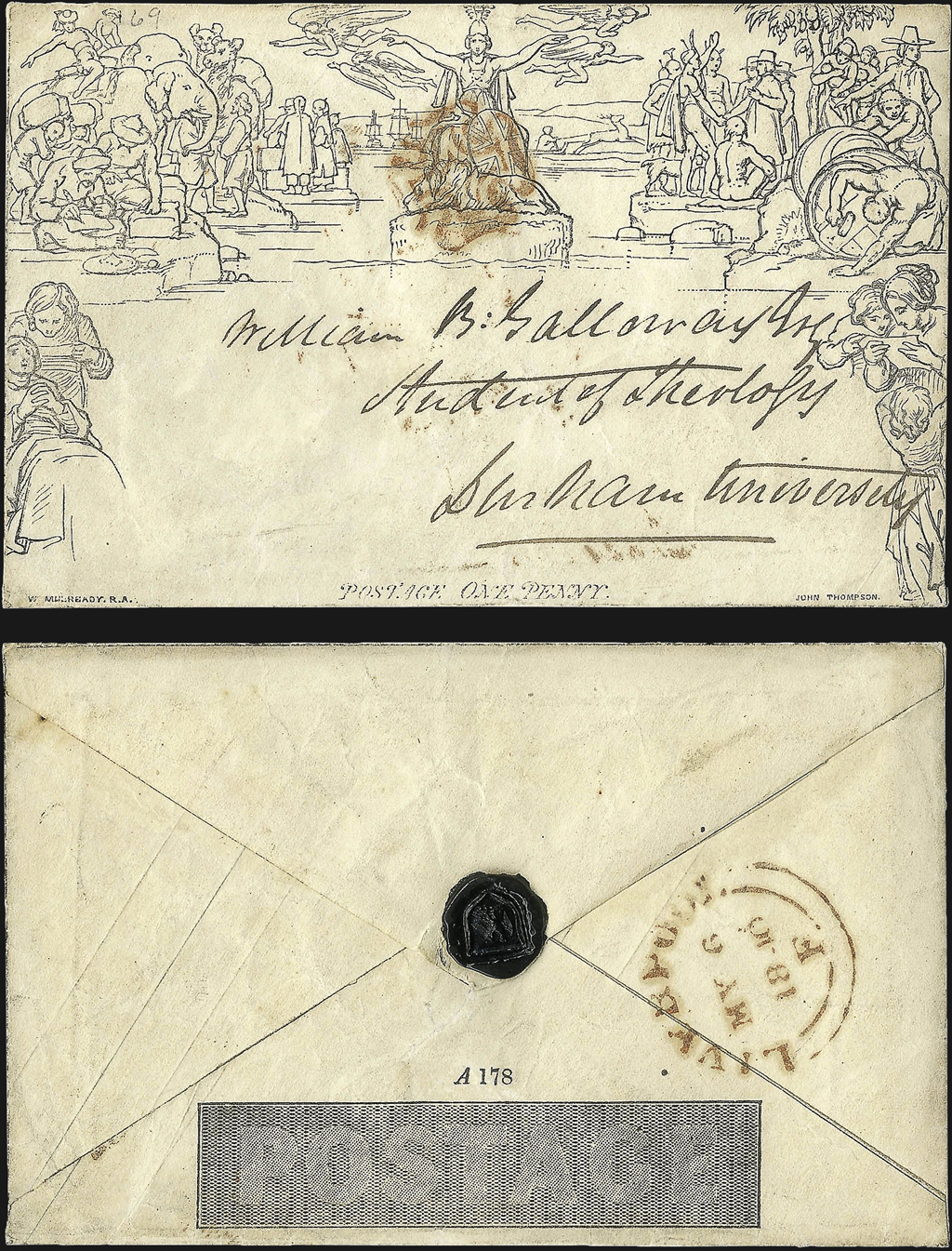 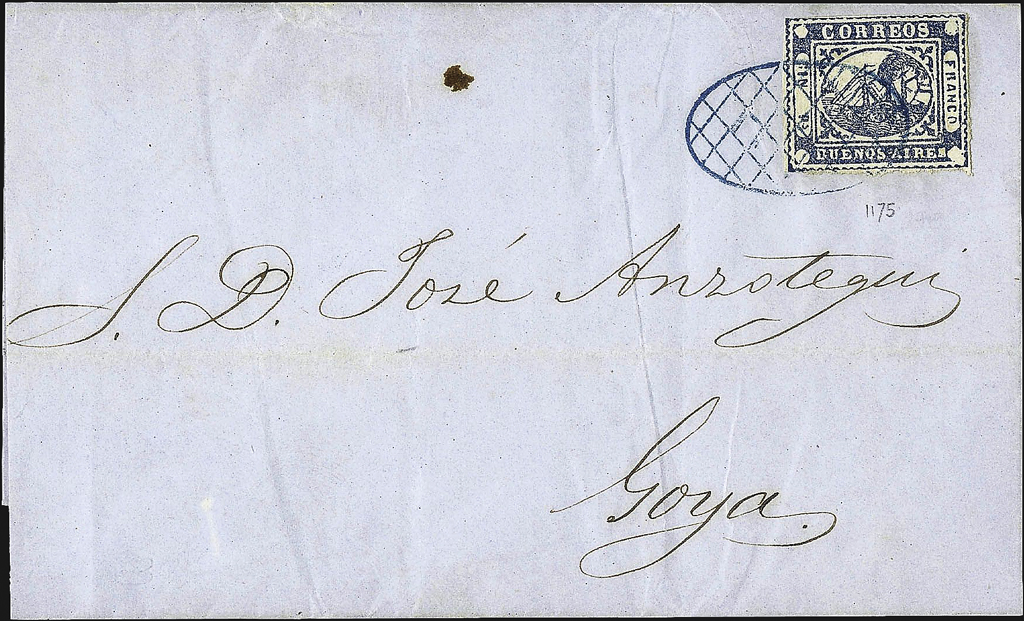 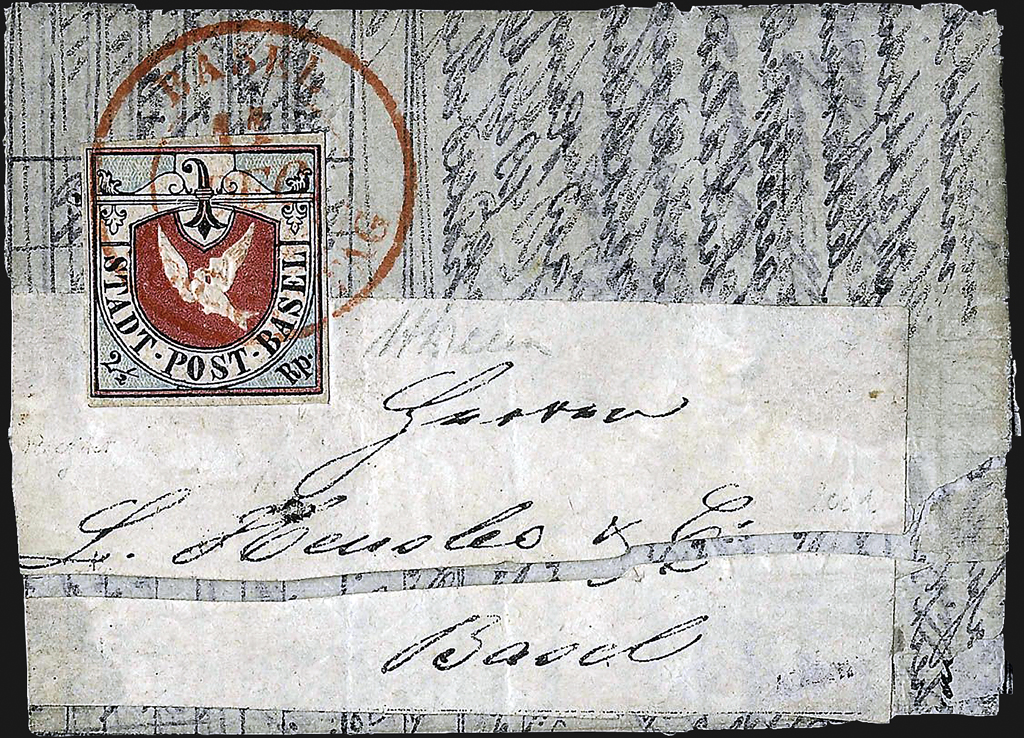 An outstanding folded newsletter franked with an 1845 Basel Dove (Scott 3L1) is estimated to bring $15,000 to $20,000 in the Siegel sale of the Richard Frajola collection.

It is always a treat to get to see stamp dealers’ own collections.

Dealers typically have access to the best and most interesting material on the market. Their jobs entail spending all day looking at — and researching — stamps and postal history, something the rest of us can only indulge in our spare time.

On the other hand, many dealers feel uncomfortable collecting areas that put them in direct competition with their customers. For example, a leading specialist in China might build an impressive collection of Ethiopia instead, while a major British Empire dealer happily indulges his love for German States.

Richard Frajola is widely acknowledged as one of the leading experts in United States postal history. He runs a popular online message board that is frequented by many leading philatelists and postal historians, and is a co-author of several books, including The Pony Express — A Postal History, published by the Philatelic Foundation in 2005 and now available as a free download from his website, rfrajola.com.

His most recent work is the 300-page Mails of the Westward Expansion, 1803-1861, published earlier this year, a project he recently described as exhausting.

On May 19, Robert A. Siegel International will offer Frajola’s collection of worldwide classic covers, revealing what the man has been doing lately to relax.

“After ‘Paying the Postage,’ I was looking for something that would let me have some fun and learn more about worldwide postal history,” said Frajola in a phone conversation on April 27.

He was referring to his fascinating five-frame exhibit, “Paying the Postage 1776-1921,” which mixed stamps and postal history with coins and bank notes to show what Americans pulled out of their pocketbooks in order to mail a letter at various times in history. It was exhibited in the court of honor at the Washington 2006 international stamp show and can also be viewed at his website.

Frajola noted that he wanted to stay away from competing with clients, but still feed his passion. He hit on a simple but compelling concept: Show the world’s classic stamps used on cover, paying the rates for which they were intended.

He set a few criteria. He would include only imperforate stamps and postal stationery issued before 1860, and show only solo frankings. And each stamp and cover had to be of superb quality.

He readily admits the result is far from complete, but that hardly seems a detraction. The Siegel sale runs to more than 180 lots, many of them spectacularly beautiful and scarce examples of the earliest postage stamps.

“A lot of my pride is for items that have something special, beyond the single franking,” Frajola said.

His original idea was to include the coins that would have been used to pay for each stamp, but one of the things he discovered along the way was that mid-19th-century European pocket change often consisted of base coinage and tokens, rather than the silver and gold that made his previous exhibit so dazzling.

He also found that he had to eschew most international rates, because they would have overwhelmed the collection with repetitive material.

“I was able to compare the different systems in each country for figuring the cost of postage,” he said. “Britain started out with a flat rate, and the U.S. eventually got there, too. France did it by weight, the Germans and others by distance. I learned a lot.”

The most expensive item in the collection is a folded newsletter franked with a Basel Dove (Scott 3L1), the 1845 Swiss local issue printed in three colors that is widely held to be one of the most beautiful of the classics.

“Seldom encountered in this outstanding condition on such an eye-appealing entire,” is how the sale catalog describes it, assigning an estimate of $15,000 to $20,000 that Charles Shreve, who prepared the collection for Siegel International and is running the sale in association with Siegel, calls “conservative.”

“I put the postal stationery right in with the stamps,” Frajola said. “For me, they belong together.”

There is a New South Wales 1-penny “Sydney View” stamp of 1850, in a plate variety with no clouds in the design (Scott 2ck), on an elegant pink printed circular locally addressed with a fancy boxed “6 O’Clock” delivery handstamp in the middle.

In the sale catalog, the lot is described as “the only known single use” of the 1d Sydney View on cover — but Frajola said that’s not quite accurate.

“It’s the only nice one,” he laughed.

Another interesting tidbit that Frajola learned while building his collection concerns stamps of the Papal States, a forerunner to unified Italy. Most on-cover usages have the stamps on the back, but those represent a postage due amount, not prepayment, so they fell outside his scope.

“Papal States covers are much harder to find franked on the front,” he said.

Frajola exhibited his collection as “The Cheap Postage Revolution” at Texpex, the annual stamp show in Dallas-Fort Worth, in 2014. It won a vermeil.

“It doesn’t tell a good story,” he said, explaining that the trend these days is to build narratives in exhibits — mere quality doesn’t impress judges the way it once did. Frajola recalled showing his first exhibit, as a junior, at the Sipex exhibition in Washington, D.C., in 1966.

He realized he had reached his limit with his current collection a couple of years ago, when he began pursuing a cover with a scarce Double Geneva (Scott 2L1), the 1843 Swiss cantonal stamp.

He was outbid at $45,000, and saw that he would never be able to afford one in the quality he sought. “I gave up,” he said. “I could have easily paid that much as a dealer, but not as a collector.”

Nonetheless, his collection achieved his goals of having some fun and learning.

“I wanted things I could look at and say, this is really pretty,” Frajola said. “I wanted something that doesn’t take three days of research to appreciate.”

Viewing will take place at the Europhilex stamp show in London’s Business Design Centre on May 13-16, and at Siegel’s showroom at 60 E. 56th St., New York, N.Y., on May 18. Lots also can be viewed at StampAuctionNetwork.com, and in high resolution at the Siegel website.

The sale takes place at Siegel’s showroom on May 19, in two sessions beginning at 10:30 a.m. A 15 percent buyer’s premium will be added to all hammer results.