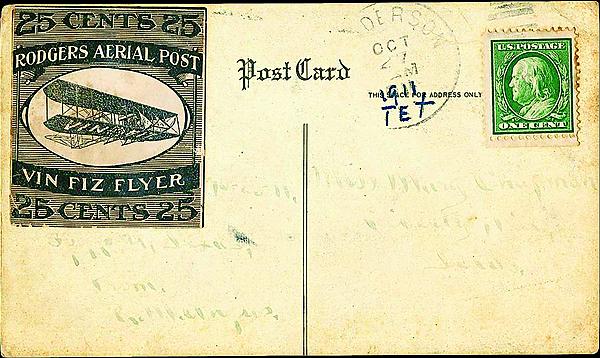 A newly discovered picture postcard franked at left with the 25¢ Rodgers Aerial Vin Fiz Flyer stamp from 1911 will be offered during the Nov. 18-19 Spink USA auction in New York City. 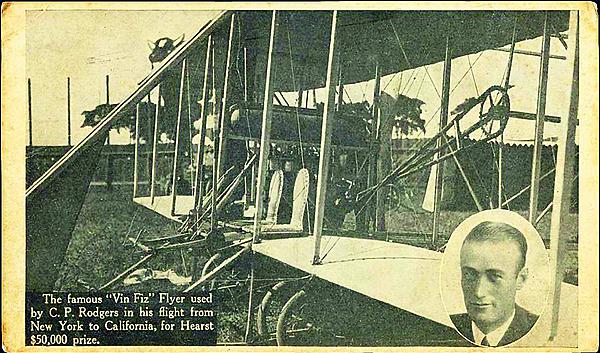 The picture side of the newly discovered picture postcard franked with the 25¢ Rodgers Aerial Vin Fiz Flyer stamp. 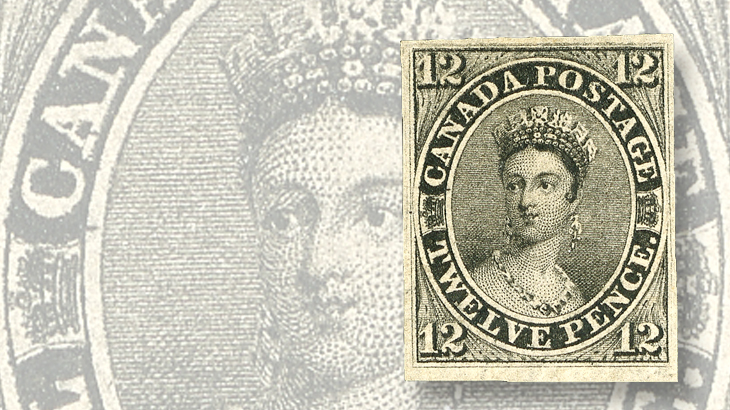 A rare unused Canada 1851 12-penny black Queen Victoria stamp on laid paper will be offered Nov. 18 during the Spink auction in New York City.
Previous
Next

The rare 1911 25¢ Rodgers Aerial Post Vin Fiz Flyer stamp (United States Scott CL2) is known as the first stamp in the world to depict an airplane. A recently discovered example on cover will be auctioned Nov. 19 by Spink USA in New York City.

The stamp is classified in the Scott Specialized Catalogue of United States Stamps and Covers as an air post semi-official stamp. The only other example in this category is the 1877 5¢ Buffalo Balloon stamp (Scott CL1).

The Vin Fiz Flyer stamp is rare either off cover or on cover.

With this new discovery, there are now nine examples known on cover: one affixed to the back of an envelope, and eight franking postcards (including one on a 1¢ McKinley postal card addressed to Germany). All of these examples are additionally franked, as required, with a 1¢ green Benjamin Franklin regular issue postage stamp (Scott 374).

The stamps were created privately in association with a 1911 cross-country flight by Calbraith Perry “Cal” Rodgers, who was competing for a $50,000 prize offered by newspaper publishing magnate William Randolph Hearst.

The flight sponsor was J. Ogden Armour, president of the Chicago meat-packing company Armour & Co. that was also the manufacturer of Vin Fiz grape soft drink. The stamps were sold by Rodgers’ wife, Mabel, for use on mail carried on the flight. All 13 surviving examples of the stamp are trimmed close on at least one side.

The postcard offered by Spink is franked with the 1¢ Franklin tied by an Anderson, Texas, duplex cancel from Oct. 27, 1911, with part of the postmark retraced. It is the only known example with an Anderson postmark.

The postcard is addressed to Liberty Hill, Texas.

The picture side shows the actual plane with an inset photo of Rod­gers and a printed inscription: “The famous ‘Vin Fiz’ Flyer used by C.P. Rodgers in his flight from New York to California, for Hearst $50,000 prize.”

The affixed Vin Fiz stamp has a 12-millemeter tear, a small scuff at right and other small faults.

The postcard is accompanied by a 2015 certificate from the Philatelic Foundation.

The $75,000 value listed in the Spink auction catalog for this item matches the value assigned in the 2015 Scott U.S. Specialized catalog for the stamp on postcard.

The postcard is being offered during Spink’s two-day auction event taking place Nov. 18-19.

The auction is described in two separate catalogs that are both available online at www.spink.com.

The first consists of stamps from the Charles W. Adams collection of United States and Canada, with 213 lots of material ranging from the earliest U.S. issues to classic Canada and modern errors.

The auction also includes a large number of proofs from both countries, often in pairs, strips of three or blocks of four.

A choice item from the selection of Canadian stamps is an unused example of the 1851 12-penny black Queen Victoria on laid paper (Scott 3) with disturbed original gum.

The stamp is described by Spink as sound, “brilliantly fresh and crisp overall, with intense color and a highly detailed impression, four large and well balanced margins.”

The stamp is formerly from the collection of General Robert Gill (Robson Lowe, October 1965) and the Consort Collection (Stanley Gibbons, November 1977). It is accompanied by a 1977 certificate from BPA Expertizing (England) and 1980 and 2015 Philatelic Foundation certificates.

The value listed in the Spink catalog for this classic issue of Canada is $175,000, which is the value for the unused stamp in the 2015 Scott Classic Specialized Catalogue of Stamps and Covers 1840-1940.

The Adams collection sale is followed on Wednesday afternoon by the Philatelic Collector’s Series sale, which concludes with a session on Thursday afternoon.

The Vin Fiz Flyer cover is just one of the items from the Philatelic Collector’s Series sale, which also includes Canada and British North America colonies stamps and covers, plus United States and possessions, worldwide stamps, large lots and more.

Another special item, from a sale that offers many, is the 1851 Nova Scotia double-shilling cover to India, ex-Dale-Lichtenstein, Halifax, Mayer and Gross.

The envelope is franked with a horizontal pair of the 1851 dull violet 1-shilling stamp (Scott 7) and a single yellow green 6d stamp (4) tied by barred oval cancels on a mourning cover to “HM’s 9th Regiment” in Madras.

Spink notes that the reverse of cover displays a “Sydney/MY 21 1853” split ring originating circular datestamp, a Halifax transit and red framed G.P.O. marking. With a Royal Philatelic Society certificate, the cover is listed with an estimate of $50,000 to $75,000.