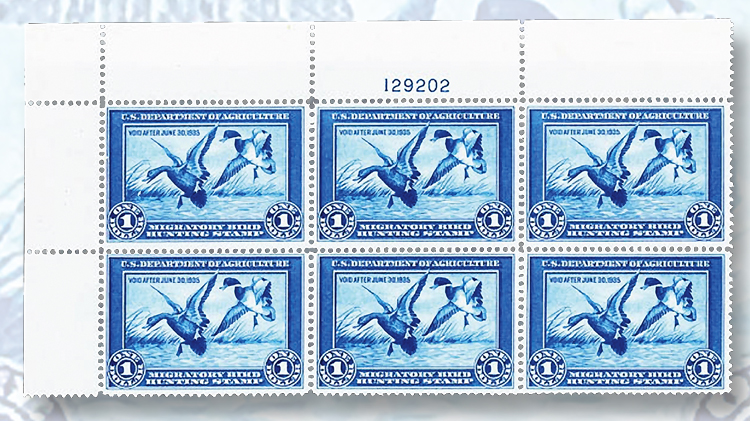 The Daniel F. Kelleher sale included this hard-to-find, well-centered plate block of six of the 1934 first federal duck stamp, which was auctioned for $13,800. 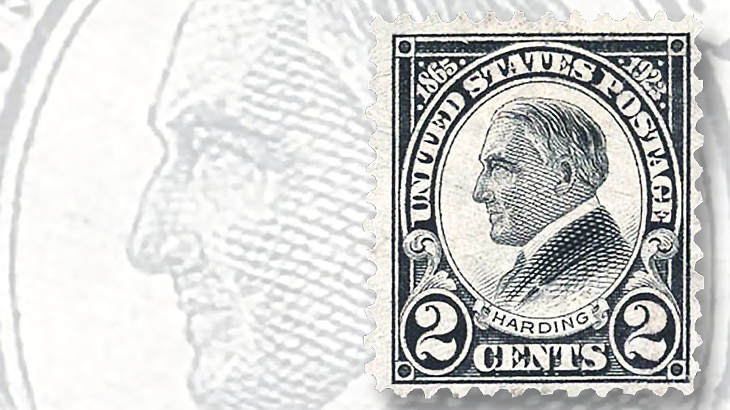 A scarce perf 11 1923 2¢ black Harding rotary press stamp, described as used but with barely a discernible trace of cancellation, sold for $34,220 in the recent Daniel F. Kelleher auction. 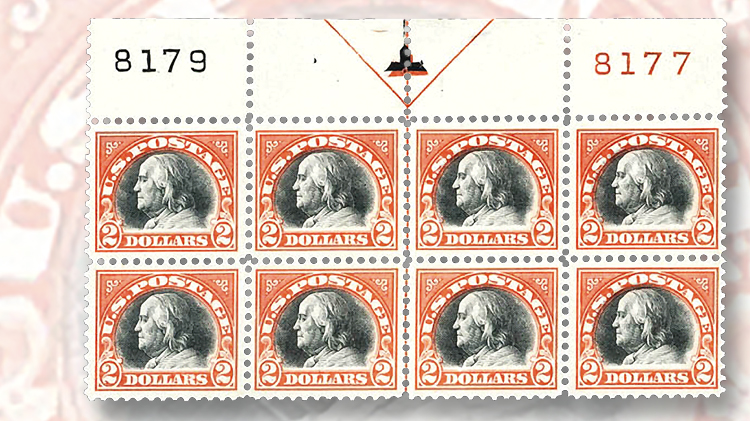 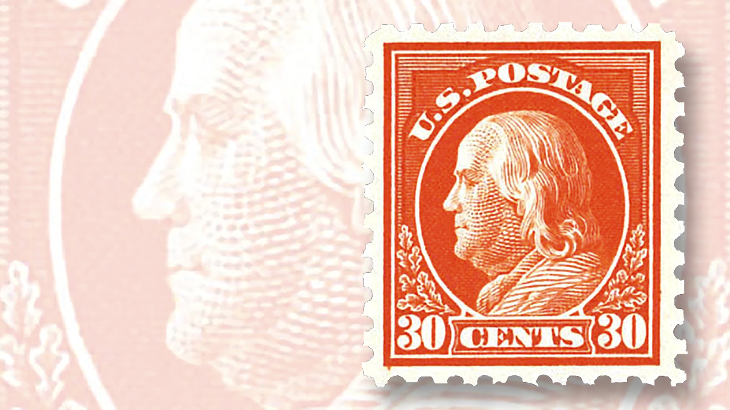 This never-hinged unwatermarked gauge 10 30¢ stamp from the 1908-22 Washington Franklin series sold in the Kelleher auction for $10,620. 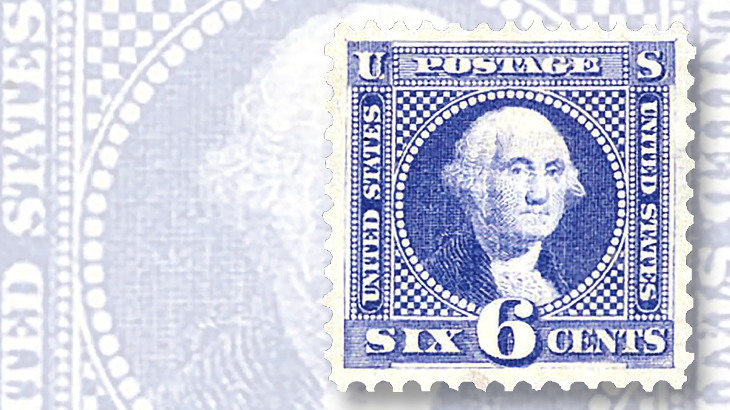 The Kelleher auction offered an unused example of the 1869 6¢ Washington stamp with excellent centering; it sold for $8,850. 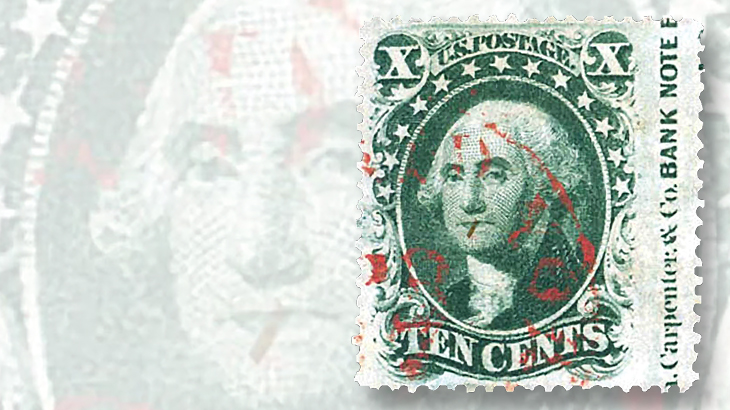 A perforation variety on the 1859 10¢ green Washington type V stamp resulted in the margin imprint appearing on the stamp. This used stamp sold at the Kelleher auction for $413. 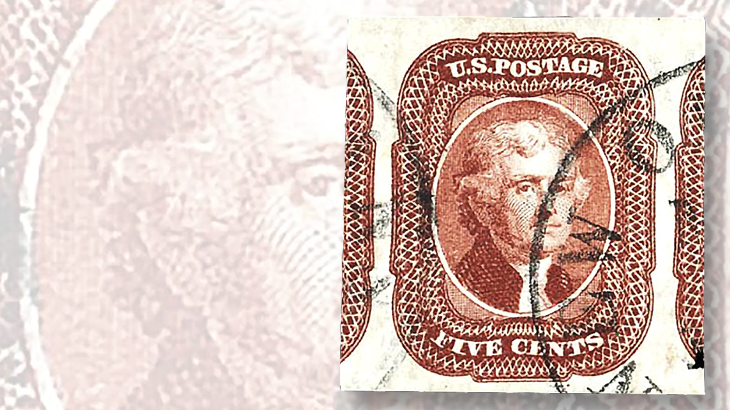 The Nov. 29-Dec. 1 Daniel F. Kelleher auction in Danbury, Conn., included a top graded example of the imperforate 1856 5¢ Jefferson stamp, which sold for $7,080.
Previous
Next

The auction firm of Daniel F. Kelleher held another of its semiannual Flagship sales of United States and worldwide stamps and covers Nov. 29-Dec. 1 at its headquarters in Danbury, Conn. The auction featured some exceptional examples of 19th- and 20th-century U.S. favorites.

A superlative example of the imperforate 5¢ Jefferson of 1856 (Scott 12), with full margins at top and bottom and large pieces of the neighboring stamps to left and right, struck with part of a neat New Orleans circular cancel, was graded superb 98-jumbo by the authentication firm Professional Stamp Experts.

Said to be one of just four known to achieve that grade level, with none higher, the auction house pointed out that “the lucky purchaser of this beautiful stamp will never have to upgrade.” It sold for $7,080, including the 18 percent buyer’s premium added by Kelleher to all lots.

Nineteenth-century stamp production was essentially a handmade process, which helps explain the engraving varieties as well as some of the production freaks and oddities that are encountered on these issues.

The Kelleher sale included an example of the 1859 10¢ green Washington, type V (Scott 35) with its right-hand perforations misplaced far enough that the stamp “captured” a portion of the inscription from the sheet margin, reading “…Carpenter & Co., Bank Note E…”

The 10¢ of that issue comes in several types, distinguished by the degree to which the scrollwork at the top, bottom or sides of the stamp design is present, missing or recut after the process of transferring the original die to the printing plate.

This manual work was hard to do precisely and it shows. Types I-IV of the 10¢ occur together on the first printing plate, made in 1855. They have variations at top and bottom, but all show the side ornaments of the design complete.

Type V, from the second printing plate, shows the top and bottom generally complete, but the sides are slightly cut away. Unlike the first plate, which was used for both imperforate and perforated stamps, the second plate was used only for perforated stamps. These are the commonest of the 10¢ issues — until one considers other production problems.

Shifted perforations were not an uncommon problem, as perforating equipment was still a fairly new technology in 1859 and, like the printing itself, was done by hand. Finding a stamp with such a dramatic result as the oddity in the Kelleher sale is nonetheless a nice bonus.

The sale offered another splendid stamp that usually isn’t found so splendid: the 6¢ Washington from the 1869 Pictorial series (Scott 115), unused with lightly hinged gum, excellent centering and rich color. Called “a true condition rarity,” it sold for $8,850.

Moving on to the 20th century, the auction included a 30¢ stamp, unwatermarked and perforated gauge 10, from the popular Washington-Franklin series of 1908-22 (Scott 476A). This scarce stamp is normally found with such mediocre centering that the Scott catalog values it in a grade of fine, rather than the usual very fine.

However, the one in the Kelleher sale was described as extremely fine, and at $10,620, its realization reflected that. It also boasted never-hinged gum and bright color.

From the high-value end of the Washington-Franklin series, a never-hinged plate number block of eight of the 1918 $2 orange red and black shade (Scott 523) went for $30,680.

An intriguing example of the very scarce 2¢ Harding of 1923, printed on a rotary press but with perfs measuring 11 rather than 10 (Scott 613), appeared not to show any postmark, despite the fact that all other known examples are used.

Whether the hazy mottling over parts of the design is a natural artifact of its printing or, as the accompanying certificates surmise, a trace of cancellation, is hard to determine.

If indeed unused, the stamp would be unique. Regardless, the relatively well-centered example sold for $34,220.

From the back of the book, a stunning, well-centered plate number block of the first U.S. federal migratory bird hunting stamp (Scott RW1), never hinged with radiant blue color, fetched $13,800.

Plate blocks of the first duck stamp, issued in 1934, are very hard to find, and require enormous patience to obtain in good quality.