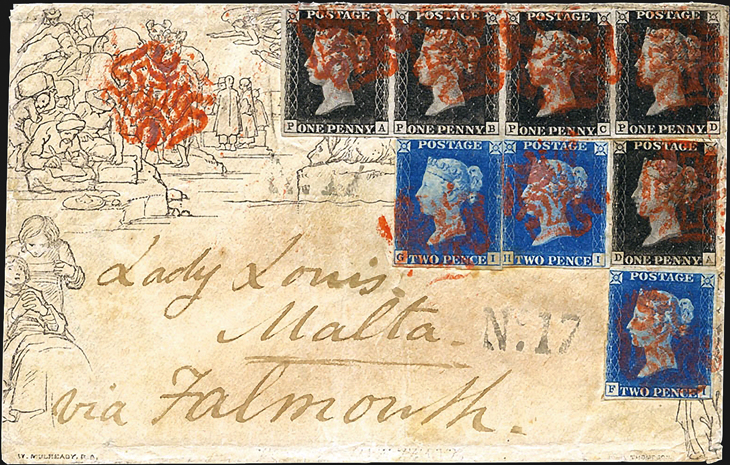 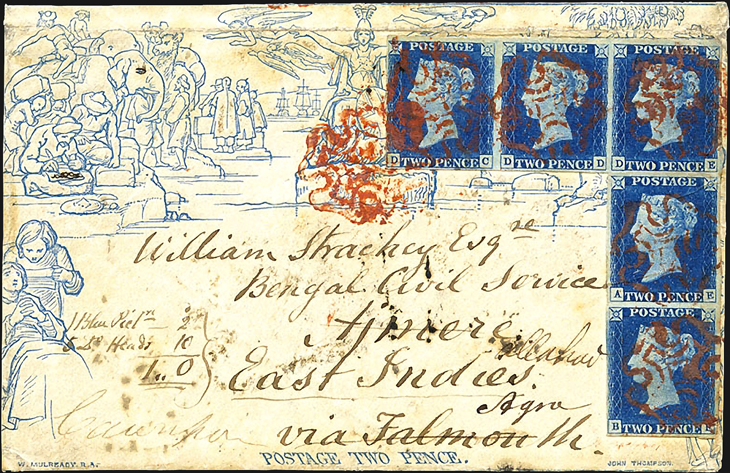 A very rare Mulready cover of Great Britain uprated with five 2-penny stamps for mailing to India in September 1840 brought £44,000 (about $75,000, with buyer’s premium) in David Feldman’s British Empire sale in December in Geneva, Switzerland.
Previous
Next

David Feldman in Geneva offered a sale of British Empire on Dec. 11 that included the second part of the Tatiana collection, with some famous gems as well as humbler items that simply tell a great story.

Standing out was one of the most famous and spectacular pieces of British postal history in existence.

Like many budding collectors, I remember as a child browsing through my father’s coffee-table books about philately and reading about the famous “Lady Louis” cover: a 1-penny Mulready envelope uprated with five Penny Blacks and three Two-Penny Blues, addressed to Lady Louis, Malta, via Falmouth, and posted in 1841 from Bristol to Malta.

It is easy to admire the cover as a quaint relic of a lost world, from its finely engraved adhesives and the charming, almost cartoonish design on the envelope, to the toning of the paper to the quill-pen handwriting and delightfully minimalist address — just a surname and a country. It is an artifact that could never be replicated in our modern era.

The cover also can be appreciated as a work of art, or rather, several works of art in one.

It is a marvelous mixed-media collage, elegant in its asymmetry, incorporating fine intaglio engraving, pen-and-ink drawing, calligraphy and the energetic application of several vivid, orange-red Maltese Cross cancellations defacing each of the stamps, with one more strike at left for good measure.

On top of all this, the cover is a rarity, for it also represents a rather intriguing failure of vision.

Sir Rowland Hill, for all his genius in devising a revolutionary system of using adhesive stamps to prepay postage — a system that would launch Britain and the entire world into the modern era with cheap and speedy long-distance communication — somehow failed, at the outset, to give his scheme the one thing it needed to work globally: a stamp worth more than 2 pence.

A letter from England to the British colony at Malta, in the middle of the Mediterranean, cost a full shilling, and anyone wishing to send an epistle prepaid — not yet required, but fast becoming the social norm — had no choice but to smother the envelope with stamps.

Britain would not issue its first 1-shilling stamp until 1847.

Even then, the first such adhesive turned out to be a cumbersome, octagonal affair, manually embossed one-by-one on the same kind of equipment used to apply raised seals on important documents.

It would be several more years before a correspondent in Britain could prepay the relatively high postage on a worldwide letter as handily as on a domestic one.

As a result, the majority of overseas letters in the early 1840s continued to be either prepaid in cash or sent unpaid.

Only 50 or so Mulready envelopes and lettersheets (Scott U1-U4) are recorded sent abroad, and only a dozen of these are uprated with a 1d black (Scott 1) or 2d blue (2).

The Lady Louis cover, “one of the great covers of British philately and a superb exhibition item,” sold for £66,000, or about $94,000, including the 20 percent buyer’s premium Feldman adds to all lots.

The next lot in the sale was a similar cover: a 2d Mulready, uprated with five 2d blues and sent to India in September 1840.

Both this and the Lady Louis cover previously belonged to numerous famous collectors, including William H. Gross.