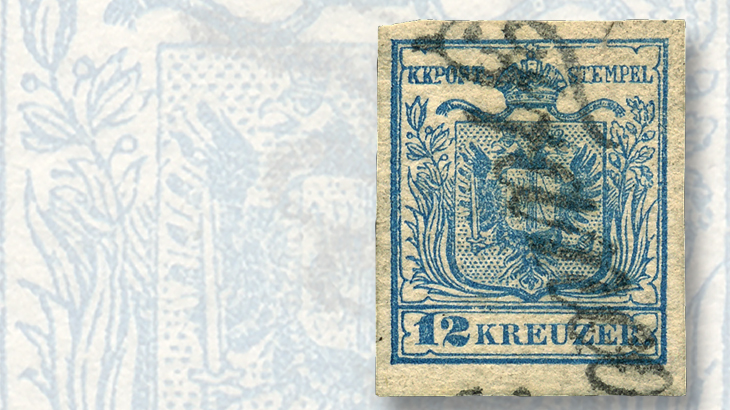 This example of Austria’s unissued 1850 12kr Coat of Arms stamp will be offered during the May 30 sale by Christoph Gaertner in New York City. 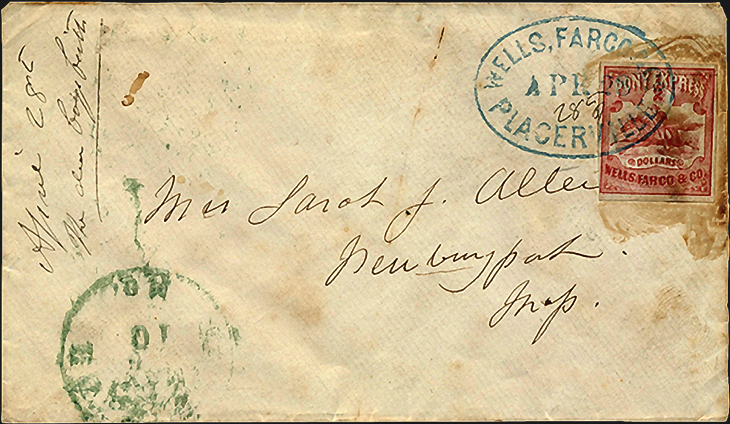 Described as the earliest recorded usage of any Pony Express stamp, this 1861 cover franked with the $2 red stamp and mailed from Placerville, Calif., to Newburyport, Mass., is also included in the May 30 Gaertner auction.
Previous
Next

The Christoph Gaertner auction firm is traveling from Germany to New York City for World Stamp Show-NY 2016, and to present the Gaertner Worldwide Rarities auction.

This auction includes a strong showing of Germany and German states, beginning with the Rolf Goldschagg collection of Baden.

The award-winning collection contains 97 important stamps, multiples, pieces, and covers of Baden philately, according to Gaertner, including three first-day covers from May 1, 1851, and many other unique items, described at length in the auction catalog.

Among the single stamp rarities from Europe is one from Austria that was never issued.

The 1850 issues of the Austrian monarchy are five values of 1 kreuzer, 2kr, 3kr, 6kr, and 9kr, each showing the double-headed eagle coat of arms.

A sixth stamp, the 12kr blue, exists, but was not issued. The German Michel specialized catalog for Austria describes the stamp and lists it with a value of E150,000 ($172,500).

Just six examples of the 12kr are known, all marked with cancels; this one has the ornate “Franco” experimental marking across the front. Gaertner also notes a “small tiny marginal tear.” This example was formerly in the collections of Thurocy, Baron Alfons de Rothschild, Leavitt J. Bulkley and others, and is accompanied by a 2011 Uwe Steiner VOB certificate signed by Friedl and Ulrich Ferchenbauer. The stamp is listed by Gaertner with a starting price of E90,000 ($103,500).

The Americas section offers the earliest recorded use of any Pony Express stamp. The 1861 $2 red stamp (Scott 143L1) is affixed to a paste-back envelope and tied with the blue Placerville, Calif., Wells Fargo datestamp for April 28.

The cover, addressed to Newburyport, Mass., traveled east by a relay of riders, entering the U.S. Mail at St. Joseph, Mo., on May 10, 1861, and struck with a green arrival circular date-stamp.

The cover is documented by an American Philatelic Society expert committee report from Jan. 16, 2002, identifying it as the $2 red used on the earliest documented cover, genuine in all respects. A 2013 Philatelic Foundation certificate also identifies the cover as genuine. The starting price from Gaertner is E150,000 ($172,500).