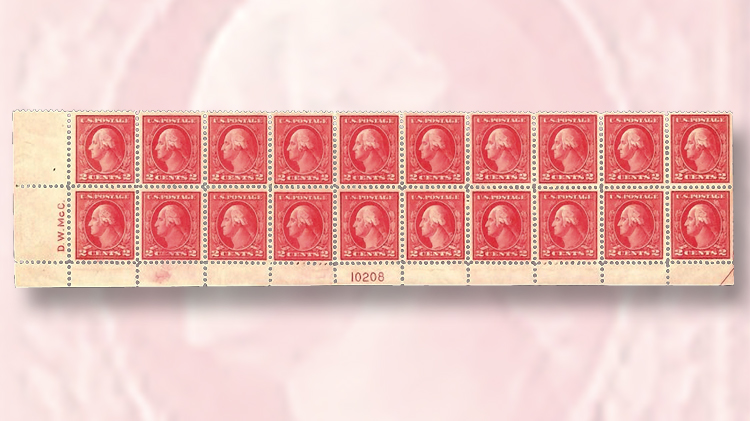 A stunning block of 20 2¢ Washington-Franklin stamps including both types I and Ia sold for $18,400 at the September Cherrystone Auctions sale in New York City. 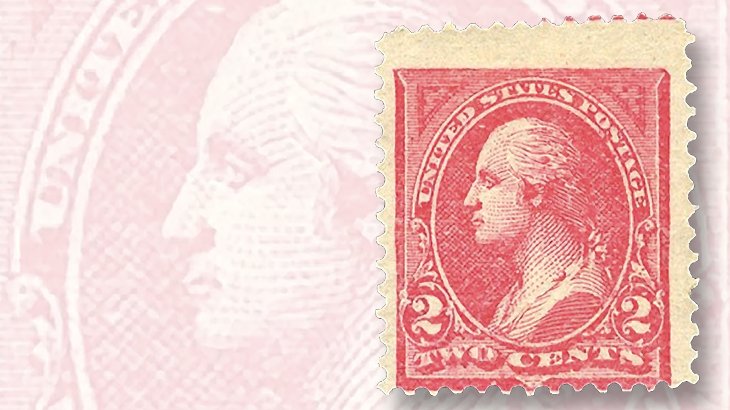 An unused 19th-century postal forgery resembling the 1894 2¢ Washington definitive sold for $322 at Cherrystone’s sale in September.
Previous
Next

While there often seems to be no end to rare classics, gorgeous commemoratives and exotic back-of-the-book issues headlining stamp-auction results, sometimes it’s the workhorse 20th-century definitives that can steal the show.

Cherrystone Auctions held a sale of worldwide rare stamps and postal history on Sept. 20-21 in New York City. One of the leading lots was a large block of 20 2¢ stamps of the Washington-Franklin series, which was current in the United States from 1908 to 1922.

Comprising the bottom two rows of the sheet and including the printing-plate number 10208 near the middle of the bottom selvage, the block actually contains two different stamps: 18 are what philatelists characterize as type Ia of the 2¢ design, while two — the fifth and sixth stamps in the bottom row — are instead type I.

The differences between a 2¢ Washington type I (Scott 499) and type Ia (500) are subtle, so turning to the Scott Specialized Catalogue of United States Stamps and Covers for an explanation and illustrations is essential.

The die for this workhorse 2¢ definitive, which paid the basic domestic letter rate for many years and was printed by the hundreds of millions, underwent numerous minor modifications during its life. Collectors group these according to seven types (I-VII) and two subtypes (Ia, Va). The differences lie in details of the shading and the strength of certain lines in the design.

Type I, which was used for both flat-plate and rotary-press printings, has faint lines on the button and rope of Washington’s toga, among other distinguishing features. Type Ia, which was used only on flat plates, has all of the lines heavier.

When plate 10208 was made up, most of the sheet used the type Ia die, although two of the impressions — positions 95 and 96 in the sheet — used type I. When squinting at the photo of the lot in the Cherrystone sale catalog, this difference becomes apparent in the noticeably lighter shading of Washington’s neck on the pair of stamps immediately above and to the right of the plate number.

The type Ia printing was small, which is reflected in the fact that Scott 500 lists for roughly 1,000 times more than the minimal-value 499. Mixed-type plate blocks are highly sought after, and even type I-Ia pairs are valuable. A block of 20 is a real showpiece.

Except for one stamp well away from the six comprising the plate block, the rest of the block offered by Cherrystone was never hinged. Including the 15 percent buyer’s premium charged by the firm on all lots, it sold for $18,400.

Not all of the lots in the sale were expensive — or even genuine. An unused 19th-century postal forgery, resembling the 2¢ Washington definitive of 1894 but with its design printed from a crude copper electrotype rather than steel engraving, sold for $322.

While ownership of postal forgeries is technically illegal, federal authorities have never attempted to prosecute philatelists for collecting or trading in them, and auction firms sell them openly. The Scott U.S. Specialized catalog began listing them in a section of their own (titled “Postal Counterfeits”) a few years ago; the forgery offered by Cherrystone is listed as Scott 250(CF3).