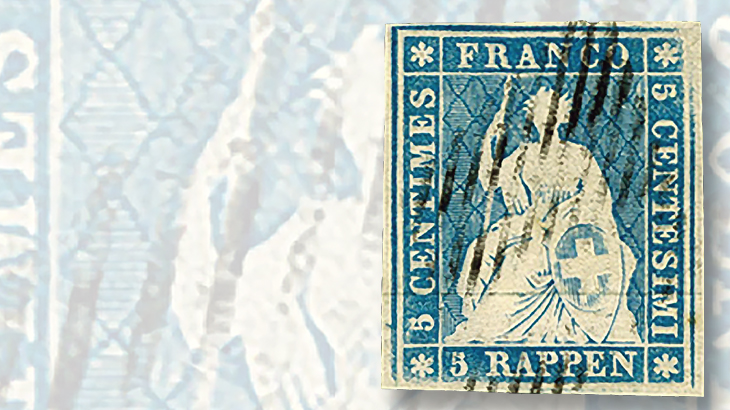 Heinrich Koehler Auctions’ sale in Wiesbaden, Germany, in September offered a used Swiss 1854 5-rappen stamp incorrectly printed in blue instead of brown. It sold for $16,000. 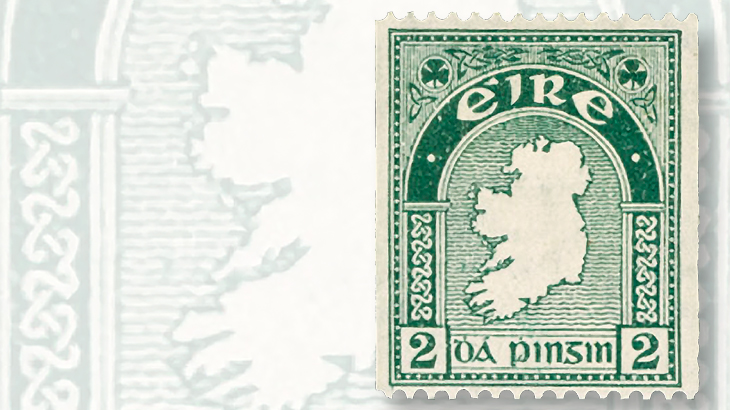 A scarce, experimental 1935 2-penny coil stamp of Ireland, unused and well centered, realized $13,300 at the Koehler Auctions sale in Germany in September.
Previous
Next

On Sept. 21-24, Heinrich Koehler Auctions held a sale of worldwide stamps and covers at the headquarters in Wiesbaden, Germany. The firm is part of the Global Philatelic Network that includes Corinphila, H.R. Harmer and John Bull.

One of the more unusual items was a used Swiss 5-rappen blue stamp from 1854. This early definitive series, known affectionately as the Strubels, gets its nickname from the olive wreath on the head of the allegorical Sitting Helvetia figure. Her frizzy, unkempt appearance is reminiscent of the title character in Der Struwwelpeter (“Shockheaded Peter”), a somewhat horrific collection of 19th-century German stories about misbehaving children.

Collectors of Switzerland know that the imperforate Strubels, which were current from 1854 until they were replaced by the similar (perforated) Sitting Helvetia series in 1862, are one of the most complex areas of classic philately. The Strubels went through numerous printings resulting in changes to paper, ink, and the silk security threads embedded in each stamp.

Collectors also know that the 5r value was not issued in blue, but in various shades of brown: blue was used for the 10r instead. The rarity offered in the Koehler sale, accompanied by a certificate from a leading German expert, is from the second Munich printing, with a green silk thread, and is likely to have been either a color error or a trial color printing that was used for postage. Some 24 examples are known, though the variety is not listed in the Scott Standard Postage Stamp Catalogue.

It sold for $16,000, including the 20 percent buyer’s premium added by Koehler to all lots.