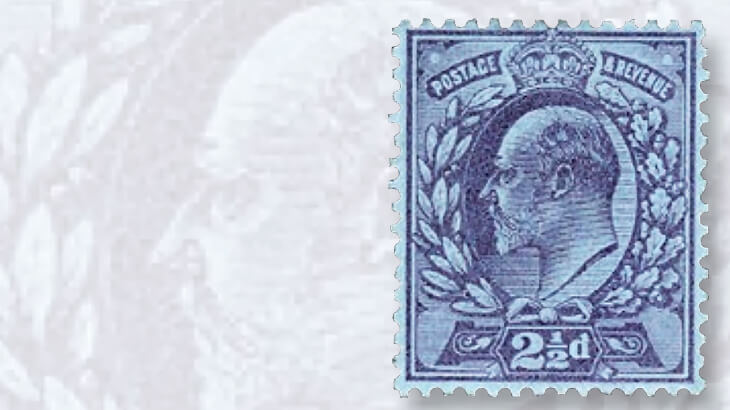 One of the few surviving examples of the unissued purple-on-blue 2½-penny King Edward VII stamp of 1901 was sold by Zanaria in Milan in October for $86,600. 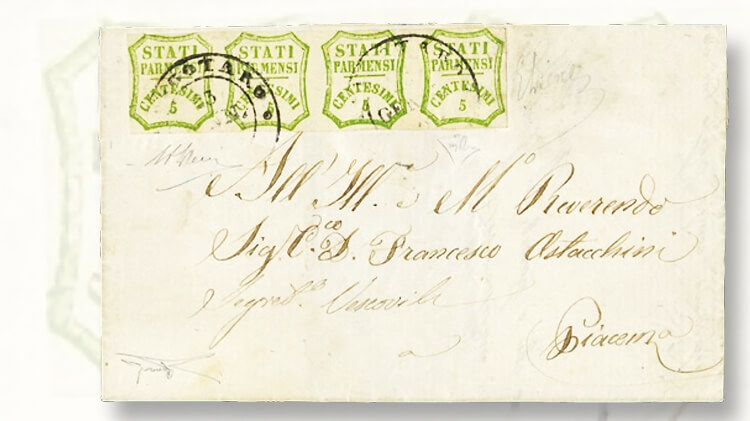 An 1860 cover from the grand duchy of Parma, franked with a strip of four of the 5-centesimo local provisional stamps, is one of three known with this issue. Zanaria sold it for $153,250 in Milan in October.
Previous
Next

In Milan, Italy, the firm Zanaria held a sale Oct. 1 that was packed with desirable classics, including some of Britain’s great rarities. Leading the pack was the famous, rare King Edward VII 6d with an “I.R. Official” overprint for the Inland Revenue department.

Britain began overprinting stamps for official use in the 1880s, applying the names of various departments to current definitives. After some years, collector demand for unused examples of these overprints, which were generally unavailable to the public, became so great that illicit sales by unscrupulous government employees began to be a problem. Use of the overprints was therefore abandoned on May 14, 1904.

The 6d of King Edward VII was issued March 14, 1904, just two months before all Official stamps were withdrawn. Half a dozen examples remain in institutional collections, and it is thought that the total number in private hands is exactly one mint and one used example.

This iconic British rarity, estimated at €50,000, was knocked down at two and a half times that amount. With the 20 percent buyer’s commission added by Zanaria to all lots, that totaled $166,500.

When King Edward VII ascended the throne in 1901 on the death of his mother, Queen Victoria, the post office simply adapted most of the Victorian Jubilee series designs for the new monarch. An exception was made for the ½d, 1d and 2½d stamps, which received a fresh common design.

Each was printed in its respective Universal Postal Union standard color: green for the ½d (domestic postcard), red for the 1d (domestic letter) and, following the example of the Victorian Jubilee series, purple-on-blue for the 2½ (international letter).

Except that, of course, purple-on-blue was not the UPU standard: that was blue. After the initial print run of King Edward VII 2½d stamps was completed, postal officials came to their senses and scrapped them all, reprinting the stamp in ultramarine (Scott 131).

Only a few stamps in the original, unissued color escaped the incinerator. The example in the Zanaria sale, unused with original gum and certified by the British Philatelic Association and others, sold for $86,600.

One of the most spectacular items in the Zanaria sale was a strip of eight of the Queen Victoria “VR” Official. This 1840 issue was identical to the famous Penny Black, but instead of stars in the upper corners of the design, it had the initials VR (for Victoria Regina) to designate its use on Official mail.

However, before the stamps were issued, the idea of using distinct stamps for Official mail was set aside. Except for a few examples that had been distributed on notices to postmasters, only a few archival sheets survived.

Rowland Hill, the father of British postal reform and the first adhesive postage stamps, used these leftovers to personally test cancellation inks. This endeavor was key to the success of his system of prepaid postage labels, which rested on the notion of nonremovable cancels.

The strip of adhesives in the Zanaria sale comes from one such test. Alternate ones have been coated with varnish, and various attempts have evidently been made to remove the ensuing handstamps. A penned note on the back of the strip reads, “the alternate stamps will come off with soap and water.”

The strip, a spectacular remnant of a crucial moment in stamp history, fetched $126,600.

Not to be outdone, Italian postal history also had a number of highlights in the sale, including a marvelous 1860 cover from Parma.

The grand duchy of Parma, like other Italian states, had its own stamps prior to unification with Sardinia in 1860. In 1859, as Garibaldi’s armies threatened, a provisional government took over, issuing a new set of stamps of simple design without the fleur-de-lis crest of the House of Bourbon.

The 5-centesimo low denomination of this provisional set is extremely scarce in genuinely used condition. A locally addressed cover, franked with a strip of four of the 5c yellow green (Scott 12), is one of just three covers known with this stamp, and probably the finest.

Once residing in the famous collection of Maurice Burrus, the cover sold for $153,250.