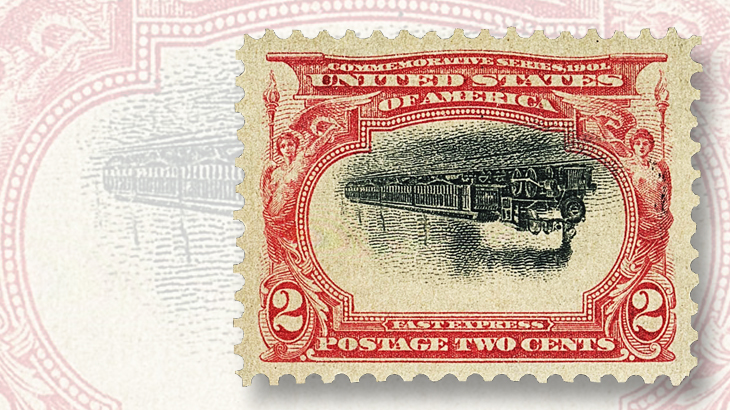 The 2¢ Pan-American invert from the Hanover collection offered by Robert A. Siegel on Oct. 6 is uniquely graded superb 98. The stunning piece brought $195,500. 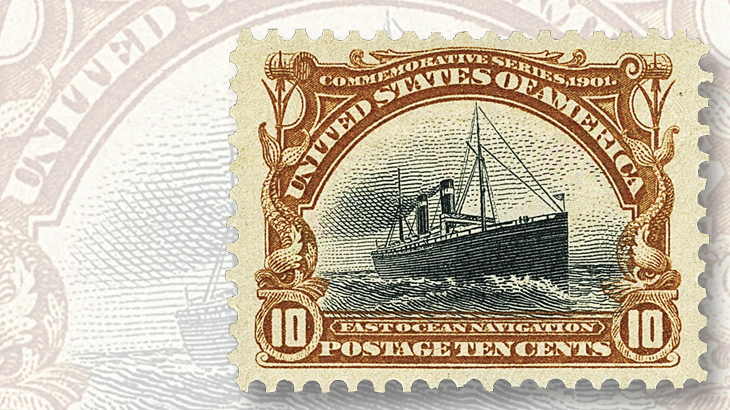 A 10¢ stamp from the Pan-American Expo series, graded superb 98 with jumbo margins and never-hinged gum, the only one so highly rated to date, fetched $21,850 at Siegel’s sale of the Hanover collection on Oct. 6. 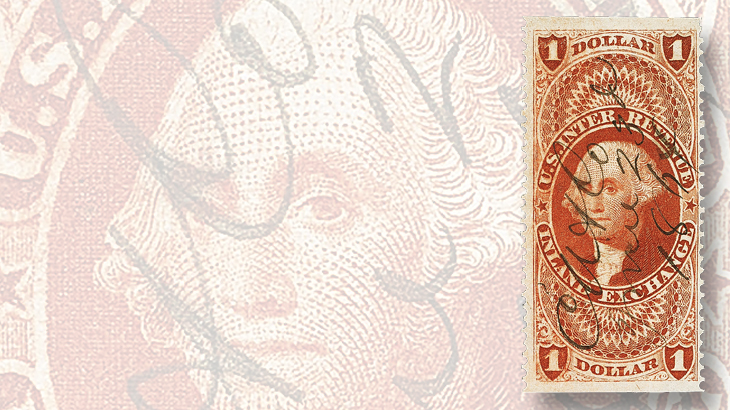 A $1 Inland Exchange stamp with perforations only on the vertical sides, a “rare sound and centered” example, realized $16,100 at the Siegel sale of the Inman collection’s U.S. revenues on Oct. 5. 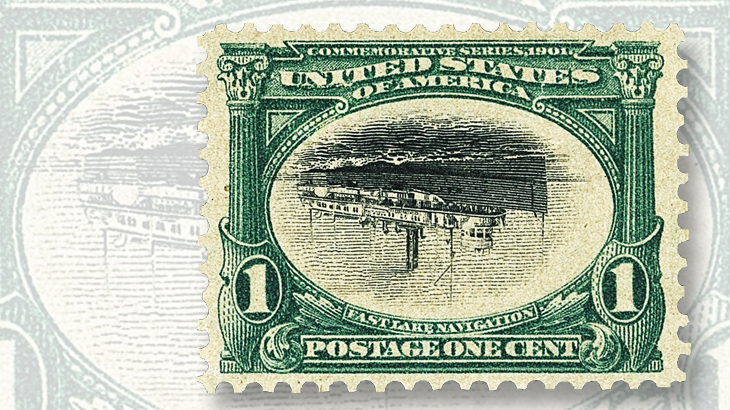 The Hanover collection of U.S. stamps offered by Robert A. Siegel on Oct. 6 included a 1¢ Pan-American Exposition invert of 1901 graded extremely fine 90. It sold for $51,750. 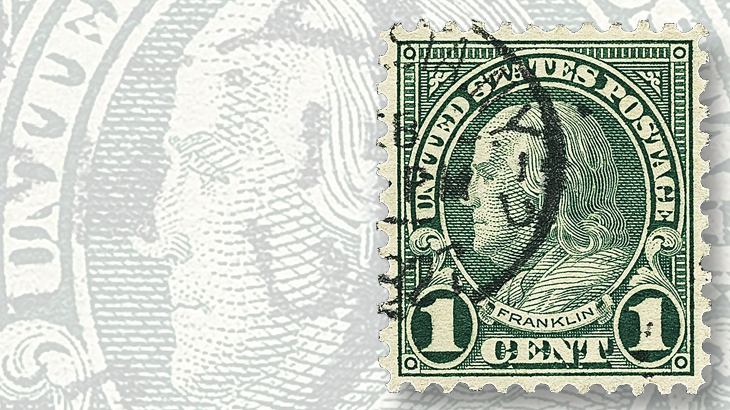 From the Hanover collection, a scarce example of the 1¢ Franklin from the fourth Bureau issue of 1922-1929, very well-centered and graded extremely fine 90, realized $40,250 at the Siegel auction on Oct. 6. 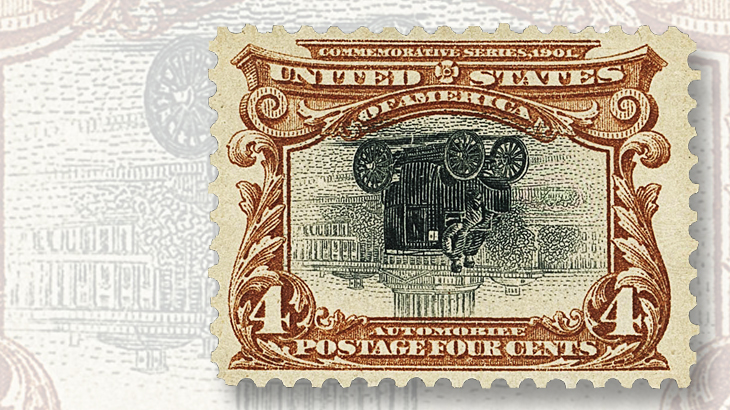 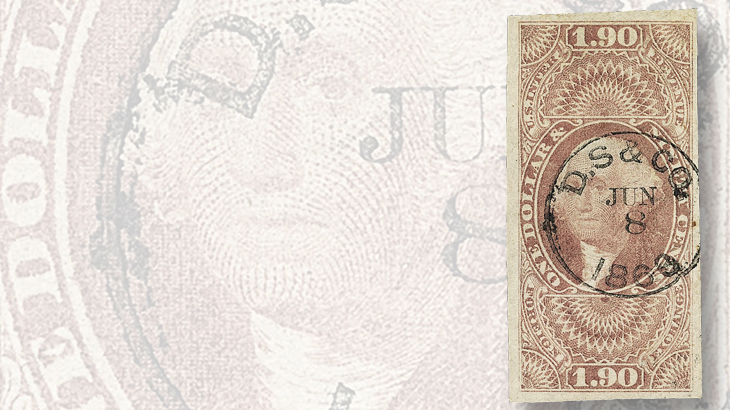 The U.S. revenues from the Grant Inman collection were offered by Robert A. Siegel Auction Galleries on Oct. 5. A first-issue $1.90 Foreign Exchange stamp, imperforate, with a handstamped cancel, sold for $21,275. 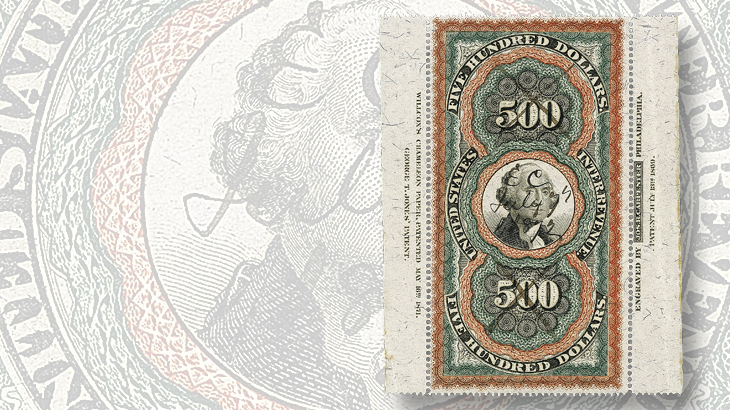 The top realization in the sale by Robert A. Siegel in October of the Inman revenues collection was $40,250 for a splendid example of the $500 Large Persian Rug of the second-issue series. 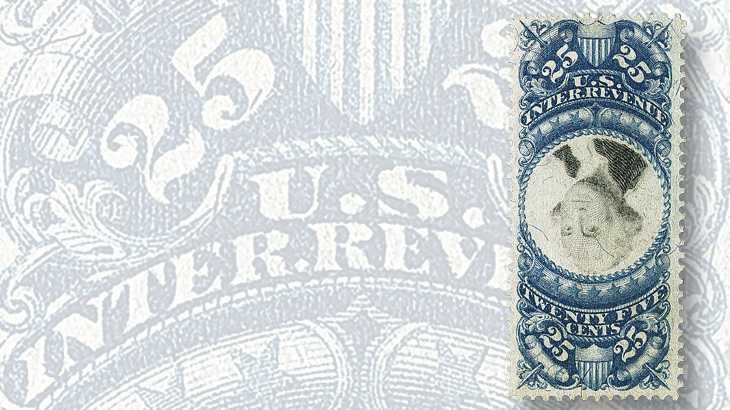 A very rare sound and unused 25¢ revenue stamp from the second issue, with George Washington’s portrait inverted, sold for $16,100 at the October sale of the Inman collection’s revenue stamps, by Robert A. Siegel. 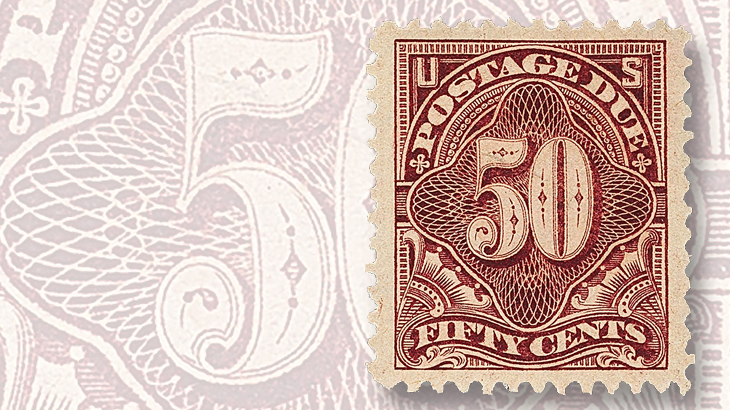 An example of the 50¢ unwatermarked postage due stamp of 1894, never hinged and with “perfect” centering, graded superb 98, brought $51,750 at the Oct. 6 Siegel sale of the Hanover collection. 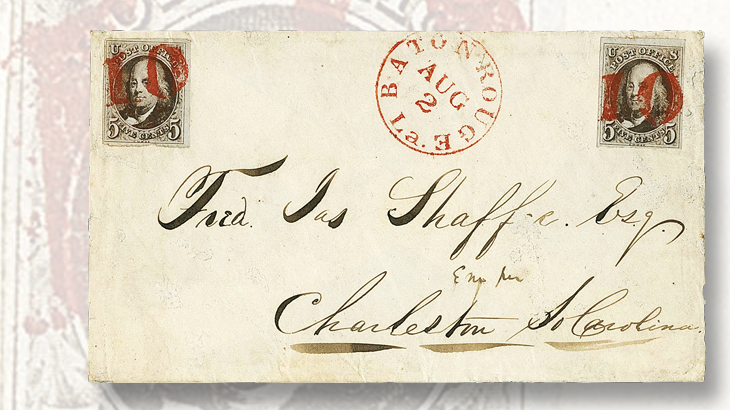 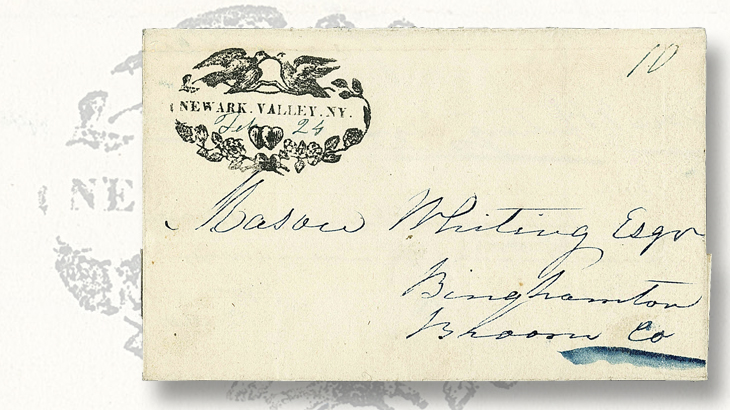 The Peter Sharrer collection of postal markings was offered by Robert A. Siegel on Oct. 5. An 1844 cover with the ornate “kissing doves” handstamp sold for $25,300.
Previous
Next

Robert A. Siegel Auction Galleries held three sales on Oct. 5-6 at their offices in New York. The third part of the Grant Inman collection, consisting of U.S. revenues, and the Peter Sharrer collection of U.S. postal markings were offered the first day, followed the next day by the second part of the Hanover collection of superb-quality 20th-century U.S. stamps.

Highlights among the Inman revenue collection included a lovely example of the first-issue $1.90 Foreign Exchange stamp, imperforate (Scott R80a). Revenue stamps were first issued during the Civil War and although many were inscribed for a particular purpose, after the initial few months of use they could be used interchangeably.

The $1.90 denomination was issued only with the “Foreign Exchange” inscription, and the imperforate variety is highly sought after.

The “superb” example in the Siegel sale, with good margins and rich color, is canceled only by a circular dated handstamp from early in the stamp’s period of use.

Revenues with handstamped cancels typically fetch more than those with manuscript cancels, and this example brought $21,275, including the 15 percent buyer’s premium added by Siegel to all lots.

A $1 Inland Exchange stamp with perforations only on the vertical sides (Scott R69b) was described as a “rare sound and centered” example. Boasting bright color and a manuscript cancel, it sold for $16,100.

That same price was paid for an unused 25¢ revenue from the second issue, with George Washington’s portrait inverted in its ornate blue frame (Scott R112a). This lot was the highlight of an impressive run of inverted-center revenues in the Inman collection.

Although the Scott U.S. Specialized catalog values revenues only in used condition, it notes that unused examples with original gum do exist and usually sell for more than used ones. In the case of Scott R112a, the Siegel sale catalog notes that just three of the 16 known examples are unused, and of the 16, only two are known to be sound, including the Inman example.

The top realization in the Inman revenues sale went for a splendid example of the $500 Large Persian Rug of the second-issue series. A spectacular stamp whose ornate, multicolor engraving is virtually unmatched in all of philately, it was issued in sheets of one, with marginal inscriptions to the left and right. Only four of the roughly 87 surviving examples still bear these imprint margins; the one in the Inman collection brought $40,250.

The Sharrer collection of postal markings focused on postal history, rather than stamps, and included some rare and beautiful items. An envelope from a letter mailed at Newark Valley, N.Y., in 1844 was postmarked with the distinctive “kissing doves” ornate handstamp.

“Considered by many to be one of the most beautiful handstamped markings applied to 19th century mail,” according to the Siegel catalog, the letter, additionally marked “10” in pen for the 10¢ postage rate, sold for $25,300.

A stunning 1847-issue cover bearing two 5¢ Franklin stamps (Scott 1) in the upper corners has each adhesive canceled by a bold, vivid red “10,” indicating the rate for a single-weight letter going a distance of more than 300 miles (Baton Rouge, La., to Charleston, S.C., works out to about 775 miles by horse). The cover sold for $63,250.

The Hanover collection of superb U.S. stamps included a trio of classic inverted-center errors — the famous Pan-American Exposition inverts of 1901 — in exceptional grades and condition, as well as superlative examples of the right-side-up varieties.

Like most top-graded stamps, these fetched many multiples of the catalog valuations for more ordinary examples in very fine condition.

Among the offerings of regular Pan-Am Expo series stamps was a 10¢ (Scott 299), graded superb 98 with jumbo margins and never-hinged gum, the only example to date to rate so highly. This is a stamp that, in the normal grade of very fine never hinged, is valued in the Scott U.S. Specialized catalog at just $300, rising to $7,250 for superb 98. The Hanover example fetched $21,850.

A scarce example of the 1¢ green Franklin from the fourth Bureau issue of 1922-29 was printed on rotary presses but perforated gauge 11 on a flat-plate machine (Scott 594).

Because the perforating equipment had been set up for the slightly smaller flat-plate stamps, this mismatch in the production process resulted in most stamps being very poorly centered, with perf holes touching or cutting into the design on one or more sides.

A very well-centered example in the Hanover sale, graded extremely fine 90 by the Philatelic Foundation, was dubbed “a phenomenal condition rarity.” It sold for $40,250.

Not to overlook the back of the book in the Hanover collection sale, a splendid example of the 50¢ unwatermarked postage due stamp of 1894 (Scott J37) with never-hinged gum and “perfect” centering, graded superb 98, fetched $51,750.