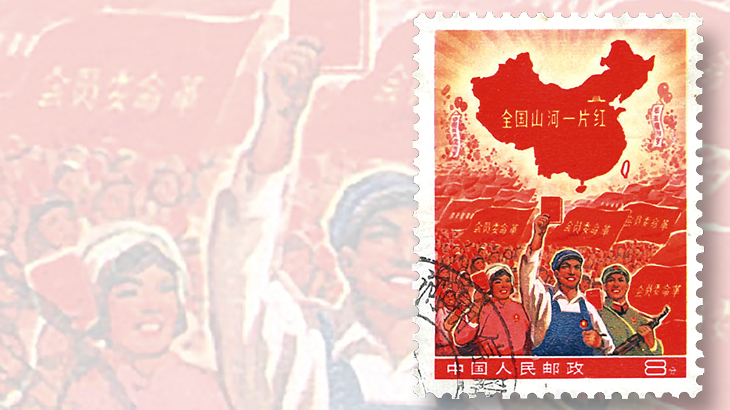 Numerous sought-after issues of the People’s Republic of China are offered in the upcoming Kelleher and Rogers sale, including two single-stamp examples of the withdrawn 1968 Whole Country is Red stamp with neat corner cancels. 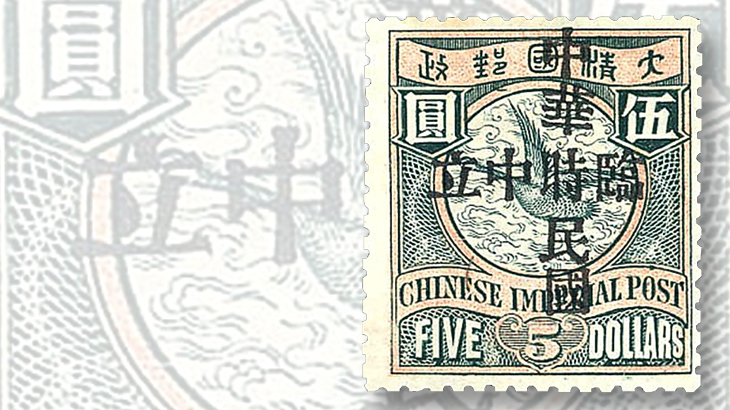 Only 52 of China’s 1912 $5 green and salmon stamp with black “provisional neutrality” overprint were issued. This example is among the rarities offered during the Nov. 5-6 Hong Kong auction of Asia
Previous
Next

A two-day sale from Kelleher and Rogers in Wan Chai, Hong Kong, will auction more than 1,100 lots of China, Hong Kong, Japan, and other Asia, with single-stamp lots, multiples, sets, collections and more, including postal history.

Hundreds of lots presented on the second day of the sale will offer material of the People’s Republic of China, including liberated areas, unified issues and collections.

The auction takes place Nov. 5-6 at the Kelleher and Rogers offices in Wan Chai on the ninth floor of the Malaysia Building, 50 Gloucester Road.

The sale opens with China collections of both stamps and covers, and continues into stamps and postal history of the municipal posts, China empire, and China republic.

Each section provides numerous significant varieties and often multiple lots of individual issues from which to choose.

There is one example offered of China’s rare 1912 $5 green and salmon stamp with black “provisional neutrality” overprint (Scott 145). The unused stamp has its original gum and is described as displaying rich vivid colors, and as one of only 52 examples issued.

The first day of the sale continues with material from Chinese provinces, foreign post offices in China, Japanese occupation of China, Taiwan, Hong Kong, Japan, and other Asia countries.

The Sunday auction session begins with more than 100 lots from People’s Republic of China liberated areas. These unusual stamps are always a treat to look through, and this sale has two die proofs of the East China 1949 Nantung print Chairman Mao issue printed on very thin tissue paper, in $2,000 and $5,000 denominations, respectively.

Selections from the People’s Republic offer some of the most sought-after commemoratives, often presented in multiple examples.

There are seven individual lots, for example, of the handsome 1958 8-fen imperforate Heroes Monument souvenir sheet (Scott 344a).

Two used examples of the very scarce 1968 8f The Whole Country is Red withdrawn stamp (Scott 999A) are offered, as well as a third that is “tied to cacheted cover on which it did not originate.” The stamp was pulled from sale shortly after it was issued because the island of Taiwan was printed white instead of red on the map in the stamp design.

The popular 1980 8f Year of the Monkey stamp with its red background (Scott 1586) appears with 10 different unused singles to bid on (some never hinged, some lightly hinged) and a neat corner margin block of four as well as a horizontal block of eight (both blocks never hinged).

Several Monkey commemorative covers are also up for bidding.

The auction lots are illustrated with full descriptions online, with online bidding options available. The auction is also posted on the Stamp Auction Network online site.