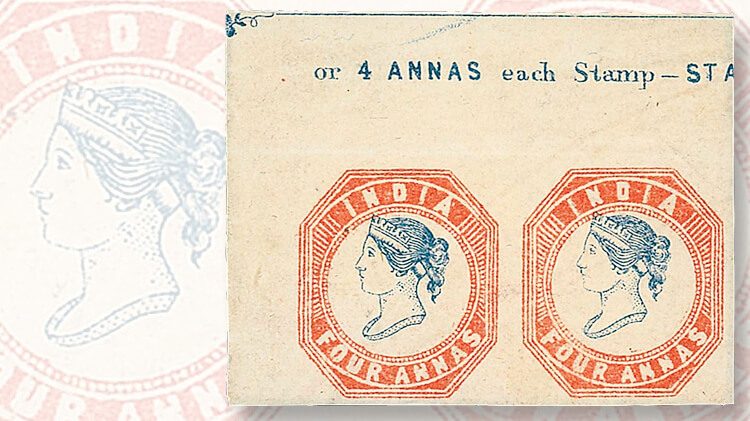 Also at the September Spink sale, a rare pair from the fourth printing of India’s first issue, with considerable original gum, sold for $44,100: twice its presale estimate. 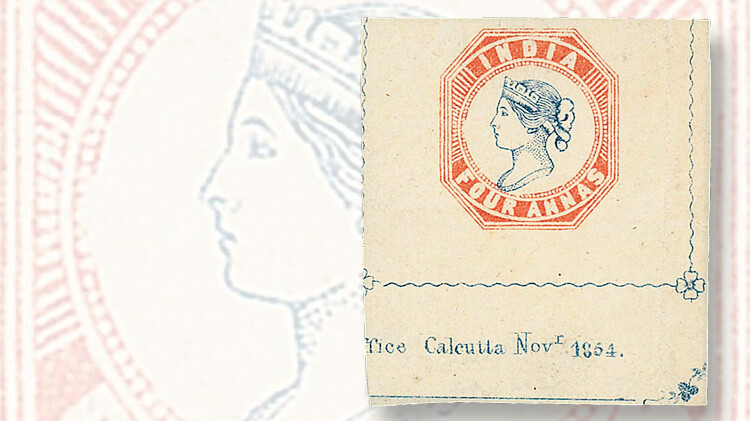 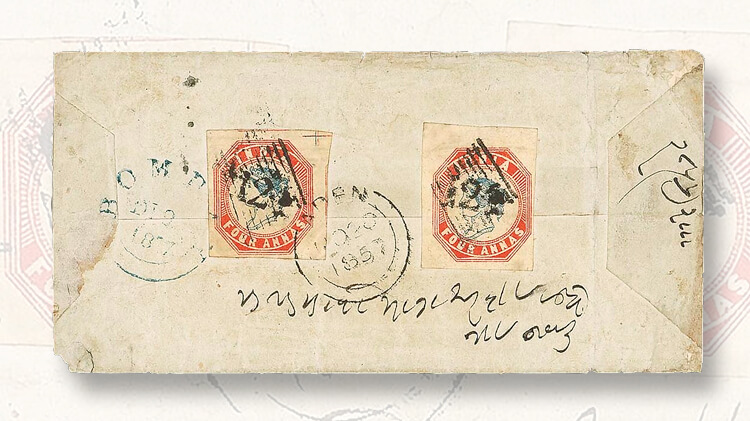 Spink’s sale of early India in September offered an 1857 cover from Aden to Bombay with two examples of the 4a fourth printing. The cover sold for $42,300.
Previous
Next

Spink held a sale at its offices in Singapore Sept. 9-10 that was devoted entirely to an advanced holding of the early stamps of India.

The country’s first issue, in 1854, consisted of simple designs showing a profile bust of Queen Victoria, the country name “India” and the denomination in words, from “half anna” to “four annas.” The stamps were printed locally and issued imperforate. While the basic stamps are not rare, specialists delve into the intricacies of the different dies and printing plates used, and stamps or covers showing the scarcer varieties command great premiums.

The bicolor octagonal 4a stamp, for example, was printed in two different plate configurations. The first had the stamps spaced far apart, with delicate framelines running between them, while the second had the stamps arranged more conventionally, without the dividing lines.

An enormous, unused corner-margin single of the first setting, showing the wiggly framelines and corner rosettes on three sides, also included part of the bottom-margin imprint of the office in Calcutta (modern Kolkata) that did the printing. Minute details identify the head, which is dark blue, as coming from the second of three dies used, and the frame, in red, as coming from the first.

A light crease hardly detracts from the beauty and rarity of the stamp, which once resided in the famous collection of Maurice Burrus. It went for triple its presale estimate, or the equivalent of $51,200, including the 20 percent buyer’s premium Spink adds to all lots.

A rare pair from the fourth printing, on which the stamps are closer together, shows the third head die and second frame die. Augmented by a large amount of original gum on the back, the upper-margin pair sold for double its estimate, or $44,100.

Two examples of the 4a fourth printing on an 1857 cover to Bombay paid the double-weight letter rate from the British colony of Aden, at the southern tip of the Arabian peninsula. Aden used stamps of India until its own first issue in 1937.

Both stamps on the native (locally made) envelope are canceled by a barred-numeral “124,” the number assigned to Aden, and one also is tied by a Nov. 20 Aden datestamp. The cover sold for $42,300.