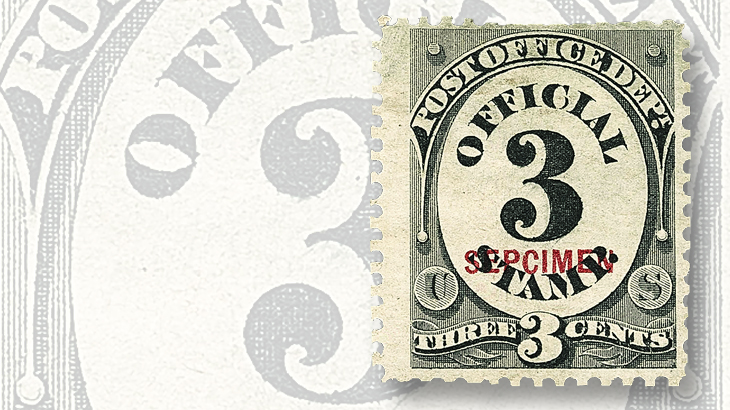 The unique example of the 3¢ Post Office Department Official with the “Sepcimen” error overprint brought $37,375 in Siegel’s sale of the Inman collection on Sept. 15. 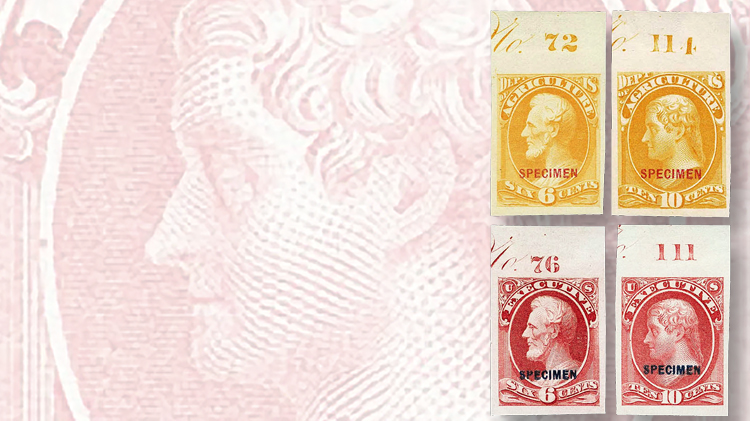 Four examples from a single lot consisting of 92 Official stamps of the 1875 reprints created for the Centennial Exhibition in Philadelphia and overprinted “Specimen.” The set was sold at the Siegel auction for $103,500. 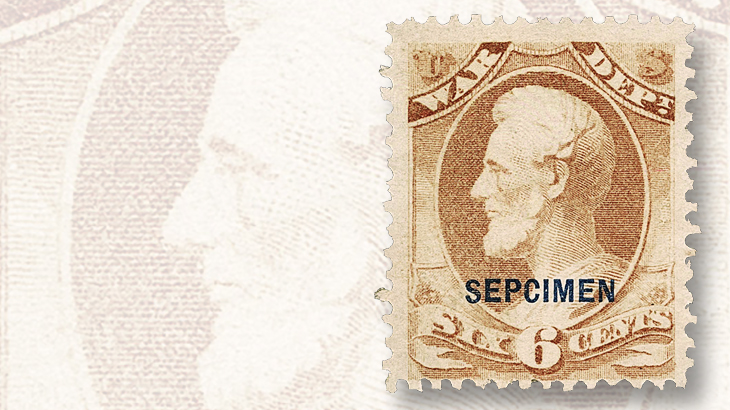 A 6¢ War Department Official with the “Sepcimen” typo, thought to be unique, went for $32,200 in Siegel’s sale of the Inman collection. 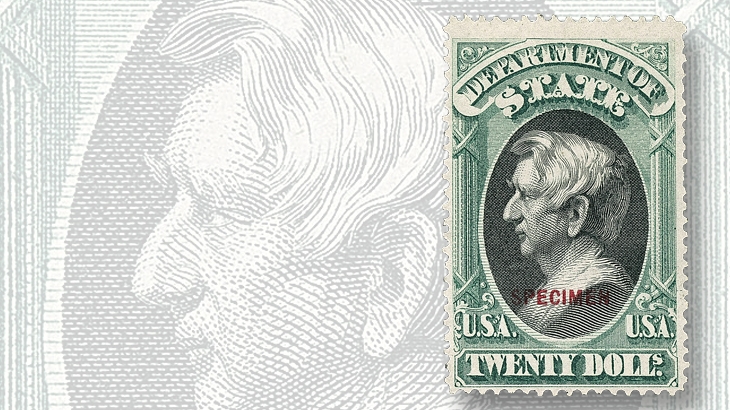 The top realization in the Sept. 15 Siegel auction of the Grant Inman collection of U.S. Official stamps was for the $20 State Department special printing. The stamp brought $172,500. The $10 State Department Official in the sale sold for $115,000.
Previous
Next

The second part of Grant Inman’s U.S. collection, featuring Officials, offered some famous gems, including a long run of “Specimen” overprints with the typographical error “Sepcimen.” Many of these were unique.

The Official stamps (used on official mail by nine executive branch government departments), along with all past and present U.S. stamps, were specially reprinted in 1875 for sale at face value by the Third Asst. Postmaster General in Washington, D.C., and for display at the Centennial Exhibition to be held the following year in Philadelphia. Because it wasn’t legal for private citizens to use Official stamps, these special printings of the Officials were issued without gum and overprinted “Specimen.”

Although it is not known how he obtained them, James Ludovic Lindsay (1847-1913), the 26th Earl of Crawford, a prolific turn-of-the-century collector, had in his possession a set of imperforate strips of five of all 92 stamps in the Official special printings. No other imperfs ever surfaced.

After Crawford’s death, the strips were cut up into pairs and three singles, most of which are today accounted for: the set of pairs was sold by Siegel in 2015; a set of singles is with the Benjamin K. Miller collection belonging to the New York Public Library; another set, minus the dollar-value State Department stamps, was last seen in a 1978 Sotheby’s sale; and the fifth set, almost all with plate numbers in the margins, was one of the highlights of the Inman collection, having been bought by him at Siegel’s auction of the Robert Zoellner collection in 1998.

All eyes were on the dollar-value State Department stamps — the only such high values among U.S. Officials — and, as expected, the top realizations of the Inman sale went to the State Department $10 and $20 special printings (Scott O70S-O71S), which brought $115,000 and $172,500, respectively.

Although official records showed that eight of the $10 and seven of the $20 State Department stamps were originally sold, just four or five of each remain accounted for today.

The unique example of the 3¢ Post Office Department Official with the “Sepcimen” error overprint (Scott O49Sa), discovered in the 1920s but not listed in the Scott U.S. Specialized catalog until 1971, brought $37,375.

A 6¢ War Department Official with the same typo in the overprint (Scott O86Sa), thought to be unique although it is theoretically possible that a second one exists, went for $32,200.

The third part of the Inman collection, featuring revenues, was offered by Siegel on Oct. 5.