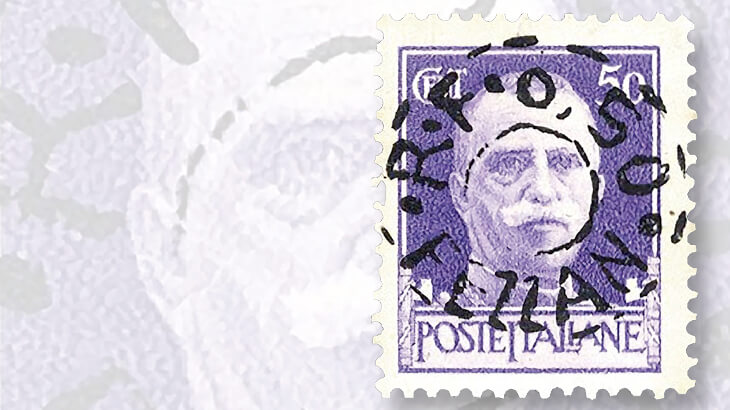 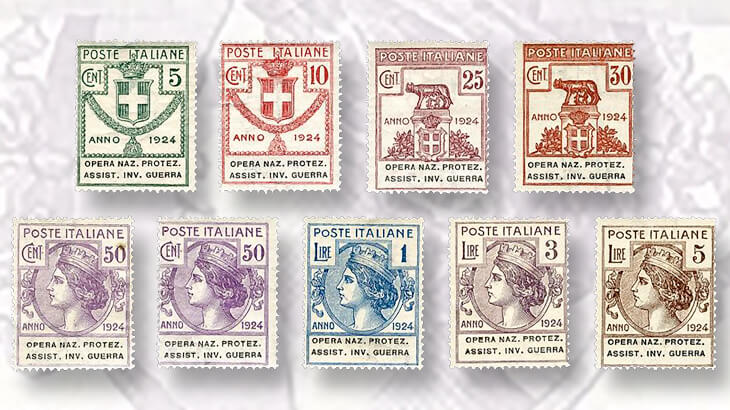 The scarcest set of a series of 1924 semiofficial stamps issued by Italy for quasi-state entities, inscribed “Opera Naz. Protez. Assist. Inv. Guerra” (National Organization for the Protection and Assistance of War Invalids), sold for $12,650 at Cherrystone’s August sale in New York.
Previous
Next

The region that today makes up the troubled North African nation of Libya was historically three territories: Tripolitania in the northwest, Cyrenaica in the east and Fezzan, a largely empty desert area, in the southwest. The former two places have familiar stamp histories under Italian, British or independent control, but the latter is less well-known.

Fezzan, with the rest of Libya, was part of the Ottoman realm and then nominally under Italian control between the world wars. In 1943, it was taken over by Free French forces from Chad, and remained under French control until it rejoined independent Libya in 1951.

Stamps of Italy and Libya were provisionally overprinted at first, although the Scott Standard catalog lists only stamps of Fezzan (at the end of Libya) beginning in 1946, when engraved stamps of typically French design were issued for the territory.

A mint Italy 50-centesimo King Victor Emmanuel III definitive, with a circular overprint reading “R.F. 0,50 Fezzan” (listed as Sassone 11 in that catalog of Italy) was described as one of fewer than 10 of the 343 originally produced to still have original gum. It sold for $8,050, including Cherrystone’s 15 percent buyer’s premium.

In 1924, Italy issued a series of semiofficial definitive stamps for quasi-state entities, including a number of libraries. Comprising eight denominations in three basic designs, with the (typically abbreviated) name of the institution imprinted in a panel at the bottom, there were a total of 77 such “enti semistatali” stamps. They are not listed by Scott, although they do appear in Sassone and other catalogs. Some are extremely hard to find.

The scarcest set of the group, inscribed “Opera Naz. Protez. Assist. Inv. Guerra” (National Organization for the Protection and Assistance of War Invalids), listed in Sassone as ES50-ES57, was offered as “fresh and fine” in mint never-hinged condition. It sold for $12,650.