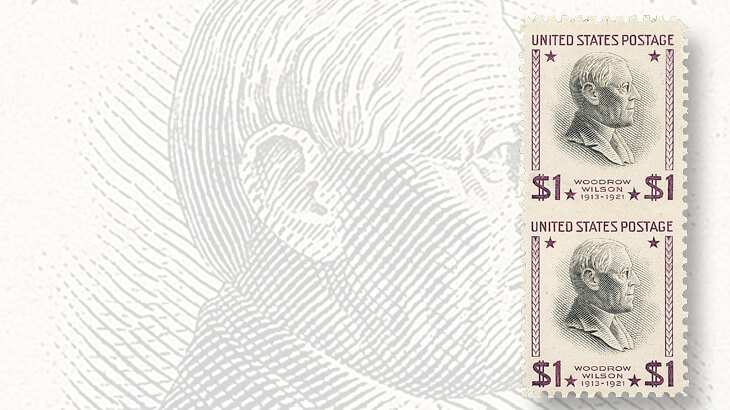 A vertical pair, imperforate between of the $1 Woodrow Wilson stamp was offered in late July by Siegel Auction Galleries. One of reportedly only 10 such pairs known, it sold for $23,000, more than twice the catalog value. 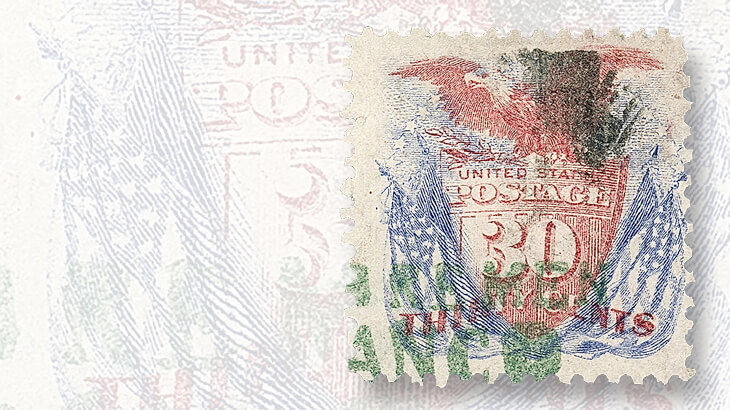 In late July, Robert A. Siegel Auction Galleries offered an 1869 30¢ Shield, Eagle and Flags stamp struck with a German postmark in green, said to be one of only two or three known. It surpassed its catalog value, selling for $10,925. 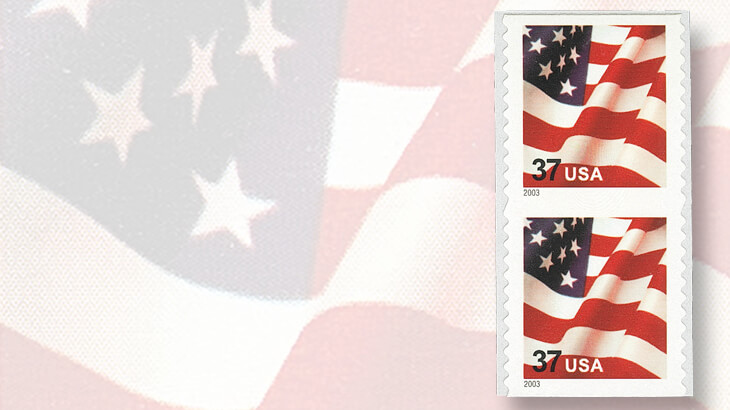 New to the auction marketplace, a vertical pair of unused, apparently horizontally unslit-between 37¢ flag stamps of 2003 sold for $690 at the Siegel Auction Galleries sale in late July.
Previous
Next

Robert A. Siegel Auction Galleries offered U.S. stamps in New York on July 26-27, including items from a gold award-winning collection of colored cancels on the 1869 Pictorial issue.

An otherwise unexceptional example of the 30¢ ultramarine and carmine Shield, Eagle and Flags stamp of 1869 (Scott 121) stood out for one reason: It is struck with a German postmark in green, said to be one of just two or three examples of this stamp known with this eye-catching result.

This stamp is listed in the Scott U.S. Specialized catalog at $450 with a $7,500 bonus for a green cancel, and the result in the Siegel sale surpassed even that: The stamp was hammered down for $9,500, or $10,925 with the 15 percent buyer’s premium levied by Siegel on all lots.

Among more modern issues offered by Siegel were a couple of imperforate between errors not often seen.

A vertical pair, imperforate between, of the $1 Woodrow Wilson stamp (Scott 832f) was said to be the first example the firm has offered in almost half a century. Originating from the 1954 printing of this definitive, there are reportedly only 10 imperforate between pairs known of the $1 Wilson.

The conjoined twins, described as a “key item” for collectors and exhibitors of the Prexies, sold for $23,000, far outstripping the pair’s $8,500 Scott U.S. Specialized catalog value.

A similar error on a much newer stamp, the 37¢ Flag stamp of 2003 with gauge-10¼ serpentine die cuts vertically (Scott 3632A), is so novel that the Scott Catalogue of Errors on U.S. Postage Stamps by Stephen R. Datz does not list it. The Scott U.S. Specialized catalog lists a different “die cutting omitted, pair” error as 3632Af, valued at $250.

A pair of unused examples of Scott 3632A, apparently horizontally unslit between from two coils, still adhering to their backing paper, sold for $690. The Siegel firm said they were “unable to find another example offered at auction.”