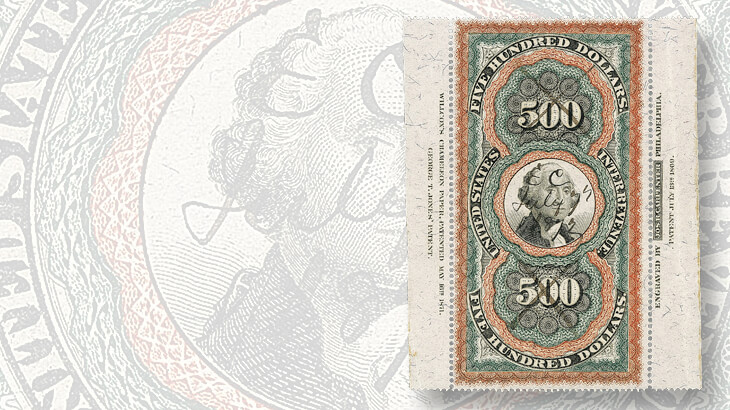 The Large Persian Rug, a $500 second-issue revenue stamp printed in three colors, is rarely seen with sheet margins and full imprints. This example will be auctioned by Siegel Oct. 5. 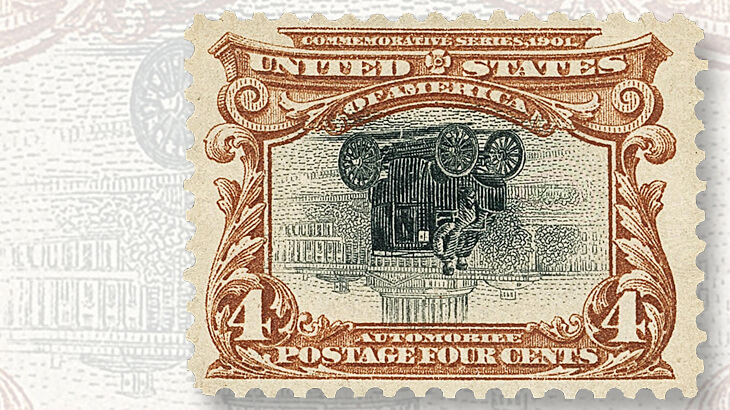 This example of the 1901 4¢ Pan-American Automobile stamp with black center inverted will be offered at auction Oct. 6 by Robert A. Siegel.
Previous
Next

Robert A. Siegel Auctions of New York City will conduct three distinct sales Oct. 5-6 in the firm’s galleries on the fourth floor at 60 E. 56th St.

The Peter Sharrer collection of United States classic postal markings will be presented at unreserved auction Wednesday morning at 10:30.

Wednesday afternoon at 1:30 the third part of the Grant Inman collection will be on the block, offering first-, second- and third-issue revenue stamps.

The next day will bring the Hanover collection of superb quality 20th-century U.S. stamps and back-of-the-book issues in two sessions, beginning at 10:30 a.m. and resuming at 1:30 p.m.

The Hanover collection sale on Thursday opens with single lots offering one each of the six bicolor engraved stamps issued May 1, 1901, for the Pan-American Exposition opening that day in Buffalo, N.Y. (Scott 294-299).

As Siegel explains in a marvelous essay describing the set, “The Pan-American stamps depict images capturing new concepts and ideas for a new century — an automobile, train, fast steamships, and a man-made canal.” The essay can be read online by downloading the PDF catalog from www.siegelauctions.com.

With denominations ranging from only 1¢ to 10¢, the stamps were popular with collectors of the day. Discerning collectors looking for these stamps today keep an eye out for top quality and exceptional centering, and those characteristics are present in each of the six stamps on offer. All are mint, never hinged, and have achieved grades of Superb 98, with the two ships — the 1¢ Fast Lake Navigation stamp and the 10¢ Fast Ocean Navigation stamp — ranking as Superb 98 Jumbo with respective Professional Stamp Experts graded certificates.

Just one example of the 1¢ stamp is known to grade even higher, but the 10¢ has the highest grade and is the only stamp of its kind to achieve it.

The stamps are each listed with their Scott catalog values for never-hinged stamps grading Very Fine, but the descriptions also provide the appropriately higher Stamp Market Quarterly values for the better grades these stamps represent.

After these first six lots, the auction offers three more Pan-Americans: one each of the inverts known for the three lower denomination stamps.

The set is described by Siegel as the finest-quality set it has ever seen in one collection. The stamps are graded by PSE as XF 90 for the 1¢ invert, and Superb 98 for the 2¢, and by the Philatelic Foundation as Extremely Fine 90 for the 4¢.

The meticulous care shown by the collection owner in selecting examples of the Pan-Americans continues with the rest of the stamps in this nearly 300-lot sale.

Almost all are mint, never hinged, and coils are presented as line pairs for the most part.

An exception is the 3¢ deep violet Type I George Washington coil of 1911, commonly known as the Orangeburg Coil, which is used and postmarked, as all but one of the known examples are. The used stamp is valued by Scott at $10,500, but this example, Siegel notes, has the added attributes of choice centering with huge margins and deep rich color.

“This may well be the finest sound example of the 3-cent Orangeburg coil in existence,” Siegel adds.

The Wednesday morning auction of the Peter Sharrer collection offers 107 lots of postal history with some of the more captivating postal markings of the 19th century, on prestamp as well as stamped mail.

Among the highlights is an 1851 folded letter franked with the right half of an 1847 10¢ black George Washington (Scott 2b) tied by a bright red grid cancel, postmarked Walpole, N.H., and addressed to Cambridge, Mass.

From St. Johnsbury, Vt., comes an 1848 folded cover to Troy, N.Y., struck with the red Scarab fancy cancel, one of five such covers franked with the 1847 5¢ Benjamin Franklin, this stamp described by Siegel as grayish brown (Scott 1a).

The Inman collection on Wednesday afternoon provides a selection from the first, second and third issues of U.S. revenue stamps with a few remarkable rarities, such as the 1863 first-issue imperforate 3¢ Playing Card (Scott R17a), which is valued by Scott at $40,000, with the dollar amount in italics to indicate that accurately determining the value can be difficult.

The auction also offers two examples of the beautiful second-issue tricolor stamp known as the Large Persian Rug, and one of the two includes sheet margins with full imprints at each side and original gum. It’s one of just four reported with sheet margins and imprints, according to Siegel.

All three auctions can be viewed online, and online bidding options are available.