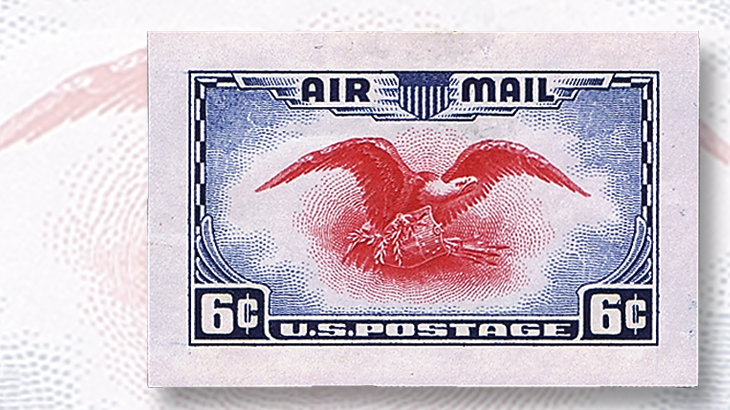 Harmers International will offer this small die proof for the United States bicolored 6¢ Eagle airmail stamp of 1938 at its May 12 auction. 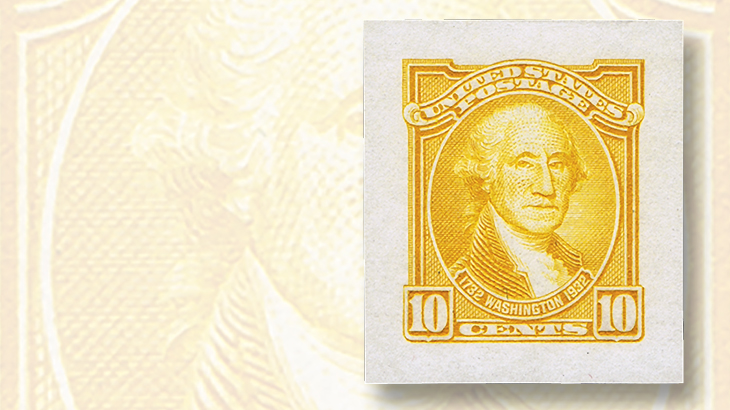 The 10¢ yellow small die proof of the 1932 Washington Bicentennial issue is one of a set of 12 small die proofs being auctioned by Harmers International. Only four sets are known to exist. 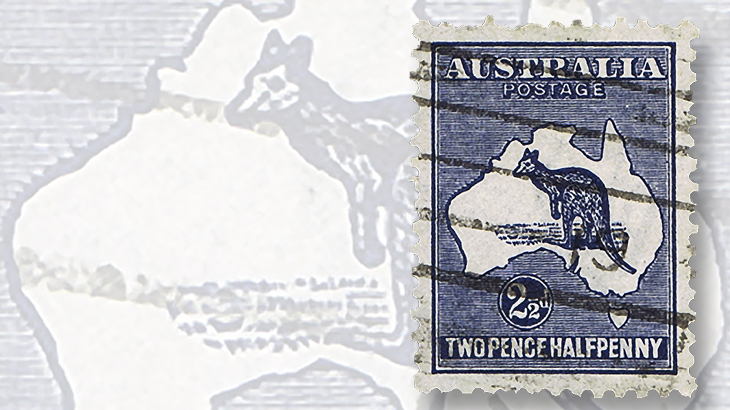 Only about 15 examples of the 1917 Australia 2½-penny Kangaroo and Map stamp exist with the “1” missing from the fraction, including this one slated for auction May 12 by Harmers International. Once thought to be fake, it was certified as genuine in 2015. 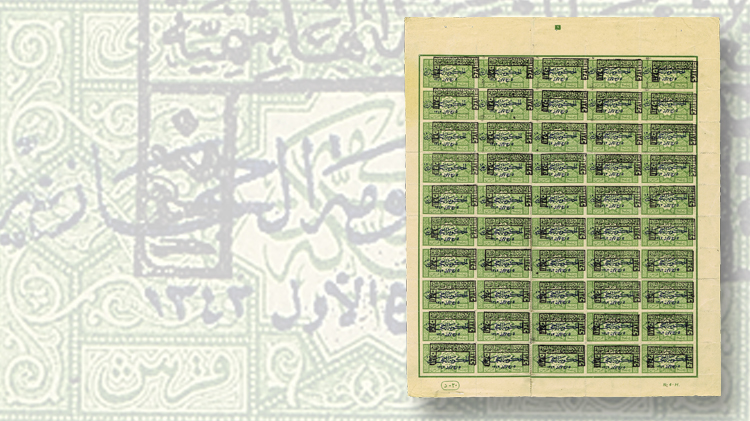 This stunning sheet of ¼-piaster stamps of Saudi Arabia will be brought to the auction block May 12. The sheet was printed in Cairo in 1916-17 and provisionally overprinted twice: first with a rectangular horseshoe-shaped overprint of 1922, and then with a two-line blue inscription for use in Jedda in 1924. 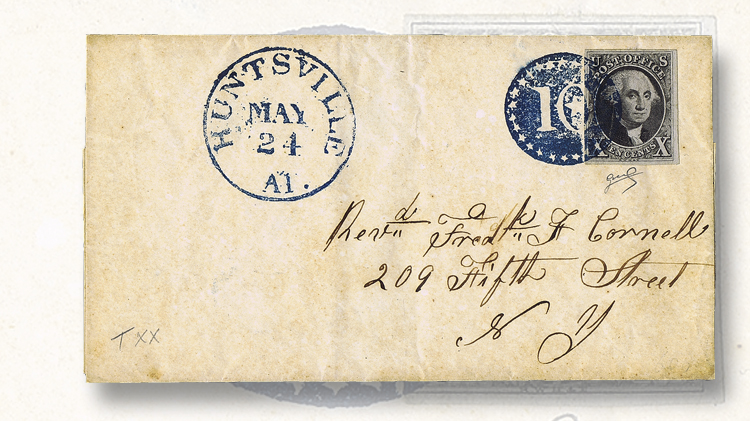 Both the dark indigo negative “10” in a circle of stars and large “Huntsville, Al./May 24” circular datestamp on this U.S. 1847 10¢ Washington cover are fake. The cover will be offered at the May 12 Harmers International sale. 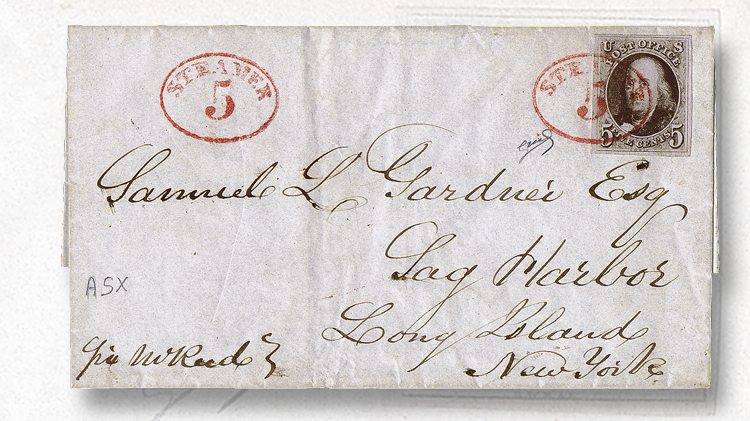 An unscrupulous person augmented this cover with a pair of red oval “Steamer 5” handstamps, one of which “ties” the United States 5¢ 1847 stamp. The cover will be auctioned by Harmers International in New York May 12.
Previous
Next

There is nothing in philately Keith Harmer loves more than a good fake.

“Forgeries are cool,” he explained in a recent interview. “And the coolest part is figuring out how the person did it. They had to have the materials and the skills, but they also had to have the knowledge.”

Philatelic experts likewise draw on their own knowledge, experience and reference materials to determine whether an item is a forgery. Usually, the game will be given away by some lapse in the forger’s knowledge of philately or postal history: A faker of stamp overprints uses the wrong font or ink, or a fabricator of postal history uses the wrong postal rate or marking.

But Harmer’s greatest thrill comes from flipping the script.

“The best thing about collecting forgeries is when you make a mistake,” he said. Figuring out that something thought to be fake is actually real can be fun — and profitable.

Harmer likes to tell the story of a notorious 19th century United States cover he brought to the Philatelic Foundation in New York some years ago. The cover was widely assumed to be a forgery because a well-respected postal historian had declared that the stamps made up a nonexistent rate.

But Harmer had done some additional research and discovered that such a rate had, in fact, existed, albeit in obscurity. By partially lifting each stamp, Harmer was able to show that each one properly belonged on the envelope — none had been regummed and added subsequently. As the evidence mounted, only one conclusion could be drawn: The cover was authentic. It received a certificate from the Foundation, and Harmer auctioned it for a handsome profit.

A similar story accompanies one of the headline items in the auction being held by his firm, Harmers International, at the Collectors Club in New York on May 12.

One of the most popular rarities in Australian philately is the 2½-penny Kangaroo and Map stamp of 1917 (Scott 46a, Stanley Gibbons 36ba). The numeral is normally white on a dark blue background, but when the typographic printing plate became clogged, the numeral filled in and disappeared. It was soon corrected, and only about 15 examples of the misprint survive.

Obviously, this type of error is rather easy to fake: A dab of ink or paint of exactly the right shade of blue could be used to fill in the 1 on a normal example.

The owner of the Scott 46a in Harmer’s sale had acquired it as a presumed fake. But the stamp had never been submitted for examination by a knowledgeable expert.

When the stamp came to Harmer, he ran it through some do-it-yourself tests: dipping it in watermark fluid, and looking at it under high magnification and ultraviolet light. Such methods will reveal most fakery, but none was evident in this case. So Harmer suggested sending it to the Royal Philatelic Society of Victoria, Australia, for a formal opinion. The experts there spent a year examining it, and in 2015 certified it as a genuine, previously unknown example of the error.

Well-centered and sound, the stamp is listed in the Scott Classic Specialized Catalog of Stamps and Covers 1840-1940 with a value in used condition of $50,000.

The Harmers International sale includes a number of actual forgeries. Anyone wishing to augment their collection of U.S. 1847 issues with some interesting forged covers will find a number of intriguing creations.

Oftentimes, such forgeries begin with a genuine stamp on a genuine cover, to which some artful enhancement has been made. Seasoned collectors know to be skeptical of elements like special postmarks, which, if genuine, would be worth a nice premium. Having a few known fakes on hand helps when trying to make judgments about others.

A 5¢ Franklin (Scott 1) on a cover addressed to one Samuel Gardner in Sag Harbor, N.Y., is from a well-known hoard of correspondence that came on the philatelic market many years ago. Alas, at some point an unscrupulous person augmented the cover with a pair of red oval “Steamer 5” handstamps, one of which “ties” the 5¢ stamp.

If real, such markings would be highly desirable. Despite the endorsement on the reverse of longtime dealer (and known philatelic fraudster) John A. Fox, the markings are fake: According to the accompanying “bad cert” from the Philatelic Foundation, their composition and color does not match markings known to be authentic.

Fox also vouched for an 1847 cover bearing a 10¢ Washington (Scott 2) and addressed to New York. A dramatic, negative “10” in a circle of stars and a large “Huntsville, Al. / May 24” circular datestamp are both struck in dark indigo; both are fake.

Despite Harmer’s delight in forgeries, the bulk of the offerings in the May 12 sale are unquestionably genuine. An extensive run of 20th century United States essays and die proofs includes a number of rarely seen items.

While 19th century die proofs are not uncommon, having been made by the privately owned engraving and printing companies as sales samples, the same cannot be said for 20th century issues produced by the Bureau of Engraving and Printing. In many cases, fewer than five examples are known, and often less.

A splendid set of small die proofs of the 1932 Washington Bicentennial issue showing all 12 stamps in their issued colors, from the ½¢ brown to the 10¢ yellow (Scott 704P2-715P2), is thought to be one of just four sets known.

The set is valued in the Scott Specialized Catalogue of United States Stamps and Covers at $10,250.

A small die proof for the bicolored 6¢ Eagle airmail stamp of 1938 (Scott C23P2) is very seldom seen, according to Harmer, who said he thought its Scott value of $2,750 could turn out to be low.

The kingdoms of Hejaz and Nejd were unified in the 1920s to form modern Saudi Arabia, after a period of upheaval that made stamp production difficult. A series of six stamps with beautifully ornate, Islamic designs were printed in Cairo in 1916-17 and provisionally overprinted for most of the following decade.

The sheets offered by Harmers are of the ¼-piaster and 2pi stamps, each overprinted twice, first with a rectangular, horseshoe-shaped overprint of 1922 and then with a two-line blue inscription for use in Jedda in 1924 (Scott L70, L73). They carry estimates of £6,500 and £9,000, respectively.

Both sheets of 50 are largely never hinged, with just 10 stamps of the ¼pi sheet hinged for reinforcement. The 2pi sheet is split into two 25-stamp pieces.

Harmers International adds a buyer’s commission of 18 percent to all lots sold. Bidders should read the terms and conditions before placing bids. For more information, call 212-532-3700 or shoot an email to info@harmersinternational.com.