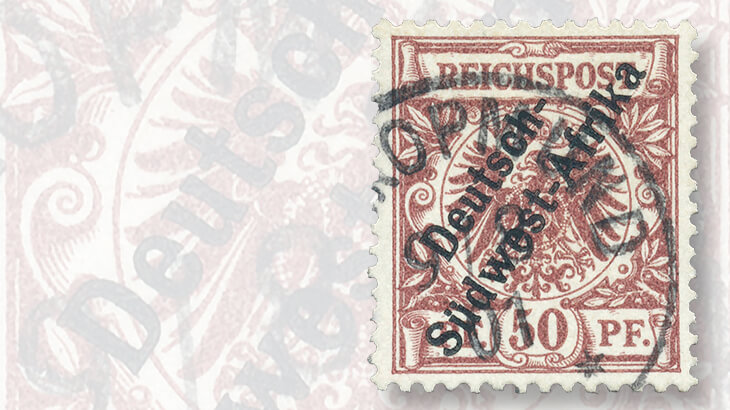 The overprint on this German Southwest Africa 1897 50-pfennig stamp spells the name of the colony with two hyphens (Deutsch-Sudwest-Afrika). Gaertner, who described it as a “great colonial rarity,” sold it for $21,800. 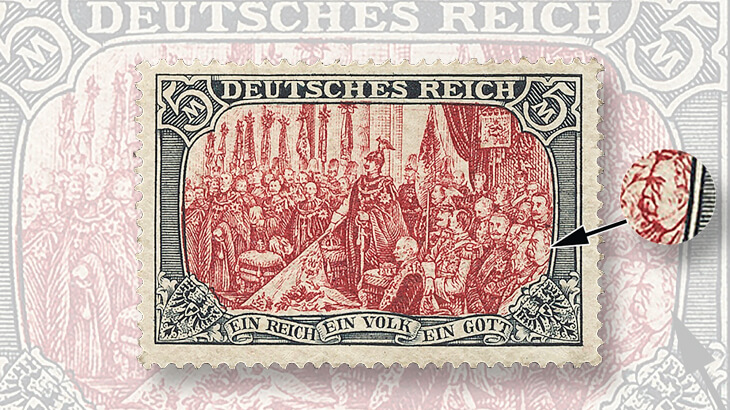 Germany stamps and postal history were abundantly represented at the Gaertner auction. One of the stamp highlights, which realized $13,400, was this variety of the 1902 5-mark stamp depicting Kaiser Wilhelm II. The arrow points out a key feature of this v 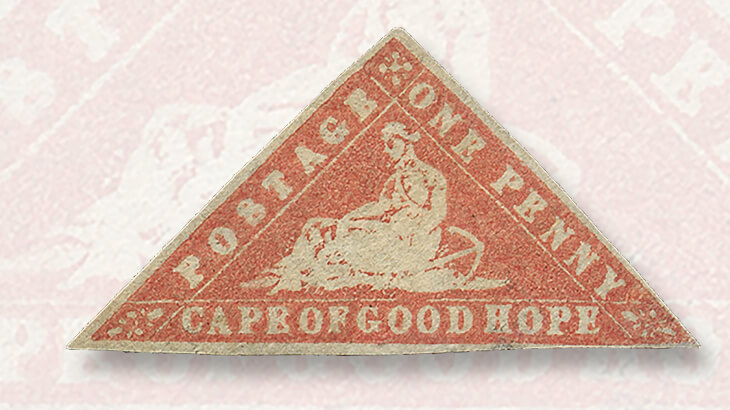 This scarce, unused example of the so-called 1d brick-red “woodblock,” the local printing of Cape of Good Hope triangular stamps of 1861, fetched $23,800 at the Gaertner sale. 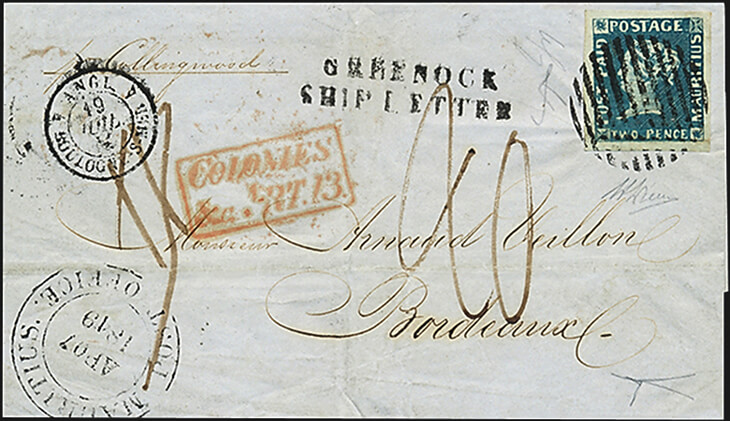 The Feb. 21-24 Christoph Gaertner auction near Stuttgart, Germany, served up some splendid postal history, including this 1849 folded letter from Mauritius to France franked with a rare earliest-impression example of the 2-penny blue “Post Paid” stamp. It
Previous
Next

The firm of Christoph Gaertner held another big sale Feb. 21-24 at their headquarters in Bietigheim-Bissingen, just north of Stuttgart, Germany.

The auction of worldwide stamps and postal history was previewed in a Linn’s article posted online Jan. 20.

Among the leading items was an early cover from the Indian Ocean colony of Mauritius to Bordeaux, France.

The letter, mailed in Port Louis April 4, 1849, was carried by the Royal Navy battleship HMS Collingwood to Greenock, Scotland, then down to England and across to France, arriving July 21.

What makes this cover special is its stamp: an earliest impression, and therefore deeply colored and most sharply detailed, example of the 2-penny blue “Post Paid” (Scott 4), with huge, even margins and a crisp barred-circle postmark.

Only four covers are reported with this desirable stamp from one of the most sought-after of the classic stamp-issuing countries. Not surprisingly, it sold for the equivalent of $99,100.

A scarce, unused example of the so-called 1d brick-red “woodblock,” the local printing of Cape of Good Hope triangular stamps of 1861 (Scott 7b), fetched $23,800.

Among German issues of interest to specialized collectors was a mixed-type example of the 5-mark Wilhelm II Speaking at Empire’s 25th Anniversary Celebration stamp of 1902 (Scott 78), which is pictured below. This top denomination of the definitive (regular-issue) series was printed in two colors: deep carmine and greenish black.

The “Germania” definitive series and its pictorial high values, including the 5m stamp, was first issued in 1900, inscribed “Reichspost.” The series was reissued in 1902 inscribed “Deutsches Reich,” fulfilling the Universal Postal Union requirement that all nations (except Great Britain) show their country’s name on their stamps.

The vignette was also modified slightly. On the first version of the 5m stamp, the ear of the mustachioed man standing at far right (said to be a fellow named Boetticher) is clearly visible, but in the second his ear is cut off.

On a small quantity, apparently, the old 1900 vignette was mismatched with the new 1902 frame. The Michel catalog, published in Germany, lists this combination type as No. 81Z. The well centered, mint example offered by Gaertner sold for $13,400.

A stamp from German Southwest Africa, remarkable for bearing an authentic cancel applied in the colony despite not having been officially issued in the colony, was chased by several bidders.

The overprint on the 1897 50-pfennig stamp (Scott 6) spells the name of the colony with two hyphens (Deutsch-Sudwest-Afrika); a subsequent issue in 1899 eliminates the second hyphen.

Presumably, a few examples of the earlier version were presented to officials in the colony or taken there privately from Berlin, and then postally used.

Several certificates attest to the authenticity of the 1901 Swakopmund postmark. The well-centered stamp, described by Gaertner as a “grosse Kolonial-Raritat” (great colonial rarity), sold for $21,800.

(Other items featured in the Linn’s preview of the Gaertner sale did not find buyers.)