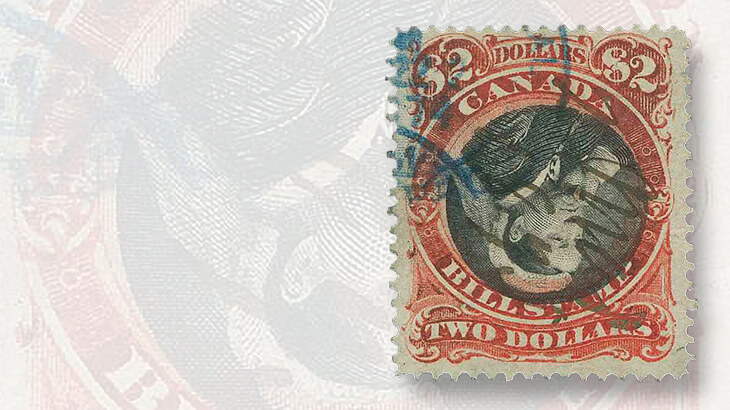 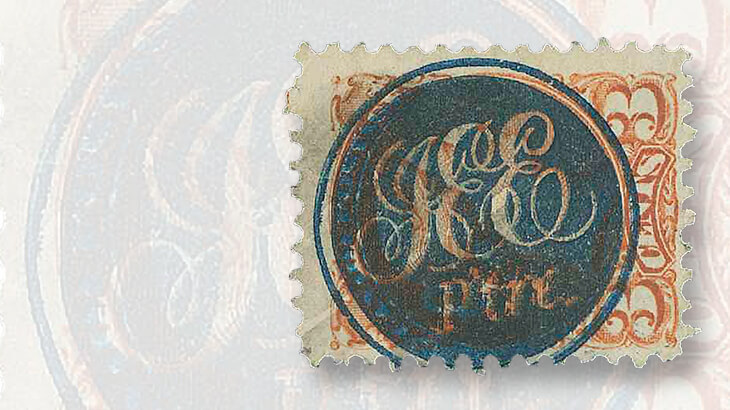 One of the more impressive items in the Eastern sale was this example of a common 3¢ Small Queen stamp bearing a heavy, dark blue circle with the negative, cursive initials JEE and the abbreviation “P’tre.” It went for $560.

One outstanding item in the Feb. 25 Eastern auction was this rare strip of three of an early 6-penny stamp showing Britain’s Prince Albert. Once a part of the John E. DuPont collection, it realized $6,900. 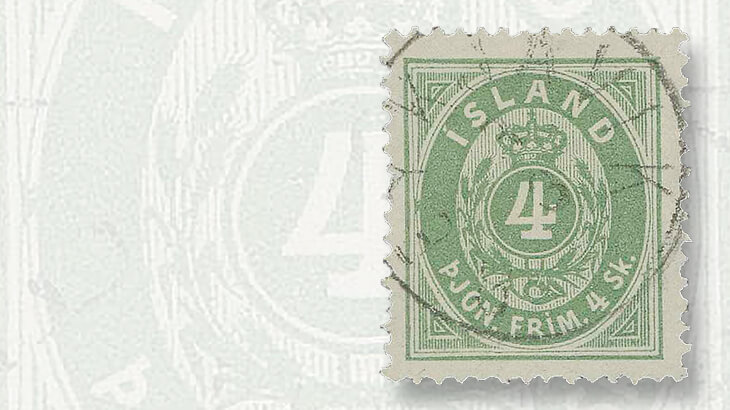 This used, well-centered example of the Iceland 4-skilling Official perforated 14x13½, bearing a socked-on-the-nose, sans-serif Reykjavik postmark, sold for $3,675 Feb. 25 at the Eastern auction in Halifax. 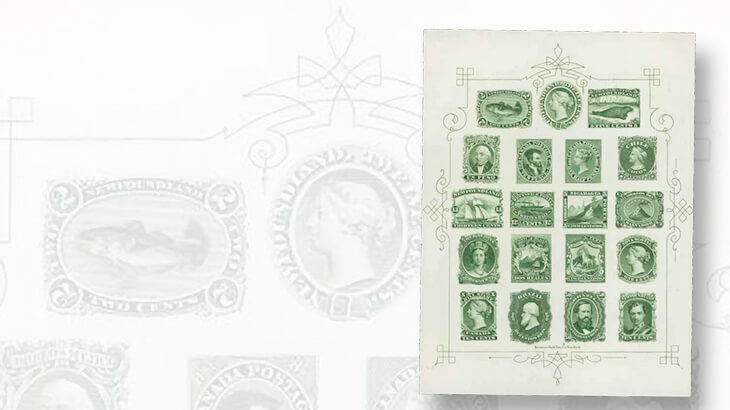 Eastern Auctions’ Feb. 25 sale in Halifax, Nova Scotia, included this rare intact 1868 American Bank Note Co. composite proof sheet showing the designs of 19 stamps from 11 countries. The sheet went to a new home for about US$12,500.
Previous
Next

Among the more eagerly anticipated lots was a composite proof sheet dating to 1868, showing the designs of 19 stamps from 11 nations, all engraved and printed by the American Bank Note Co. of New York. The sheet was produced as a sales promotion, used by the firm to show off its capabilities.

At the time, many governments across North America and South America turned to the expertise of U.S. bank note producers to help ensure the security of their stamps, and firms such ABN had a long roster of clients, as demonstrated by this proof sheet.

Printed from the original dies in a deep gray-green color, an intact sheet is now seldom seen. Most have long since been cut up into individual die proofs by collectors of one or more of the countries represented: Newfoundland, New Brunswick, Nova Scotia, Canada, Mexico, Chile, Brazil, Nicaragua, El Salvador, Costa Rica, and Peru.

The sheet went to a new home for about US$12,500, including the 15 percent buyer’s premium charged by Eastern on all lots.

As usual, the Eastern sale was strong in Canada. One outstanding item was a rare strip of three of an early 6-penny stamp showing Britain’s Prince Albert. It is shown in the image below.

Telling them apart can sometimes be hard, although the shade of color can help the identification: certain hues only appear on certain papers.

The 6d stamp in reddish purple on very thick, soft wove paper (Scott 10) is one of the more distinctive.

Few multiples of this scarce stamp have survived. According to Eastern, the largest is a strip of three, and only three of those are known.

The strip in their sale, accompanied by the small piece of a letter to which it was once attached, has margins all around and a large manuscript “X” canceling each stamp.

The trio, heralded as a “stunning showpiece” whose provenance includes the collection of the late John E. DuPont, sold for $6,900.

The sale included a range of Canada fancy cancels, the sometimes whimsical creations used by local postmasters to obliterate stamps in the 19th century before mechanization led to standardized postmarks.

One of the more impressive was example of a common 3¢ Small Queen stamp bearing a heavy, dark blue circle with the negative, cursive initials JEE and the abbreviation “P’tre” (possibly the French “Proprietaire,” or proprietor). It went for $560.

A used $2 bill stamp, from Canada’s third revenue issue, with a black portrait of Queen Victoria inverted in its red frame (Van Dam FB53a) was described as “remarkably well centered” and free of the faults that are typical for these stamps. It brought $6,050.

Among worldwide lots was an elusive early official stamp of Iceland. Until 1944, the North Atlantic island was a Danish dependency.

Its first stamps, issued in 1873, are identical in design to those of Denmark: a numeral in an oval with arabesques in the corners. The wording in the oval is also the same, but with a twist.

Regular postage stamps are inscribed “Postfrim.” (abbreviation for “Postage stamp”). Stamps for Official use are worded “Island/Þjon. Frim.” (short for “Official stamp” — the first letter resembles a “p” but is in fact an Icelandic “thorn” pronounced “th”). The Official stamps’ colors also differ from those of the regular issue.

A used, well-centered example of the 4-skilling Official perforated 14x13½ (Scott O1), bearing a socked-on-the-nose, sans-serif Reykjavik postmark, stood out as an especially nice example of this elusive stamp. It sold for $3,675.