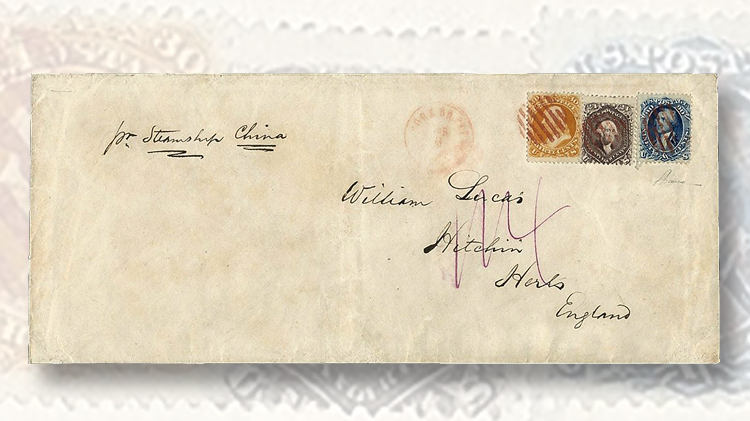 A rare three-color franking of stamps from the 1861-62 United States issue appears on this letter mailed to Hitchin, England. It will be offered in the Sept. 1-2 Auction Galleries Hamburg sale.

Auction Galleries Hamburg in Hamburg, Germany, has a two-day sale scheduled Sept. 1-2 featuring German and worldwide stamps and postal history, including material from the United States.

A featured cover in this auction is a three-color franking on an 1862 letter from New York to Hitchin, Hertfordshire, England.

Each stamp is struck with a mute red barred cancel, and the front of the cover is additionally struck by a red circular New York “BR. PKT.” (British packet) marking to the left of the stamps. An added manuscript “per Steamer China” appears on the front, and there also is a handsome circular black Hitchin receiving postmark dated “AP 23 62” on the reverse.

A 2001 certificate from expertizer Enzo Diena of Rome accompanies the letter, with the expertizer’s comments (in Italian) describing what Auction Galleries Hamburg identifies as an insignificant fault on the 90¢ stamp (“il francobollo da 90¢ e leggermente abraso”). The other two stamps are identified by Diena as “perfetti” (perfect). The auction gallery also notes that the cover was cleaned, and describes it as an “extraordinary rarity.”

The cover is listed by Auction Galleries Hamburg with a starting bid of €6,000 (approximately $7,090).

The Scott Specialized Catalogue of United States Stamps and Covers values the 90¢ blue on cover at $25,000, with the value listed in italics, signifying a difficult-to-value item.

The auction presents a particularly strong selection of World War II German occupation issues and German field-post stamps, from a large collection that has been broken up into more than 500 single lots.

The German occupation of Montenegro during World War II resulted in 35 major varieties listed in the Scott Standard Postage Stamp Catalogue. The same number (with additional minor varieties) are identified in the German-language Michel Deutschland-Spezial catalog.

A complete set of the major varieties is offered in mint condition, including the key stamp, the 10-lira lake on rose buff overprinted airmail stamp (Scott 3NC5), which alone is valued by Scott at $3,200 unused. Just the set of five airmail stamps, never hinged, carries a Scott value of $6,250. Many of the Michel-listed minor varieties also are included in this lot. This expanded set is offered with a starting bid of €2,500 (approximately $2,950).

An extensive selection of German states and Austria also is on offer.