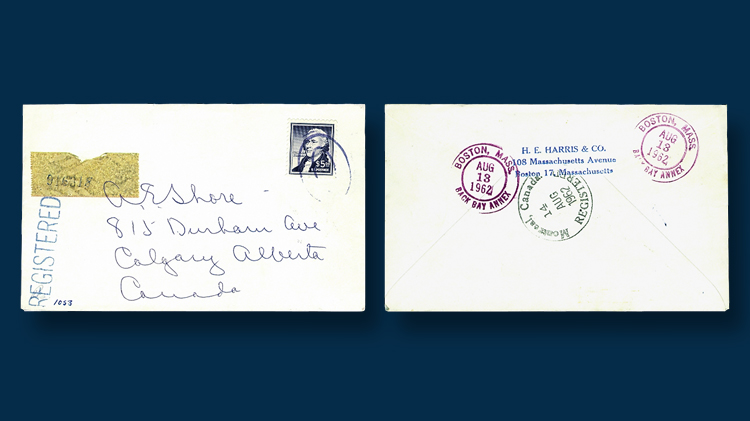 About three weeks before the $5 Liberty solo cover to Switzerland sold for more than $5,000, this 1962 registered $5 Liberty solo use to Calgary, Alberta, attracted just one bid on eBay, selling for a modest $400. The sender was well-known Boston stamp dealer H.E. Harris & Co., as shown on the back of the cover. 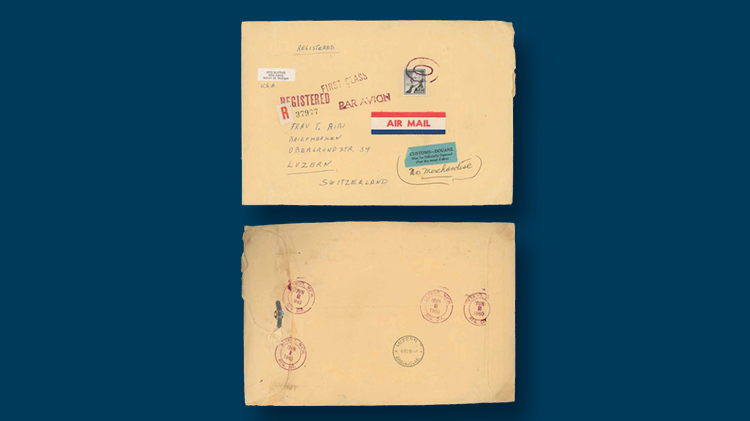 This 1960 international registered cover, franked with a single United States $5 Alexander Hamilton stamp (Scott 1053), sold for $5,550 Dec. 1 on eBay. The winning bidder outlasted five other collectors to acquire it for his display-class exhibit on the life and times of the man shown on the stamp. The cover was sent from Detroit, Mich., to Lucerne, Switzerland. Backstamps show the cover reached its destination in four days.
Previous
Next

A registered cover franked with a single United States $5 Alexander Hamilton stamp sent in 1960 from Detroit, Mich., to Lucerne, Switzerland, sold for $5,550 Dec. 1 on eBay.

Six bidders placed a total of 49 bids for the cover bearing the top denomination (Scott 1053) in the 1954-73 Liberty series of definitive (regular-issue) stamps.

A single mute double-outline oval handstamp ties the stamp to the cover. Handstamps on the back indicate the parcel was mailed from Detroit June 2, 1960, and arrived in Lucerne a quick four days later, on June 6.

Dealer Danny Handelman of Ottawa, Ontario, Canada, who sells on eBay under the moniker deh3, started his 10-day auction with an opening bid of $99.99.

It didn’t take long for aficionados of Liberty postal history to begin expressing their interest.

About three hours after the auction opened Nov. 21, the first bidder raised the digital paddle for $100.

Nineteen hours passed before a new player jumped in Nov. 30 with what would turn out to be the winning bid.

In a dramatic finish six seconds before the close, another collector placed an unsuccessful snipe bid of $5,450, which pushed the final realization to $5,550.

Handelman cleared a very handsome profit on the cover because it originally came from a bulk assortment he bought on eBay in August 2017 for slightly more than $12 — almost $10 of which was the shipping fee the U.S. dealer charged to mail the lot.

“The multiple images of the lot revealed that [the $5 Hamilton cover] was the only interesting item in the lot,” Handelman told Linn’s.

As it turns out, the new owner of the cover, Jack Congrove of Washington state, acquired it for his large gold medal-winning, display-class exhibit of Alexander Hamilton, whom he has long admired.

“I have been looking for a nice commercial usage of the $5 Hamilton stamp on cover for some time,” Congrove told Linn’s. “The solo usage is a bonus. I have examples used on bank tags, which are relatively common.”

Congrove, who was alerted to Handelman’s eBay auction via a collector friend in Oregon, told Linn’s he was prepared to pay more than the realized price of $5,550.

A 20-year veteran of the U.S. Army, Congrove brings a soldier’s discipline to his online bidding.

“I have purchased many items on eBay and have found that if you are seriously interested in acquiring something, do not try to be cheap about it,” he wrote via email Dec. 3. “I bid the maximum amount I am willing to pay. If someone else beats my bid, more power to them.”

In a follow-up telephone conversation with Linn’s Dec. 4, Congrove demurred when asked to reveal the exact amount of his maximum bid.

However, he did say that he bid more than the $7,000 value assigned to a $5 Hamilton single franking on a registered cover listed in the 2018 Scott Specialized Catalogue of United States Stamps and Covers.

Through an eclectic selection of items including period newspapers and letters written when Hamilton was U.S. treasury secretary, Congrove’s exhibit tells the story of the statesman’s life and his impact on the fledgling United States.

Congrove plans to show the exhibit — including the $5 Hamilton cover — at the American Philatelic Society and American Topical Association’s joint national exhibition in Columbus, Ohio, Aug. 9-12, 2018.

Despite Congrove’s steely resolve to acquire the cover, at least one Liberty series specialist was surprised when it didn’t sell for more.

Roland Austin of Oklahoma, the owner of another $5 Liberty solo on cover, is chair of the Liberty Series Committee of the United States Stamp Society.

“I expected it to realize a much higher amount,” Austin told Linn’s just hours after the auction concluded.

Nonetheless, Austin acknowledged that “the hammer price does indicate just how healthy the market is for quality Liberty series covers.

“With eBay, it just depends on when an item is listed so that the right collectors happen to see it to compete and bring out a more accurate buying price,” he said.

To illustrate his point, Austin drew Linn’s attention to yet another new $5 Liberty solo cover, which sold on eBay Nov. 8 for just $400.

“I saw it, expecting there to be a huge bidding war over it,” Austin said.

But the expected fight never materialized, and just one bidder jumped in to purchase the cover.

Shown here front and back, it is a small 6¾-size envelope sent via registered mail from Boston to Calgary, Alberta, Canada.

This cover, too, has a whiff of the philatelic about it because the sender was none other than H.E. Harris & Co.

According to Linn’s census of $5 Liberty covers, Congrove’s is the fourth solo, nonbusiness reply postage-due use to come to light.

Strictly speaking, Congrove’s cover is not a pure commercial (nonphilatelic) use because the German word for stamps, “briefmarken,” is written below the addressee’s name.

One possible breakdown of the postage required at the time it was mailed in 1960 is as follows: 50¢ registry fee and $4.50 postage for a 15-ounce parcel at 15¢ per half ounce.

However, the cover’s overall condition suggests that it didn’t contain bulky and/or heavy items that weighed in at just under 1 pound.

Rather, it’s probable that the required postage was noticeably less than $5. The sender simply used the $5 Hamilton stamp as a convenience and, perhaps, as a philatelic favor to the recipient.

Otto Blattler, the sender, likely was a stamp collector or dealer, but Linn’s could not find direct evidence of this. According to the American Philatelic Society, he was not a member at the time the cover was mailed.

Austin’s $5 Liberty solo cover, which Linn’s reported for the first time in the May 29, 2000, issue, also may be considered philatelic because the sender was New York dealer Jovan Jovanovich.

That cover was mailed in April 1961 from New York City to Kipushi, Kantanga, Africa.

In a twist of irony, the original finder of the Jovanovich cover also paid next to nothing for it. He fished it from a dealer’s cover box at a show in Brussels, Belgium, for the equivalent of $1.10.

Austin told Linn’s he purchased the cover for a four-figure sum about eight years ago.

The first $5 Hamilton cover was discovered in late 1997. Linn’s broke the news of the find on the front page of its Dec. 22, 1997, issue. Since that time, about 20 covers have been located, according to records kept at Linn’s.

Of these, six are commercial registered bank covers, including the earliest-documented use cover Linn’s reported Sept. 9, 2013.

In August 1999, one of the six registered commercial covers sold at auction for $7,762. It is addressed to the Wildey Savings Bank in Boston and is the only known small (6¾-size) domestic cover bearing a solo $5 Hamilton stamp.