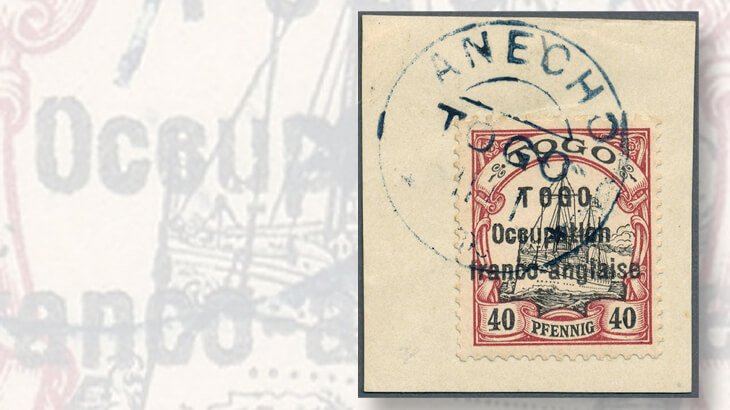 The Auction Galleries Hamburg sale includes a second stamp from the 1915 occupation set, also on piece. 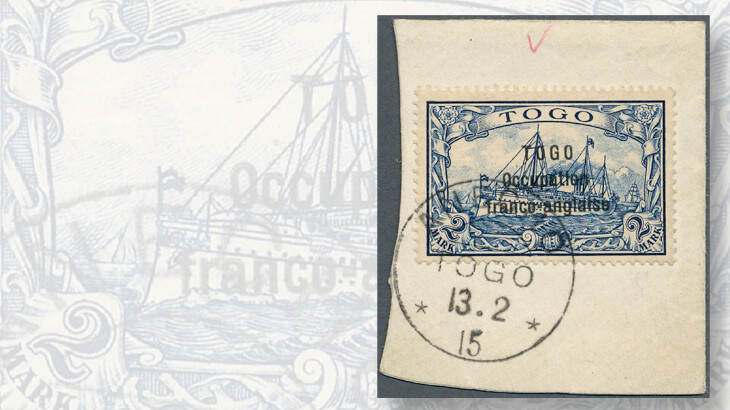 The March 3-4 auction by Auction Galleries Hamburg includes a rare overprint variety on the 1915 2-mark Togo stamp issued under French occupation. The on-piece used stamp has a full postmark from Anecho, Togo.
Previous
Next

The sale features an artifact of the World War I French occupation of Togo, on the Gulf of Guinea in western Africa.

A German protectorate since 1884, Togo came under military rule by British forces in the colony’s western region and French forces in the east during the hostilities.

The familiar Togo stamps of 1900 showing the kaiser’s yacht, SMY Hohenzollern II, were overprinted by both of the occupying nations.

The stamps under French occupation issued in 1914 had a serif-type overprint, but in 1915, a few provisionals were overprinted with a sans-serif type by the printing plant at the Lome Catholic mission.

Some 13 major varieties of these stamps with the sans-serif overprint are listed in the Scott Classic Specialized Catalogue of Stamps and Covers 1840-1940 as Togo Scott 164-175, with values ranging from a few hundred dollars to many thousands.

The top four denominations, from 1 mark to 5 marks, have no values listed, presumably because there is limited information available on which to base a figure.

The upcoming Auction Galleries Hamburg sale offers a used example of the overprinted 2-mark blue stamp (Scott 173), of which just seven examples were issued, according to the 2016 Michel Germany Specialized catalog.

This example is on piece with a complete and clear circular Feb. 13, 1915, postmark from the coastal town of Anecho.

The stamp was part of a cover sent by the German postmaster of Togo to a friend in Freiburg, Germany, according to the auction house, and carries a BPA photo certificate.

A second used stamp from the same sans-serif overprint set also is being offered in this auction: the smaller 40-pfennig stamp (Scott 170), which is valued used in the Scott Classic Specialized catalog at $7,000.

The auction offers worldwide stamps and postal history, with significant representation in Germany and related areas.

Details of the auction lots are posted online, with online bidding options available.