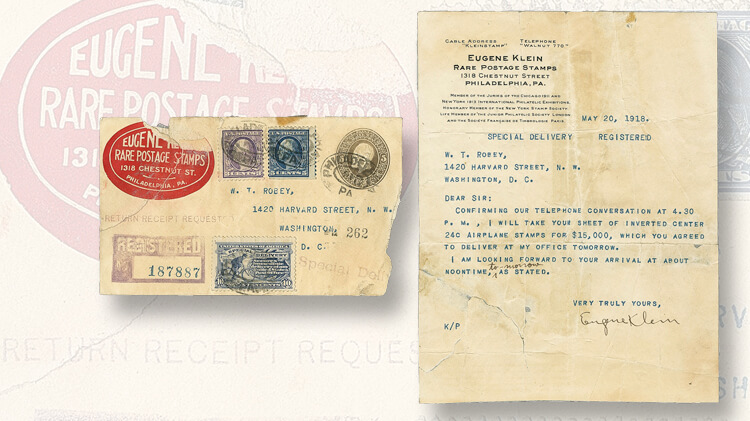 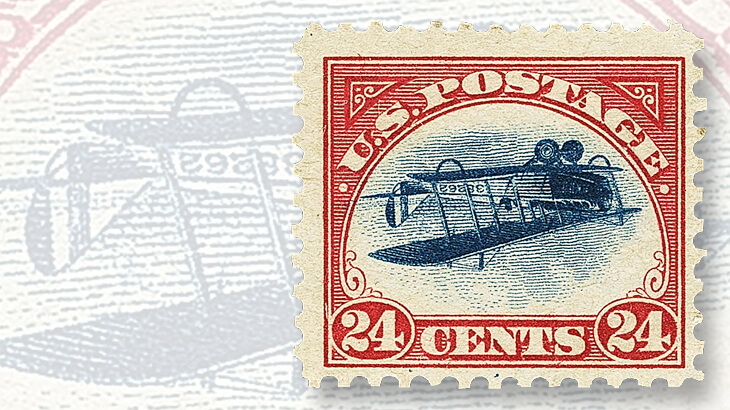 This Position 28 example of the famous Jenny Invert error stamp is being offered by Robert A. Siegel Auction Galleries of New York City as part of the firm’s Feb. 28 auction of the Don David Price collection of the 1918 24¢ Jenny airmail issue. 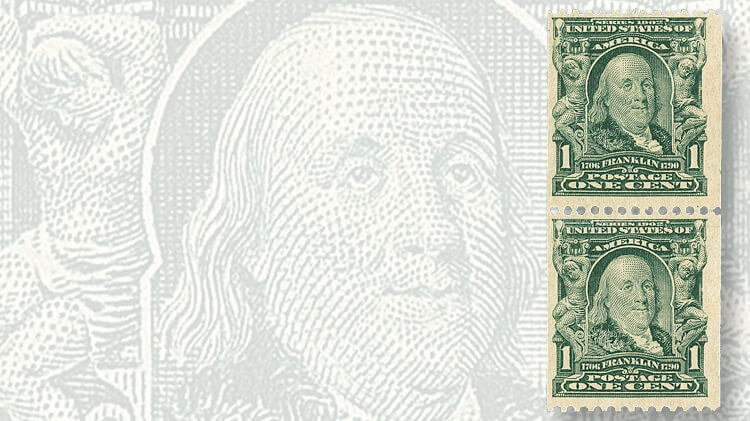 A pair of the 1906 1¢ blue-green Benjamin Franklin vertical coil, one of just 12 known pairs, will be auctioned during the March 1-2 Siegel sale of United States stamps. 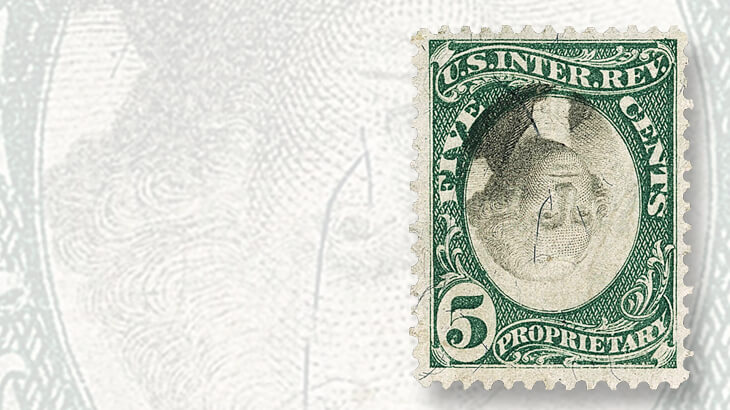 The unique 1871 5¢ green and black George Washington proprietary stamp with inverted center is being offered during Siegel’s Feb. 28 auction of the Grant Inman collection.
Previous
Next

The material on offer includes some of the most highly prized United States stamps, Civil War and Confederate States stamps and postal history, plus a unique artifact related to the discovery and sale of the famous Jenny Invert airmail error.

The Don David Price collection of the 1918 24¢ Jenny airmail issue is the first of the five auctions on the Siegel schedule, with the 64-lot sale starting Tuesday at 10:30 a.m.

This specialized collection includes one example of arguably the most famous stamp error in the world: the carmine and blue Jenny error stamp with inverted center that shows the “Jenny” airplane flying upside down (Scott C3a).

The stamp is from position 28 on the discovery pane of 100, and has been off the market for more than 65 years.

It was obtained at auction by Price’s father, Milton Price, on Nov. 29, 1950, and remained with the Price family after Milton’s death in 1961.

Though much of the Price collection was sold in 1992, Don David Price retained the Jenny Invert (and a few other stamps) and showcased the error in his 24¢ Jenny airmail collection.

The sound stamp is described by Siegel as “Position 28, the eighth stamp in the third row of the sheet of 100 purchased by William T. Robey on May 14, 1918, original gum, lightly hinged, fresh and bright colors, attractive centering and margins.”

The stamp is listed with the $450,000 value found in the 2017 Scott Specialized Catalogue of United States Stamps and Covers.

The story of Robey’s fortuitous purchase of the pane of 100 invert stamps is retold in the introduction to the auction catalog, along with a detailed history of the 24¢ Jenny stamp and its use on government-authorized airmail.

Within a week of making his $24 purchase, Robey agreed to sell his find for $15,000 to stamp dealer Eugene Klein, who was making the purchase on behalf of his client, Col. Edward Howland Robinson Green.

The Siegel auction of the Price collection includes an amazing souvenir of that initial transaction: a registered letter dated May 20, 1918, and mailed via special delivery from Klein to Robey, confirming the purchase price and arranging for Robey to deliver his stamps to Klein’s Philadelphia office the next day.

Along with the typed letter, the auction lot includes the roughly opened envelope with Klein’s corner card and Robey’s name and address typed on the front.

The 99-year-old letter with envelope is offered with a pre-auction estimate of $15,000 to $20,000, a range that rather neatly matches the price Klein paid Robey for his stamps on the low end, and the price Green paid Klein the next day on the high end.

The auction also offers a first-day-of-sale cover and a few first-flight covers, along with numerous examples of printing varieties that document the problems the Bureau of Engraving and Printing faced trying to properly center the blue Jenny airplane within the red frame. Examples of stamps showing the plane flying high or low, or positioned to the left (“fast plane”) or right (“slow plane”) abound in this sale.

The experimental bluish paper stamps (Scott 357-366 and 369) “range from uncommon to extremely rare,” the Siegel catalog points out; “in certain cases, only one of a particular item exists outside government institutions.”

The bluish paper items specifically identified as unique in the Scott U.S. Specialized catalog are offered in this sale: the 4¢ orange-brown plate number strip of three, the 5¢ blue plate block of six, and the 8¢ olive-green plate number strip of three, with Scott catalog values that begin at $100,000 (in italics, identifying a difficult-to-value item) and go well beyond that figure.

At 2:30 on Tuesday afternoon, part 4 of the Grant Inman collection will be offered, described as “Proprietary and other Revenue issues.”

Among the rare revenues offered in this segment of the Inman collection sale is the unique 1871 5¢ green and black George Washington proprietary stamp with inverted center (Scott RB5c), which sold previously in the 2000 Robert Zoellner sale. The Scott catalog value of $130,000 reflects that earlier sale, but is again presented in italics. The stamp is offered with its 1989 Philatelic Foundation certificate.

The larger sale of United States stamps begins on the morning of March 1 and continues the following day.

The sale is described by Siegel as including superb quality 19th-century classics, the Vaquero collection of high-grade 20th-century issues, “major rarities from a longtime collector, featuring special printings and 1908 coils,” plus Officials, newspaper and periodical issues, and carriers and locals.

Even rarer than all of these inverts is a coil at once familiar and remarkably unusual.

Just 25 examples are known of the 1906 1¢ blue-green Benjamin Franklin vertical coil (Scott 316): nine pairs, three line pairs (one of which is rejoined) and a single, all unused.

This auction offers a coil pair with a small tear in the right margin of bottom stamp, and tiny pinhole in the upper-left margin of the top stamp (described as “barely noticeable”).

This pair includes 1976 and 2017 Philatelic Foundation certificates, and is listed with the Scott catalog value of $335,000.

This auction offers a significant range of material that includes a considerable number of postmasters’ provisionals, Union and Confederate patriotics, blockade-run mail, and more.

All five auction catalogs can be viewed on the Siegel website, or downloaded as PDF documents, with online bidding options available.