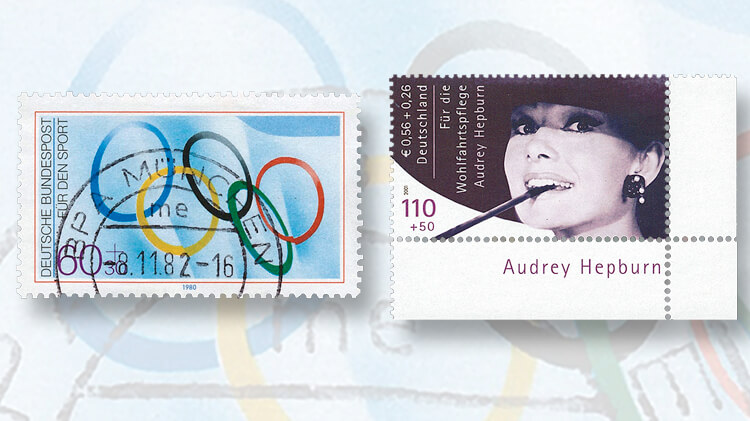 Two modern German rarities that are not supposed to exist will be auctioned by the Christoph Gaertner firm in Germany during its June 20-23 auction series.

A 60-pfennig+30-pfennig Olympic Games semipostal stamp printed in 1980 was withdrawn before it was issued after what was then West Germany joined a multination boycott of the Summer Games in Moscow to protest Soviet military action in Afghanistan.

However, a few of the unissued stamps in the possession of a German postal official were accidentally used on mail and later recovered by collectors. The example on offer is neatly postmarked and offered with bidding to start at €20,000 (approximately $22,460).

Twenty-one years later, a German semipostal set celebrating film stars was planned to include a €1.10+€0.50 stamp honoring Audrey Hepburn. This stamp was also withdrawn before it was issued following concerns expressed by the Hepburn estate, and again a few examples were used on mail. For the benefit of charity, the estate agreed to auction a single mint pane of 10 stamps in 2010.

The upcoming auction will offer the lower right margin single from the mint pane, with “Audrey Hepburn” inscription in the bottom selvage. Bidding starts at €100,000 ($112,375).

The auction includes an extensive selection of Germany and worldwide stamps, postal history and collections, including the only known complete pane of 100 of the United States 1893 $2 Columbian stamp (Scott 242).