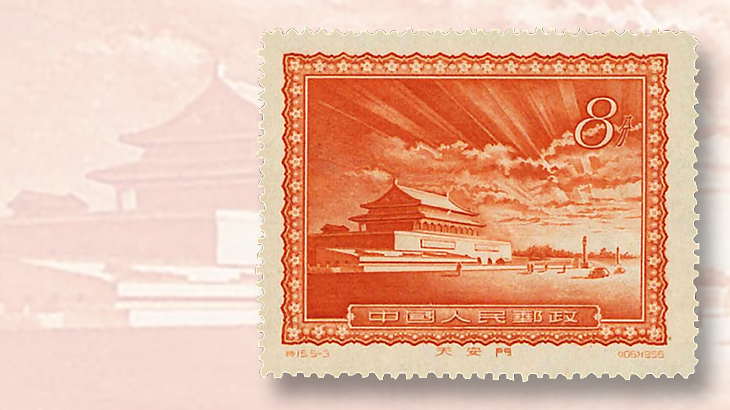 An unissued People’s Republic of China 1956 8-fen orange Tiananmen Views of Peking stamp is being offered during the InterAsia auction. 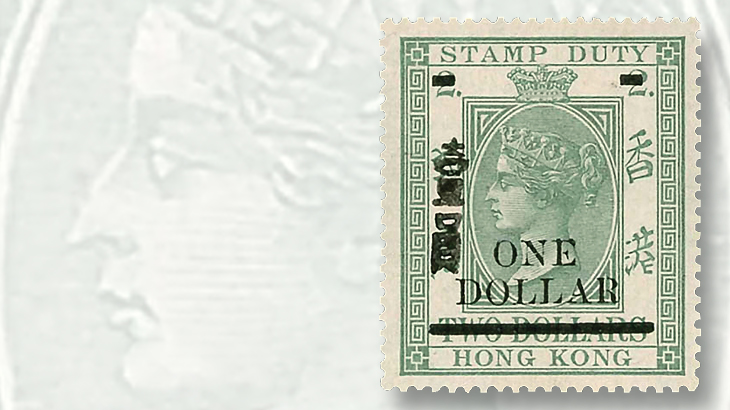 InterAsia Auctions in Hong Kong will conduct a series of four public auction sales over the course of four days, April 1-4.

The sales offer “a number of important specialized collections representing a broad and deep range of material encompassing the full spectrum of Chinese and Hong Kong philately,” according to InterAsia.

A set of 1877 hand-painted essays from the Large Dragons collection of Jane and Dan Sten Olsson opens the first session. The lot consists of artist drawings from De La Rue intended for the first postage stamps of China, including an ink drawing of the yin-yang watermark that was used on the printed 1885 Imperial Dragon issues.

The stamp drawings feature three vertical images and three horizontal, representing the 1¢ lake, 2¢ green, and 5¢ orange-brown, with a vignette of a yin-yang symbol flanked by two dragons. InterAsia’s estimate of this lot in Hong Kong dollars is $1.8 million to $2.2 million, or roughly $231,700 to $283,200 in United States dollars.

The sale of the Olsson Large Dragons collection consists of 41 lots with essays, issued stamps, and seven covers.

One of the covers, mailed in 1882 from Chinkiang to Middletown, Conn., via San Francisco, is franked with the 3-candareen brown-red Imperial Dragon on thin paper for the domestic rate, and a 5¢ blue Zachary Taylor stamp for foreign postage to the United States. Struck with multiple markings from Chinkiang, Shanghai, San Francisco, and Middletown, it is one of 11 known Large Dragon-U.S. combinations, and one of two known from Chinkiang. It has an estimated value of HK$600,000 to HK$800,000 (US$77,200 to US$103,000).

Material from the K. Ashleigh collection is included among the Hong Kong selections. A standout example is the rare variety of the 1897 $1 on $2 dull bluish green Queen Victoria postal fiscal stamp, perf 14, with diagonal Chinese surcharge omitted. According to InterAsia, the stamp, ex-Dale-Lichtenstein, is one of two known examples, and is assigned an estimate of HK$200,000 to HK$250,000 (US$25,750 to US$32,200).

The stamps and postal history of the People’s Republic of China and liberated areas are offered in a catalog containing some 474 lots, including general issues and W series, later issues, military post, booklets, complete sheets, postal stationery, Official seals, and collections.

It also offers some of the unissued stamps of the People’s Republic, such as the 1956 8-fen orange Tiananmen Views of Peking stamp.

This example is described as unused and a “great rarity,” well centered with deep rich color on white paper that has been pressed. It has a few minor paper blemishes on the reverse, but sharp engraving of the dramatic design on the front. The estimate for this stamp is HK$700,000 to HK$900,000 (US$90,100 to US$115,800).