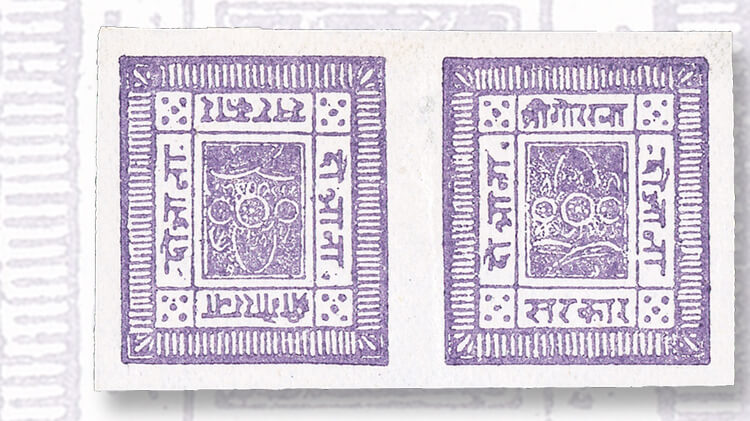 Key items in the Pattiz Nepal collection included this imperforate tete-beche pair of the 2a stamp in remarkable condition. It surpassed its estimate of $3,000 to $4,000 to bring $15,625 at Spink’s Jan. 26 sale in New York. 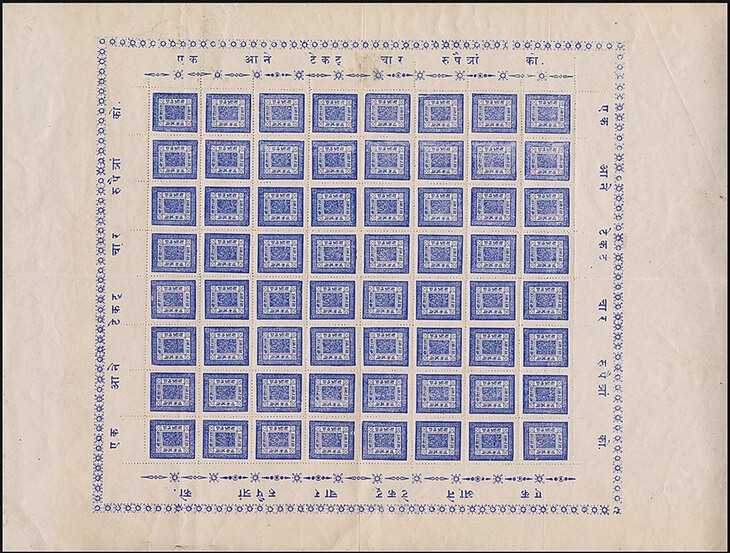 The Jan. 26 Spink auction in New York featured the Pattiz collection of Nepal. A highlight of the sale was this complete sheet of Nepal’s first issue, the 1-anna of 1881, which realized $25,400.
Previous
Next

Two days after its auction of philatelic items of the former British Empire, Spink offered the Henry “Hap” Pattiz collection of Nepal on Jan. 26 in New York.

The remote Himalayan nation issued its first stamps in the 1880s, but Nepalese stamps were only valid in Nepal and India until 1959, when they became valid for mail sent worldwide.

Early issues were printed either on paper that was either locally made or imported from Europe, and given rudimentary pin perforations or left imperforate.

A full sheet of 64 of Nepal’s first stamp, the 1-anna of 1881 (Scott 1) showing a traditional sripech (royal crown) and crossed khukris (knives), was described as a unique surviving intact sheet of the first setting with marginal inscriptions and a border made up of sun- and spear-shaped ornaments. It was printed on pre-gummed European paper and given pin-perforations.

Described as being in a “most remarkable state of preservation” despite several folds, it sold for $25,400, including the buyer’s premium levied by Spink’s New York office of 15 percent plus $100.

In the third setting for the 2a value, one cliche was apparently inverted in the sheet, resulting in a rare tete-beche error, where adjoining stamps are inverted in relation to each other.

Spink reports that only three tete-beche pairs are known, all unused. One is pin-perforated (Scott 2a) and damaged, and two are imperforate (5a).