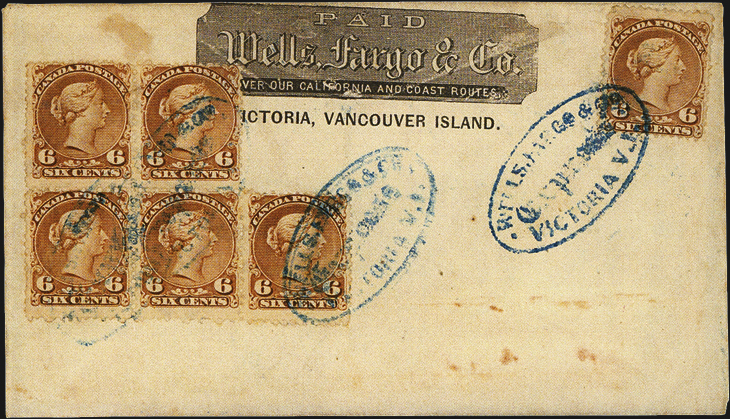 An express cover franked with six of the 6¢ yellow-brown Large Queen stamps and bearing the Victoria, Vancouver Island, printed frank of Wells, Fargo & Co., to be sold at the June 17 auction. 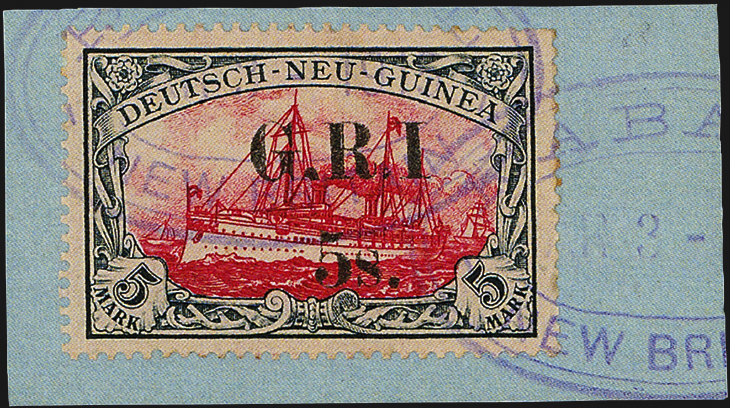 One of just two known used examples of the 1914 New Britain surcharged 5-shilling-on-5-mark slate and carmine stamp with missing period on the overprint will be offered at the June 17 public auction by Eastern Auctions.
Previous
Next

Eastern Auctions in New Brunswick, Canada, is offering a sale of worldwide and British North America stamps and postal history, including a number of rare British Commonwealth stamps, plus proofs, errors, and more.

Several on-piece items from the 1914 issues of New Britain (the former German New Guinea) are featured among the worldwide offerings, with a particularly rare used example of the surcharged 5-shilling-on-5-mark slate and carmine Kaiser’s Yacht issue that features the missing period after the “I” in the “G.R.I.” overprint. On this variety, the two surcharge lines are spaced 3½ millimeters to 4mm apart (Scott 15a).

Eastern Auctions notes that this recently discovered example is one of only two known used examples of this variety from the G.R.I. occupation issue, and describes it as “by far the finer” of the two.

The stamp is tied to piece by two March 3, 1915, strikes of the Rabaul, New Guinea, oval datestamp in violet and is pencil-signed on the reverse of the piece by stamp expert Sergio Sismondo, whose 2017 certificate of expertization also accompanies the item.

A very similar variety, again with no period following the “I” in the overprint, exists for the 3sh-on-3m violet-black stamp as well (Scott 14a).

In this case, there are three used examples known, Eastern Auctions explains, and the one in this auction, a “new discovery,” also is on piece with a March 3, 1915, Rabaul postmark. The Scott Classic Specialized catalog value for the used stamp is $14,000.

For both of these used stamps with “G.R.I.” overprint, the catalog value is expressed in italics to indicate an item that can be difficult to value accurately.

Several top classics of the British North America colonies are offered in the upcoming auction, including a variety of the unused New Brunswick 1851 3-penny printed in dark red (Scott 1a); a pair of Nova Scotia’s first issue, the 1853 1d red-brown Queen Victoria as an unused pair and as a used single (1); unused examples of the British Columbia and Vancouver Island 1860 2½d in bright orange rose and dull orange rose (1); and an original-gum example of the Newfoundland 1861-62 1d red-brown variety on medium-hard wove paper (16).

Also on offer is an unused example of Canada’s 1859 6d Prince Albert stamp (Scott 13), perforated gauge 11¾ (according to the Unitrade Specialized Catalogue of Canadian Stamps) and printed in brownish gray on medium wove paper (according to the Eastern Auctions description).

A particular feature of this stamp, described as “displaying centering superior to most existing examples,” is its provenance: it was once part of the collection of the famed Count Philippe Ferrari.

The postal history offerings include a number of Wells, Fargo & Co. covers, some with the Victoria, Vancouver Island, printed frank.

One undated example is franked with six of the Canada 6¢ yellow-brown Large Queen stamp (a block of five at left, and one single at upper right). The stamps are tied with blue oval Wells, Fargo & Co. Express cancellations from Victoria. The franking pays the newly adopted postage rate of 3¢ per half ounce, Eastern Auctions explains.

A selection of Canada’s modern errors and varieties also are included in this sale, as well as large lots and collections.

Lots from the sale can be viewed online at the Eastern Auctions website, with online and other bidding options available.