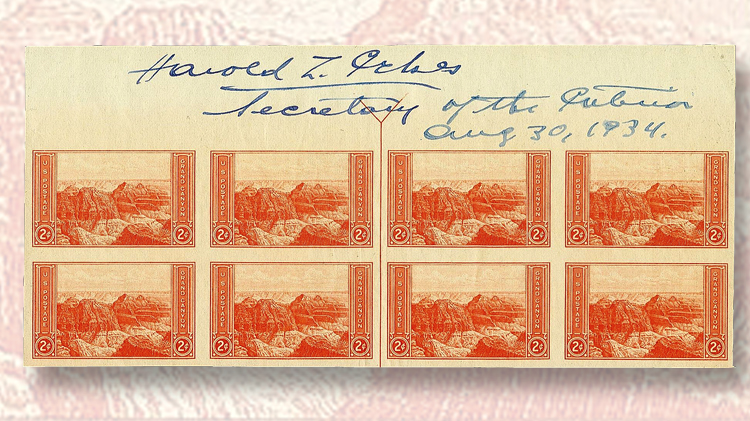 One of three signed mint arrow blocks of the United States 1934 National Parks issue from the collection of Harold L. Ickes, Secretary of the Interior during the administration of Franklin D. Roosevelt. The imperforate stamps are from the original printin 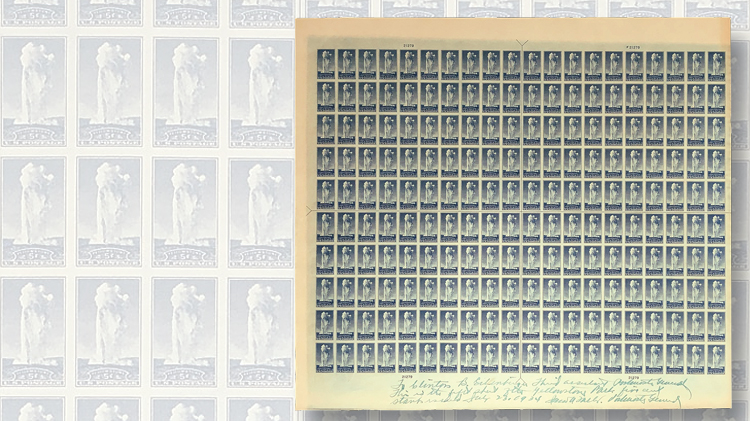 Also offered during the H.R. Harmer auction: a set of 15 complete imperforate sheets from the 1934 issues, each signed and personalized in the margin by Postmaster General James A. Farley. 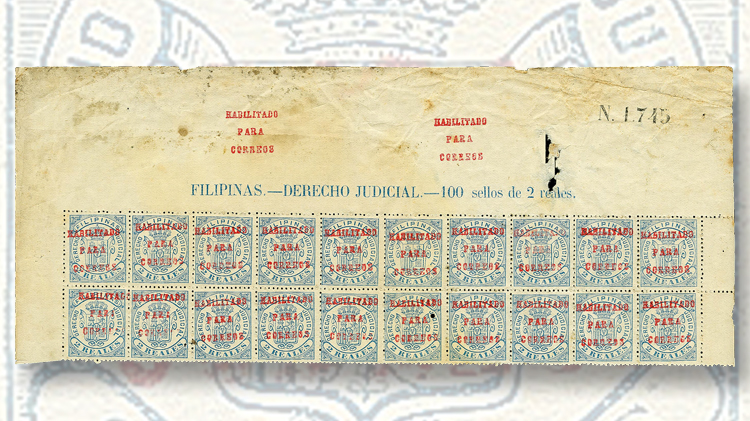 The H.R. Harmer sale of the Richard D. Miggins collection of the Philippines includes this top margin block of the 1881 red overprint on the 2-real blue revenue stamp, the only recorded multiple of this issue.
Previous
Next

The H.R. Harmer firm in California will offer its next auction series May 31-June 3 in the Newport Beach Room at the Hilton Costa Mesa, 3050 Bristol St., Costa Mesa, Calif.

The auctions are described in two catalogs, with the first presenting United States, British Commonwealth and foreign stamps, covers, and collections. The second offers material from the Richard D. Miggins collection of the Philippines.

Together, the two sales include more than 3,800 lots of material.

Both catalogs have been posted online on Harmer's website and can be viewed on the website or downloaded as complete PDF documents.

Several lots among the United States issues bring together material from the original imperforate stamp sheets presented as gifts in 1934 by Postmaster General James A. Farley to friends and political figures, including President Franklin D. Roosevelt, and Farley’s own three children.

When collectors protested these gifts, Farley stopped providing the signed sheets and ordered a new special imperforate printing of the sheets that had been presented, so that collectors could have similar material for their own collections.

As described by H.R. Harmer, the items offered in this sale are not from those 1935 special printings identified as United States Scott 752-775, but from actual sheets of the original 1934 printing given out by Farley as postmaster general.

An example is one lot offering mint arrow blocks of imperforates from Scott 740-749, including three blocks that are each hand-signed “Harold L. Ickes/Secretary of the Interior/Aug. 30, 1934” in the sheet margin (a 2¢ block of eight, 3¢ block of eight, and 5¢ block of 12).

The Bureau of Engraving and Printing applied gum to the back of Ickes’ imperforate sets at his request.

Details of the issue, including some small faults, are noted on 2015 certificates from Professional Stamp Experts for each block in the lot.

The show stopper among these offerings is a single lot of 15 intact imperforate sheets of Scott 738-751 and CE1, consisting of 200 stamps each with the exceptions of Scott 750 and 751, which each comprise 20 six-stamp souvenir sheets. All of the imperforate press sheets are margin-signed by Farley to Third Assistant Postmaster General Clinton B. Eilenberger. Each is dated 1934, distinguishing them from the 1935 special printings.

The original Farley gift sheets are rarely seen intact, and this particular grouping presented to Eilenberger was last offered at auction 41 years ago. H.R. Harmer estimates that this single lot comprises about 15 percent of the entire number of imperforate sheets distributed by Farley, many of which are now in museum care or have been cut into blocks for sale.

The start price for bidding on the Farley sheet grouping is $50,000.

Additional lots bring together groupings of imperforate commemorative singles, margin blocks and more, including material from the collections of Ickes and Roosevelt.

The auction also includes an intriguing postal card essay possibly dating from around 1974, which uses a nondenominated design very similar (but not identical) to the 1974 10¢ It All Depends on ZIP Code stamp (Scott 1911).

H.R. Harmer calls it an unadopted design proposed for international mail, very fine and rare. The start price for the postal card essay is $900.

More than 200 stamps and covers from Great Britain and the British Commonwealth will be offered during the second session, scheduled for June 1.

The offerings include classic as well as modern material, with a number of handsome items from Canada and British North America.

The scarce 1851 6-penny yellow-green stamp of Nova Scotia (Scott 4) is one example, an unused “very fine sound example” with clear to full margins. The stamp is accompanied by a 2008 certificate from the Philatelic Foundation declaring it genuine with no gum (the Scott catalog notes this issue is “rarely found with any remaining original gum”). The Scott catalog value is $6,000, and the H.R. Harmer start price for this example is $1,200.

The Richard D. Miggins collection of the Philippines offers material gathered during the course of 40 years and displayed in Miggins’ award-winning exhibits.

The offerings, numbering more than 1,000 lots, span from the Marianas Islands period through the 1942-44 Japanese occupation period and the 1944 Victory handstamped overprints.

Among the stamps of the Spanish Administration period are numerous “Habilitado por la Nacion” overprints, including one of the rarest: the 1874 5-centavo orange (Scott 24A) in the form of a used single “with rich color, ample to full margins all around.”

Only three or four examples of this stamp are known in any condition, according to the H.R. Harmer description, and this one is accompanied by a 2012 certificate from the American Philatelic Society Expertizing Service.

The Scott catalog value for this stamp is $8,000, listed in italics (which denotes an item that can be difficult to value accurately). The auction start price for the single stamp is $5,000.

Another rarity is found among the 1881-89 surcharges, and in this case it takes the form of the only multiple recorded for the 1881 red overprint on the 2-real blue revenue stamp (Scott 127A).

A single stamp carries a $900 value in the Scott catalog. This 20-stamp imprint block has some small faults, including a small punch hole in one of the stamps, but it remains “one of the gems of Philippines philately,” H.R. Harmer notes.

This block is also certified by the American Philatelic Society Expertizing Service, and has a start price in this auction of $10,000.

Online bidding is available with registration on the H.R. Harmer website for both the U.S. and foreign auction and the Miggins Philippines auction.