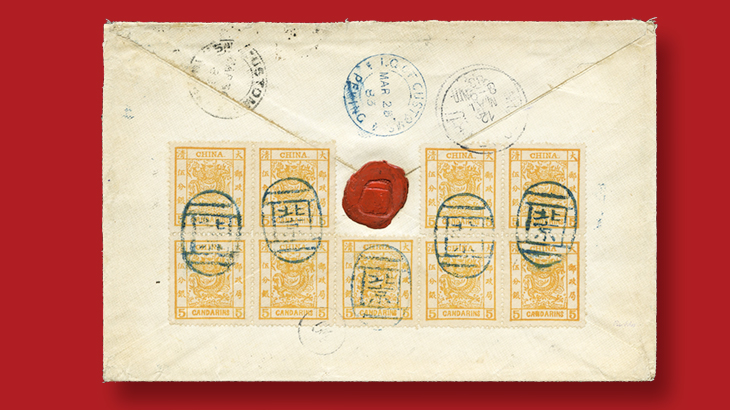 Described as the crown jewel of Chinese philately, the 1883 Countess Caroline cover franked with a block of nine of the 5-candareen stamp will be offered during the Dec. 5-9 David Feldman auction. 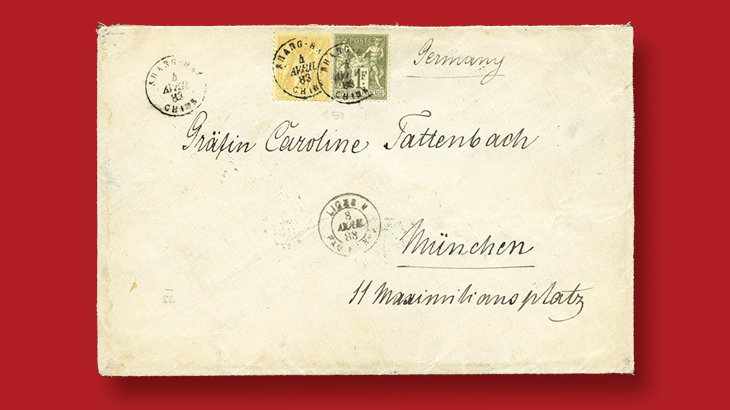 The front of the 1883 China cover. Addressed to Countess Caroline Tattenbach in Munich, Germany, it is struck with a number of Chinese, French and German postal markings. 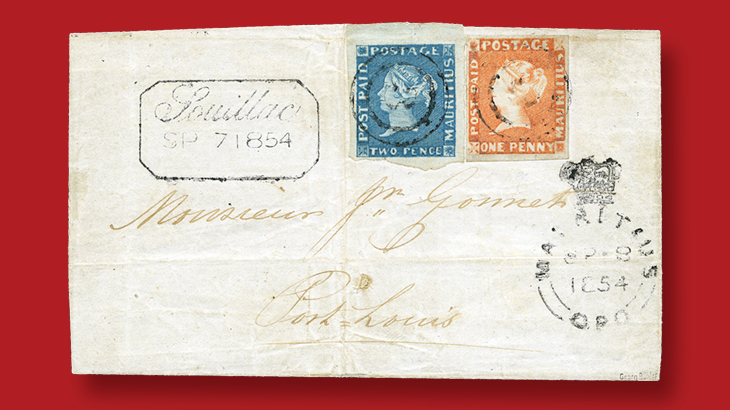 The David Feldman auction series includes a session of Mauritius material on Dec. 7. This 1854 cover is the only one known to bear a combination of both the 1-penny orange and 2d blue Queen Victoria Post Paid issues as early impressions.
Previous
Next

An envelope described as the crown jewel of Chinese philately, mailed nearly 135 years ago from China to Germany, will be offered at public auction by David Feldman International Auctioneers in Geneva, Switzerland.

Feldman is offering an auction series Dec. 5-9 that is documented in nine separate catalogs broadly encompassing the world of stamps and postal history.

The auction celebrates the 50th anniversary of the Feldman firm and its recent move to a new location.

The Countess Caroline cover from China is just one of the many rarities collectors will encounter.

The auctions begin Tuesday with 245 lots of classic Finland that includes the Erkki Toivakka Finland grand prix collection, followed by more than 600 lots of Tibet presenting material from the Larsson and Olsson collections.

On Wednesday the firm will feature lots from a French Levant grand prix collection, France and colonies, and the first selections from a sale of general Europe.

The Europe offerings resume on Thursday morning and lead into a 117-lot Rarities of the World sale, followed by 278 lots of Mauritius.

The Friday sessions conclude with Great Britain and the British Empire, a selection that features the award-winning collection of Montserrat postal history by Peter McCann.

Saturday will close the series with international material from outside of Europe, and 200 all-world collections.

The Countess Caroline cover is a star of the Rarities of the World catalog. The 1883 cover is franked on the reverse with a block of nine of the rare China 5-candareen orange yellow Imperial Dragon stamps with wide setting.

“The cover is widely acknowledged since its appearance at public auction in the 1970s as the most valuable cover of China,” Feldman notes in the auction lot description.

The cover is addressed to Graefin (Countess) Caroline Tattenbach in Munich. The scarce Chinese stamps are canceled and tied by blue oval Peking “pa-kua” cancels and showing I.G.Customs/Peking circular date­stamp of March 25, 1883, according to Feldman, plus a Chinese Customs Shanghai circular datestamp of March 30.

The auction description further notes that the cover was sent to Germany via the French post office in Shanghai, and two French stamps on the front are tied by French post office Shanghai postmarks dated April 1. The cover front bears additional French maritime and Germany arrival markings.

The first of these, mailed in 1854, is the only one known franked with a combination of the early impressions of both the 1-penny orange and the 2d blue Queen Victoria Post Paid issues.

The second is simply described by Feldman as “the most beautiful cover of Mauritius,” franked with a pair of the 2d blue in which the left stamp shows the famous “PENOE” variety.

The catalog for the Dan Walker collection of princely states of India not only offers some 325 lots of this exotic material, but also carefully details the stamp history and location of each of these regions that are identified as India’s feudatory states in both the Scott and Stanley Gibbons catalogs.

The All World catalog for this auction series lives up to its name with items from all over the globe. It is particularly strong with lots representing the Otto Z. Sellinger collection of Belgium, as well as Egypt, and Russia and the Soviet Union.

The catalogs for the David Feldman auction series can be viewed here, with an option for online bidding available.