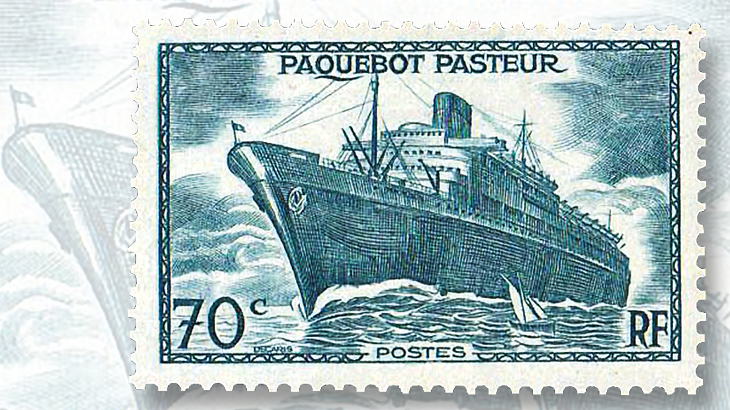 A rare 1941 French semipostal error with missing red surcharge will be offered during the Oct. 11-13 auction by Daniel F. Kelleher in Connecticut.

Daniel F. Kelleher Auctions will present its flagship sale Oct. 11-13, offering more than 1,800 lots at its offices in Danbury, Conn.

A great 20th century rarity is included among the worldwide issues offered during the auction’s opening session on Wednesday.

Printed in dark blue green, the handsome but otherwise unassuming French stamp from 1941 commemorates the SS Pasteur, an ocean liner pressed into service as a troop ship that had been commissioned the previous year.

Though printed with a 70-centime denomination in the lower left corner, the horizontal stamp was issued only as a surcharged semipostal: a red overprint applied two short horizontal lines across the 70c inscription, and added “1f” (franc) in the upper left corner and “+1f” in the upper right corner.

The semipostal is listed in the Scott Standard Postage Stamp Catalogue as France Scott B114.

In the 76 years since the stamp was issued, just eight genuine examples have been identified with the red surcharge missing. One of those eight errors is included in this Kelleher sale.

The stamp shows a nicely centered design and is described by Kelleher as having toned original gum “not really visible on front.” It is signed “A. Brun” on the reverse by noted France and colonies expert Aime Brun.

The Pasteur stamp is not the only error in this auction featuring a ship.

The U.S. stamp offerings on Thursday include an unused example of the 1901 1¢ green and black Fast Lake Navigation stamp from the Pan-American set, with the center vignette showing the steamer City of Alpena inverted (Scott 294a).

Kelleher describes this example of the 1¢ error as “a flawless example with absolutely gorgeous deep rich color; surprisingly difficult to find in such lovely condition.” The previously hinged stamp is accompanied by a 2017 Professional Stamp Experts certificate.

The 2017 Scott catalog value for the unused error is $12,500, listed in italics to indicate an item that can be a challenge to value accurately.

The Thursday session also includes hundreds of classic U.S. stamps, essays and proofs, with a significant number of items from the 1869 pictorial series and the 1880-82 reissues.

Another rarity from this error is the 1875 15¢ bright orange Daniel Webster stamp from the Continental Bank Note Co. special printing, of which 39 examples are known to exist. The stamp (Scott 174) has a natural straight edge at left and the usual scissor-separated perforations.

The catalog for the upcoming Kelleher flagship auction can be viewed on their website, and online bidding options are available.