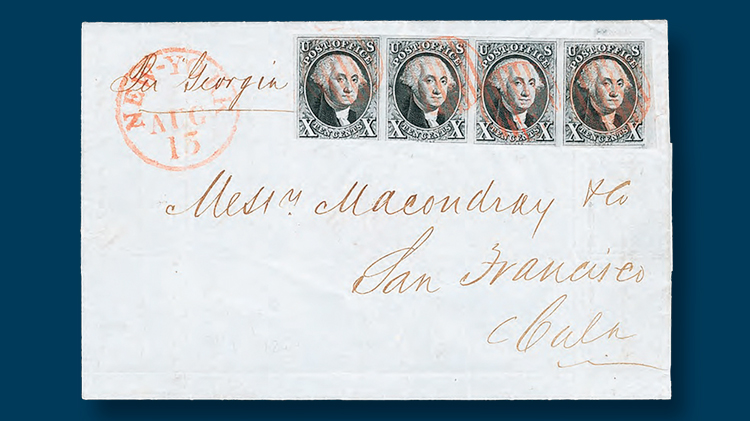 A strip of four 1847 10¢ black George Washington stamps pays the 40¢ rate for this folded letter mailed from New York City to San Francisco via Panama, part of the George J. Kramer collection. 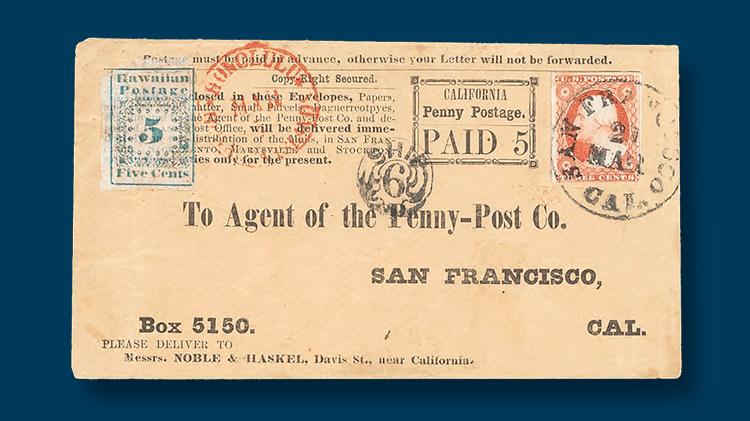 The auction of the George J. Kramer collection of Western trails and routes includes this 1856 triple-franked cover from Honolulu to San Francisco with an uncanceled 1851 5¢ blue Hawaiian Missionary stamp and a United States 1851 3¢ dull red stamp on a 5¢ California Penny Post envelope.
Previous
Next

Material from a celebrated collection of United States postal history will be offered by Schuyler Rumsey Philatelic Auctions during its April 26-29 auction series at the Westpex 2018 stamp show.

The auction of the George J. Kramer collection of Western trails and routes is one of three Rumsey sales taking place during the show, which will be held at the San Francisco Airport Marriott Waterfront Hotel, 1800 Old Bayshore Highway, in Burlingame, Calif.

Details of the show were reported in the April 16 issue on page 54.

The general Westpex auction begins at the hotel’s Bayside Ballroom II on Thursday morning, the day before the show opens to the public. It consists of 2,675 lots of material with U.S. and worldwide stamps and postal history, including an extensive selection of Mexico.

The general auction will be offered in multiple sessions scheduled across all four days.

The Kramer collection will be auctioned beginning at 10 a.m. Friday, and bidding on the third auction, the Bradley Horton collection of U.S. postal cards, will open Saturday at 10 a.m.

George J. Kramer is a well-known name in philately, celebrated as a researcher, expert and exhibiting champion. He has won the American Philatelic Society’s prestigious Champion of Champions award three different times in three different decades, and his exhibit “Vignettes of Western Trails and Routes 1849-1870” was first runner-up in the Indonesia 2012 World Stamp Championship and has earned other important awards.

The covers in this auction document the westward migration that took place in 19th-century America, including the gold rush that led to the development of express companies transporting food, supplies and mailed messages.

Prominent among the covers in this grouping is what Rumsey describes as “the unique triple mixed franking Missionary California Penny Post cover.”

Mailed in Honolulu, Hawaii, in 1856, to San Francisco, Calif., the cover is a prepaid 5¢ black on buff California Penny Postage local stamped envelope (Scott 34LU13A) with the added franking of an 1851 3¢ dull red George Washington stamp (11), and an uncanceled Hawaiian Missionary stamp, the 1851 5¢ blue Type I (2).

The 3¢ stamp is struck with a San Francisco circular datestamp in black, and a “Ship 6” clamshell-style circular due handstamp is also clearly visible.

“The use of a Hawaiian Missionary stamp on this March 1856 cover occurs late in the Missionary issue’s life,” Rumsey explained, “but appropriately at a time when 5¢ stamps were in great demand and short supply in the Islands.”

A cover bearing two nations’ postage stamps and a local post franking is “to our knowledge” unique in this classic period, Rumsey added.

Extensively documented in the auction catalog listing, the cover is offered with an estimate of $200,000 to $300,000.

Another international traveler from this sale also had a San Francisco destination. Mailed from New York City in 1850, the blue folded letter made its journey via Panama, traveling by ship to the port of Chagres, carried overland across the isthmus, and then completing its journey to California on the Pacific.

Its 40¢ franking is paid with a horizontal strip of four of the 1847 10¢ black George Washington stamp (Scott 2). It is described as a beautiful and rare cover, and as one of only seven 40¢-rate 1847-issue covers recorded.

The stamps are tied by red grid cancels, and the front is also struck with a matching red New York circular datestamp.

While the auction offers numerous rarities of this nature with estimates that denote their significance, a great many of the town markings and even some of the express covers fall within the $50-to-$300 range in estimation, providing an opportunity for the interested collector to add an ex-Kramer cover to his or her collection.

The Kramer collection brings together some 417 lots in all.

The extensive Rumsey general auction features a pair of 20th-century U.S. stamp rarities, beginning with a used single of the 1908 4¢ brown Ulysses S. Grant with Schermack Type III perforations (Scott 314A), “very well centered for this difficult issue with design clear of perfs.” The perfs are shown in full on both sides of this sound stamp.

The value for this stamp in the 2018 Scott Specialized Catalogue of United States Stamps and Covers is $50,000, listed in italics to identify a stamp that can be difficult to value accurately.

Another rarity in this sale is the 1923 1¢ green Benjamin Franklin stamp created from rotary sheet waste, perforated gauge 11 (Scott 596). It is one of only 15 recorded examples of this major variety, 10 of which are overprinted with a “Kansas City, Mo.” precancel, as this one is.

The Scott U.S. Specialized catalog values this stamp in the grade of fine at $130,000 with the precancel.

Along with examples of issued cards, the Bradley Horton collection of U.S. postal cards offers a wide range of essays, proofs, specimens and more.

There are also some remarkable errors and varieties, including the only recorded example of the 1885 1¢ brown on buff Thomas Jefferson postal card printed on both sides (Scott UX8f).