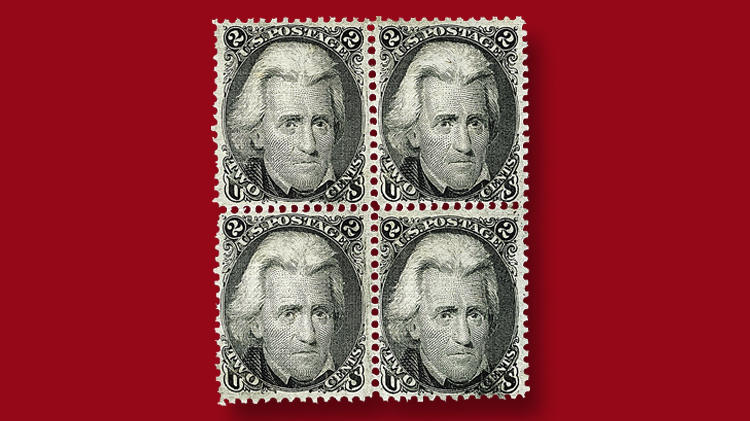 A rare unused block of four 2¢ black Andrew Jackson stamps with D grill will be offered during the April 24-25 Robert A. Siegel auction of the Bernard Faust collection of U.S. 1863-68 Black Jack issues. 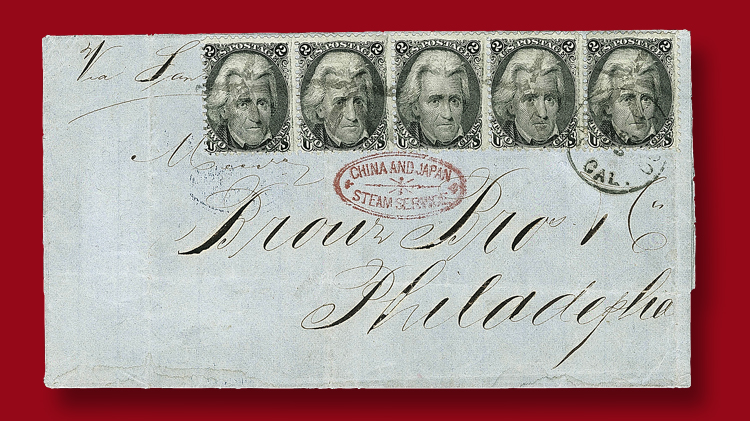 A horizontal strip of five of the 1863 2¢ black Andrew Jackson stamp on an 1868 blue folded letter from Yokohama to Philadelphia. The cover will be offered in the April 24-25 Siegel sale.
Previous
Next

The United States 2¢ black Andrew Jackson stamp, first issued in 1863 in the midst of the Civil War, has a distinct and unusual design. With its imposing engraved portrait of the nation's seventh president, the stamp has come to be known as the Black Jack, with several distinct major varieties issued over the course of just a few years.

Robert A. Siegel Auction Galleries of New York City has scheduled a two-day auction of Bernard Faust’s extensive and specialized collection of U.S. 1863-68 Black Jack issues. The sale will take place April 24-25 at the Siegel galleries. The catalog is available online, with online bidding options available.

The National Bank Note Co. printed the Black Jack stamp (Scott 73), and like other stamps of this era, some of them were embossed with grills of various sizes and configurations to prevent illegal stamp reuse. The grills are identified by single letters, and those known on the Black Jack are the D grill (84), the Z grill (85B), the E grill (87) and the F grill (93).

Examples of the Black Jack impressed with the D grill are rare, Siegel notes, and this auction includes a significant rarity in the form of an unused block of four D grill Black Jacks with original gum.

Its rarity as a multiple and the choice centering of the stamps comprising it has inspired the auction firm to take the unusual step of discouraging bidders from buying the block to break it into singles.

The block boasts “strong grill impressions on each stamp,” Siegel notes, with “a few tiny hinge slivers applied across perforations to prevent any separations.”

An unused block of four of Scott 84 is listed in the 2018 Scott Specialized Catalogue of United States Stamps and Covers at $80,000, with the value printed in italics to denote an item that can be difficult to value accurately.

The block in this sale is ex-Caspary, Lilly, Phillips and Klein, and accompanied by 1975 and 2018 Philatelic Foundation certificates.

The auction offers additional examples of all four grill varieties and the ungrilled issue, along with a selection of essays, proofs, precancels, fancy cancels, hundreds of postal history lots and much more.

The 1863 stamp is used as a strip of five paying the 10¢ rate on an 1868 cover from Yokohama, Japan, to Philadelphia, Pa., carried aboard the Pacific mail steamship Great Republic.

The stamps are tied by a clean strike of the magenta China and Japan Steam Service oval handstamp and a Dec. 23 San Francisco receiving datestamp. Siegel describes it as one of two recorded covers from the Far East with five Black Jack stamps paying the 10¢ rate, those also being the only recorded Black Jack covers with the oval steam service handstamp.

The Siegel catalog provides a wonderful opportunity to review what the auction firm describes as Faust’s “collecting achievement.” It can be viewed online, or downloaded for later study.