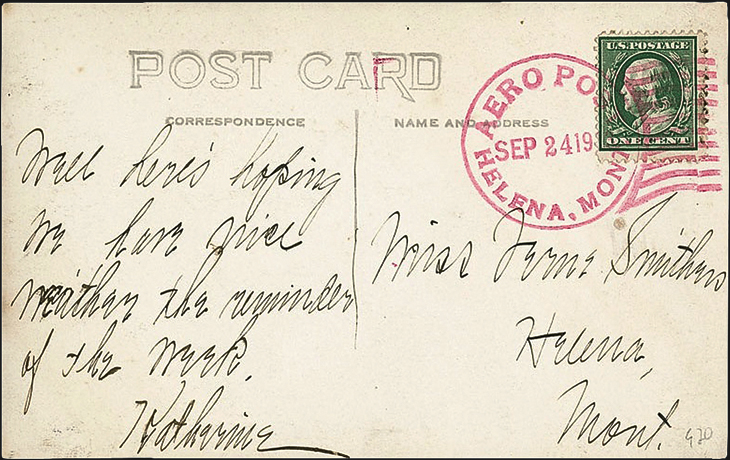 This 1913 picture postcard from Helena, Mont., is written out by pilot Katherine Stinson and comes from the first airmail flight by a female aviator. Stinson is pictured in her plane on the front of the card. The card will be offered during the March 8 auction of the James P. Myerson collection of pioneer flight mail, 1910-16 by Robert A. Siegel Auction Galleries in New York City. 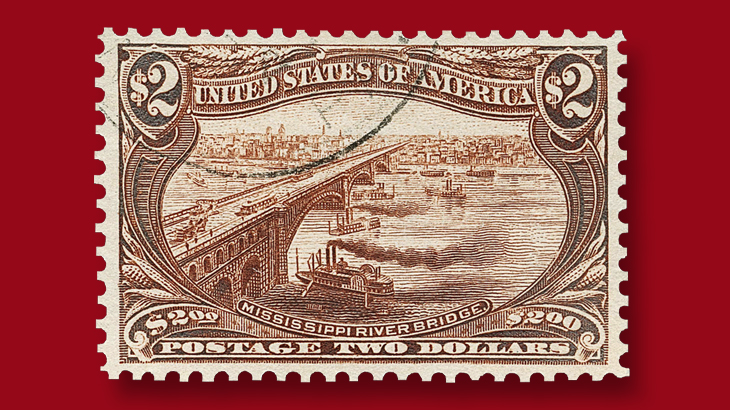 The J.R. Helton Jr. collection of used United States stamps will be auctioned March 7 by Robert A. Siegel Auction Galleries in New York City. The sale includes this 1898 $2 Trans-Mississippi Exposition stamp graded XF-superb 95, the highest grade recorded for the used $2 stamp.
Previous
Next

The 388 lots of the Helton collection of used U.S. stamps open with the 1847 issue and include a nice representation of revenue stamps and other back-of-the-book issues.

The most recent offering among the regular issues is an example of the 1¢ green El Capitan stamp from the 1934 National Parks set (Scott 740), sporting “mathematically perfect centering” that earned it a Gem 100 grade on its 2011 Professional Stamp Experts certificate.

“This is the sole example to grade Gem 100, with none higher,” according to Siegel. The stamp is neatly struck with an unobtrusive mute oval cancel. It is listed in the Siegel sale with an estimate of $150 to $200.

Another graded beauty comes from the 1898 Trans-Mississippi Exposition issue: it’s the $2 orange brown Mississippi River Bridge stamp (Scott 293) lightly struck with a single round postmark. This stamp’s PSE certificate assigns it a grade of XF-superb 95, which no other used example of this stamp has surpassed.

The 2018 Scott Specialized Catalogue of United States Stamps and Covers lists the used stamp at $1,050 in a very-fine grade, but that value soars to $8,500 for the XF-superb stamp in the Scott Stamp Values-U.S. Specialized by Grade listings in the same catalog.

The sale offers 14 lots from the Trans-Mississippi set, including seven examples of the cherished $1 black Western Cattle in Storm stamp.

The Byers collection switches to a selection that is almost entirely unused and mint U.S. classics, with singles, multiples and plate blocks from the 1869 pictorial issue through the 1929 Kansas-Nebraska overprints, plus a few early airmail plate blocks and some additional group lots.

Included is a scarce plate block of six of the 1914 50¢ violet Benjamin Franklin with single-line watermark (Scott 421), just the sixth example of this plate block offered by Siegel since it began keeping computerized records.

The block is valued at $10,000 in the Scott U.S. Specialized catalog, with the value in italics to indicate an item that can be difficult to value accurately.

The Myerson collection takes the action from stamps to postal history — specifically, to the earliest flight mail in the United States.

There is much to admire in the 168 lots on offer, including three pieces described as the first airmail carried by a female aviator.

These 1913 picture postcards postmarked in Helena, Mont., each depict that aviator, Katherine Stinson, and two are addressed and written in her hand.

The catalogs for each of these three auctions can be viewed here, with online bidding options available. PDF catalogs are also online for downloading or viewing.