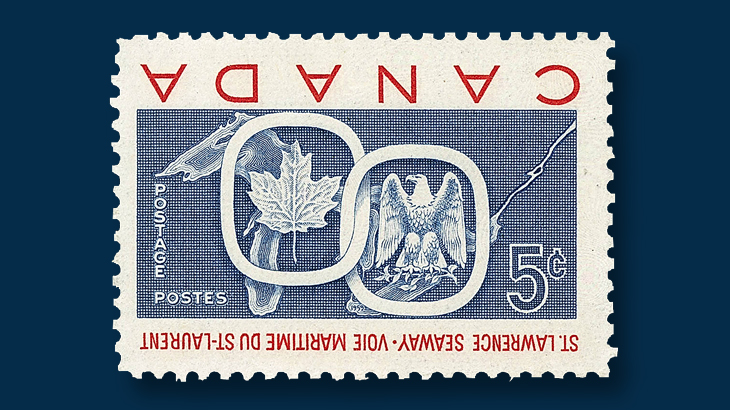 Mint never-hinged example of the Canada 1959 5¢ St. Lawrence Seaway with red inverted (Scott 387a) to be sold by Siegel International. 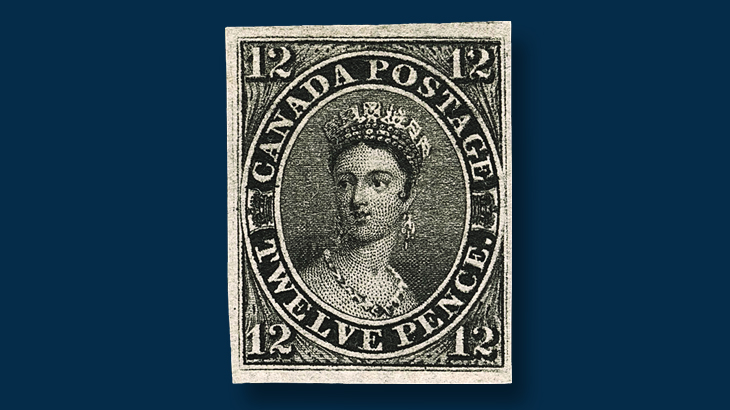 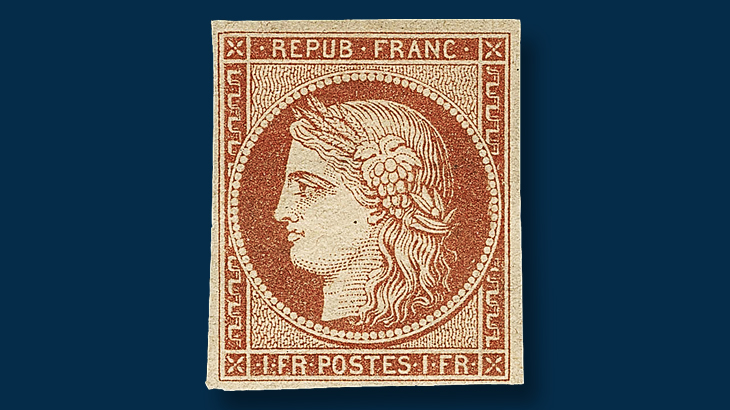 Described by Siegel International as a choice original-gum example of the rarest stamp of the first issue of France, this 1849 1-franc dull orange red on yellowish will be offered during the March 13 auction of the Scarsdale collection.
Previous
Next

A rare philatelic hat trick will be offered by Robert A. Siegel International March 13 when it presents the Calgary collection of Canada.

Leading off the auction are unused examples of the first three Canadian laid-paper stamps from 1851: the 3-penny red Beaver (Scott 1) with no gum, the 6d slate violet Prince Albert (2) also with no gum, and a spectacular example of the 12d black Queen Victoria (3) with original gum, lightly hinged with “large balanced margins all around, intense shade and superbly detailed impression on crisp paper, clearly visible laid lines.”

Though Siegel points out that the 6d Prince Albert stamp is rarer in unused condition than either the 3d Beaver or the 12d black, in this case it is the pristine 12d stamp that commands attention — and the highest value listing, at $175,000.

Siegel’s census of the 12d black records a total of 18 original-gum singles and four pairs, possibly five. This stamp, with “incredible depth of impression,” is ex-Weill and ex-Sir Gawaine Baillie, and is accompanied by its 1959 RPS certificate.

In an auction of 387 lots, these three rarities appear among the first five items presented.

The full selection of this collection extends through Canada’s prominent classic series and well into the 20th century with a selection of significant modern errors.

Among these is a mint never-hinged example of the 1959 5¢ St. Lawrence Seaway with red inverted (Scott 387a).

Siegel reports that about 400 examples of Canada’s most famous stamp error were sold, but that few remain mint never-hinged and without imperfections.

The stamp is listed in the Siegel catalog with its Scott catalog value of $9,500.

Additional offerings in this sale include complete booklets, registration and postage dues, war tax stamps, and other back-of-the-book material.

Prior to the Tuesday afternoon auction of the Canada material, Siegel will offer classic France in part 10 of the Scarsdale collection.

A standout among the 85 lots is a rare original-gum example of the 1849 1-franc dull orange red Ceres stamp (Scott 8a), described by Siegel as the rarest stamp of the first issue of France. The stamp is listed in the catalog with its $95,000 Scott catalog value.

The auction offers numerous unused examples of the classic Ceres and Napoleon issues, plus examples from other series and the back of the book.

The material is being offered at unreserved public auction by Siegel International in association with Charles Shreve, at the Siegel galleries in New York City.

The catalog values mentioned in this article are italicized in the Scott Standard Postage Stamp Catalogue; the italics indicate an item that can be difficult to value accurately.