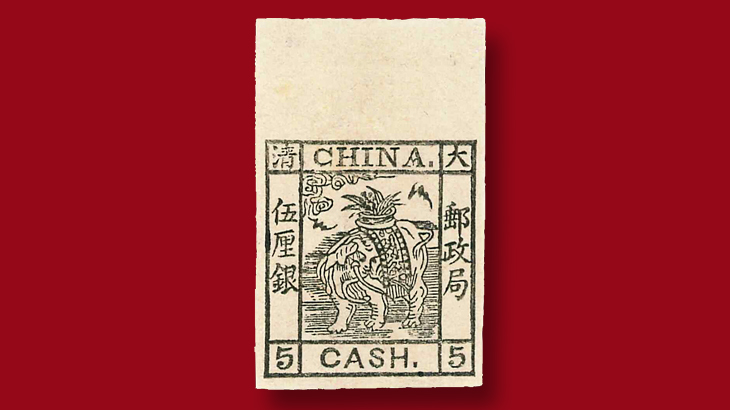 A single of the unaccepted Elephant-design essay of China’s Large Dragons issue sold during Interasia’s Dec. 4-7 auction series for $96,000. 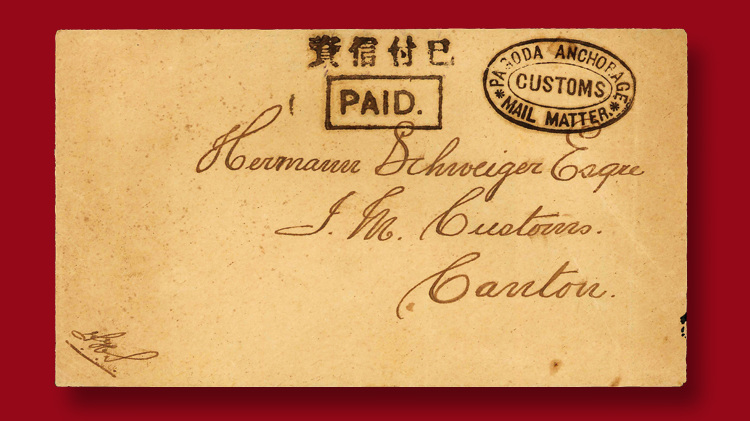 A customs mail matter cover bearing the unique handstamp “Pagoda Anchorage/Mail Matter” from 1897 found a new home for $103,000 during the Interasia auction conducted in Hong Kong. 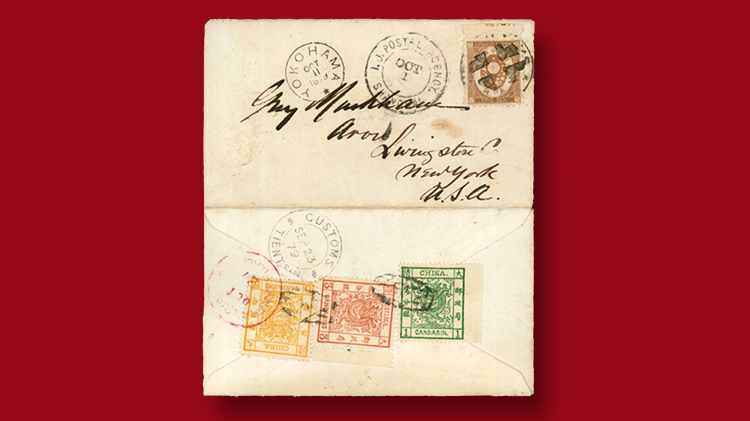 The earliest recorded Large Dragon cover to the United States, franked with the complete first issue of China. The cover was sold during the recent Interasia auction for $295,000.
Previous
Next

Several major auction houses held their biggest sales of the year this past month. Monetarily, China remains at the top.

Highlighting the auction was the second sale of the Jane and Dan Sten Olsson Collection of the First Customs Issue of China: 1878-1885 Large Dragons.

A single of the unaccepted Elephant-design essay, one of 10 known (outside of a recently rediscovered sheet of 100), realized the approximate equivalent of $96,000, including a 15 percent buyer’s premium.

The finer of the two surviving sheets of the 3-candarin Large Dragons essay on thick paper brought more than $206,000.

Two blocks of 10 of the 1883 1c stamp in setting VI on thick paper with clean-cut perforations (Scott 7) were rejoined to create a complete sheet. The auction lot description notes that one block is a variety with the central vertical row of perforations doubled.

This rejoined sheet went to a new owner for the equivalent of $162,000.

This unique cover realized the equivalent of a record $295,000.

An incoming Large Dragon usage to Northern China from Lurgan, Ireland, sold for the equivalent of about $118,000. The cover is one of 22 incoming covers franked with Large Dragon stamps to pay domestic postage. Only four of those covers paid the 6c double rate.

For more than $147,000, one of 11 Hong Kong-Large Dragon combination covers found a new owner.

The largest recorded multiple of the 1882 3c stamp (Scott 5) on cover realized the equivalent of more than $96,000. The six stamps on the cover paid the 18c double rate to Europe; two other covers bearing this franking are known to exist.

Interasia’s auction of the Paramount Collection of the Postage Stamps, Postal History and Postal Stationery of China, 1878-1912, featured an example of the 1c Large Dragon vertical pair imperforate between (Scott 7c). Only five sound pairs of this variety are known to exist. The pair in the Interasia auction garnered the equivalent of approximately $118,000.

Unexpectedly high realizations came from the sales of customs mail matter covers. Official mail handled by customs officials usually bore an indication of such, often in the form of a “CUSTOMS” double circle handstamp. The only recorded example of that type from Swatow realized more than $66,000.

Another customs item did well in Interasia’s general China auction. The unique handstamp “Pagoda Anchorage/Mail Matter” on an 1897 envelope, in combination with a bilingual “Paid” and “Imperial Post Office/Canton” markings, found a new home for more than $103,000.

Interasia’s auction of material from the People’s Republic of China and Liberated Areas sold three sheets of 80 of the 1980 8-fen Monkey New Year stamp (Scott 1586). Two sound sheets garnered nearly $192,000 each, and the last sheet, which had some faults, brought almost $177,000. That equals about $2,400 per stamp for the sound sheets, significantly more than the value for the single stamp in the Scott Standard Postage Stamp Catalogue.